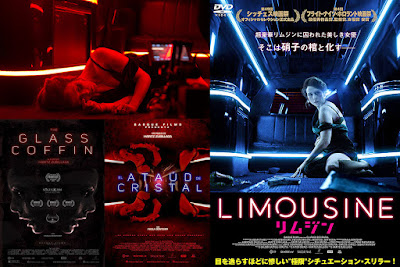 Braindead In A Limousine

Okay, so I’m only going to two films at Frightfest this year because most of the really interesting films showing were screening on the Friday and I really didn’t want to take another day off work because I was expecting to have to do that for both the Raindance and London Film Festivals over the next few months (as it happens, the one film I want to see at Raindance is also on at a silly time which would leave me stranded after the trains stop running so... that festival is going to be a no show for me too, I’m afraid). So one of the films I’m going to this year at FrightFest (after I finish writing this review) is a restored version of something I already know I love. Hopefully my review of that one will be up later this week.

My other choice this year was Haritz Zubillaga’s The Glass Coffin and I chose this one because it’s probably the most intriguing film playing at FrightFest. Intriguing in that almost every minute of the movie is set in the back of a limousine and, while not completely a solo act, the film is almost solely focusing on the performance of actress Paola Bontempi... playing a hugely successful actress called Amanda, who is on her way to accept a lifetime achievement kind of award before her journey to an awards ceremony becomes her personal journey to hell (although, I might argue, sometimes it would be hard to tell the difference... awards ceremonies are a kind of hell themselves). The other reason I picked this one is because the resemblance of the title to a typical Italian giallo of the late 1960s/early 1970s... especially in its original Spanish translation, El Ataúd De Cristal.

The foyer to the screening in the Empire cinema in London (you can call it Cineworld Leicester Square all you like... to me it will always be ‘The Empire’) wasn’t even remotely ‘horrored up’ as last years beautifully disturbing experience in a different venue but I guess that’s all just window dressing anyway. When I got into the screen after perusing and abusing my wallet at the various Frightfest stalls, the music playing over the speakers in the cinema as we were waiting for the director and lead actress to be introduced and for the film to start, wasn’t even remotely trying to portray ‘horror movies’. We had the concert version expansion of the Jaws main title (that’s so not a horror film people... it’s just a shark movie) followed by the opening title music of John Carpenter’s Assault On Precinct 13 (that’s not a horror movie either, of course... in fact it’s closer to a Western) and the lack of genre loyalty in the music choices playing at the FrightFest irked me somewhat, it has to be said.

As it happens, though, it turns out that The Glass Coffin isn’t actually a horror movie either... nor is it a giallo. It’s pretty much just a thriller but, like I said, an intriguing one because of its setting and ability to create a mood in the early parts of the film. Then again, neither is The Villainess a horror movie, by the looks of it... another film I wanted to see but couldn’t make the time it was playing at this year’s festival. I honestly don’t know why FrightFest programmes non-horror movies into their festivals (unless it’s a financial/sponsorship issue) but there you go. I don’t mind too much but then... why call yourself FrightFest? I have only good things though, mainly, to say about the FrightFest brand so I’ll get off my high horse now on that one.

So, yeah, The Glass Coffin is 77 minutes of limousine based action as the popular actress character is urged/forced to do humiliating things for her unseen audience with the threat of the chauffer coming in to beat her up for a bit if she refuses to comply. The unseen presence by the voice in the car on the little camera monitor which she focuses on every time we hear it speak is a bit like Kubrick’s 2001 - A Space Oddysey in that, like the iconic HAL9000 computer, it creates an inanimate and intimidating presence from a harmless looking lens. Well, maybe not quite so intimidating in this case but... whatever...  the intent is there.

The film features an awful lot of ‘in your face’ close ups which is, I guess, what you would expect from a movie set entirely within the confines of a car. The lighting, which seems to have three set colour schemes, actually takes on a personality of its own as the audience, like the character who we are being asked to sympathise with, begins to associate a certain lighting scheme with ‘approaching danger’ and, within the confines of the setting, the director does very well to keep the interest held for as long as he does. It’s a little bit of a one trick pony of a movie, to be fair but, there is just enough variance in the events that happen (one of which seems to be a set piece inspired by the most recent remake/adaptation of Casino Royale) to ensure the film doesn’t flag too much throughout its running time. The lead actress, apart from seeming like a very nice lady in real life (she came on with the director to introduce the movie and succeeded in warming my heart within the space of a minute), gives a remarkable performance here (or number of remarkable performances here... I don’t want to write anything too spoilery for those who haven’t seen it) and was an excellent choice to be able to carry this movie for as long as she does.

In terms of my enjoyment of the film itself... yeah, not so much. For all it’s beautiful direction, colourful and interestingly designed frames, Carpenter-esque scoring by composer Aránzazu Calleja and tour de force performance at the heart of it, I felt the script was a little weak, to be honest. Not in terms of the dialogue, which is fine but... in the story and the execution of it towards a conclusion that isn’t exactly unpredictable, I just felt I’d seen it all before and could have maybe done with a more interesting denouement to the whole affair. That being said, the kinds of people who end up attending FrightFest (myself included, to a certain extent) tend to be quite jaded when confronted with scenes of an intense nature so maybe this was just the wrong crowd, in a way, to be showing this kind of movie to. There is a certain intensity captured in it and I suspect a less ‘horror friendly’ audience would maybe have reacted a bit more strongly to some of the more violent content of the movie than the people targeted at this specific festival (again... the question comes up... why show non-horror films at the FrighFest?) so maybe I’m being a bit harsh and blasé to the whole thing. I’m still processing the movie and am maybe in two minds about whether I really liked it or not but I think, in general, I would still recommend this to people as one to take a look at sometime because of the novelty of the setting and the uncanny ability of the director and actress to hold your interest enough to keep going with it. One to put on your list, perhaps, if The Glass Coffin gets some kind of release in your home country (I don’t know if this one will be getting any distribution here in the UK as yet but... one can hope it does).
Posted by NUTS4R2 at 11:27