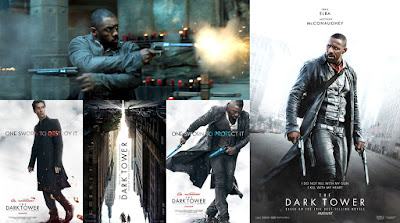 Have Gun, Will Unravel

I actually wasn’t going to bother going to see The Dark Tower, to be honest, with you. Much as I like Idris Elba and the way his character loaded his guns in the most ridiculous, impossible way ever in the trailer, I was  annoyed by the appropriation of Ennio Morricone’s famous watch chimes from For A Few Dollars More (they don’t actually make it into the movie itself, just the marketing) and the negative critical attention the movie got kind of kept me disinterested on the first week of its release. However, a co-worker at my esteemed place of employment suggested to me that, actually, it’s a pretty good movie so I figured that, if I got a chance, I’d try to make some time for it after all (so thanks very much to Tracey S for the ‘heads up’).

Now, I’m pretty glad I saw this one in the end because, frankly, it’s not nearly as bad as the negative reviews are making out and probably doesn’t deserve the poor box office it seems to have had (which in a year where cinema attendances have apparently dropped over 50% to reach their lowest numbers in decades, doesn’t seem like that bad a sin, to be fair, when compared to the performance of the majority of big studio films of 2017). That being said, it’s not without it’s problems and these are not little things so I’ll get them out of the way now.

Now, one of the criticisms that the film is supposed to have is that this really isn’t an adaptation of any in the series of the Stephen King novels it is alleged to be based on. More of a prequel or sequel by all accounts. Now, although I used to love reading Stephen King in the early to mid 1980s when the first of these novels was released, I never bothered with this one because it was in what I quaintly used to call a ‘rip off’ edition... because the page count was very low and so the company who released the paperback here in the UK made the book slightly oversized and charged way more money than a regular novel twice the length to compensate for it. Even in my early teens I could tell a bad deal when I saw one so I didn’t waste what little pocket money I had getting this one. What this means, of course, is that I can’t tell you how great an adaptation or interpretation of the original source material this movie is but, by all accounts it’s not very close so I can understand the negative passion unleashed by fans of the novels at the way this movie has been handled. My sympathies to them on that one.

Not being able to weigh in on that one myself, then, the biggest problem I had with the film was the incredibly appalling continuity. The main child protagonist of the film, Jake, played ably by Tom Taylor, drops his bag of trusty drawings at one point to lock himself in a bathroom and then escape through the window before being chased out of his neighbourhood. When he escapes, finds his destination and travels to an alternative world through a portal, he suddenly has his bag with him again. What? And then, suddenly, within ten minutes, it’s gone again as he seems to lose it between two shots with no apparent explanation. At first I thought the film’s other main protagonist, The Gunslinger played by Idris Elba, was carrying it before remembering that he also had a bag like that left by the remains of his camp fire when Jake stumbles into him. So... yeah... magically teleporting bag is not the best continuity in the world. Now I understand that this may have been the fault of hard editing choices in the final cut but, even so, the continuity leaps are quite glaring here and enough to pop you right out of the movie.

So there you go... that’s my only real stumbling block with the movie. As for the rest of it...

Well, it’s a nice action movie with a very retro feel for us oldsters. It really does feel like a movie which might have been made in the early to mid-1980s (when the novels came out) and if you’re into that kind of feel then all well and good. It kinda reminded me a bit of Back To The Future Part III crossed with The Dark Crystal and... yeah... depending on your age or tolerance for flights of fantasy, then you’ll either embrace this film or shun it. Personally I had a great time with the melding of that kind of, almost innocent, sensibility mixed together with the kind of modern action sequences which have that 'Jason Statham in The Transporter' kind of ridiculousness to it... which I also loved. Seriously, when you see the way The Gunslinger manages to constantly reload his dual six shooters in the blink of an eye or throw revolver chambers up in the air and catch them in his guns, you’ll know exactly what I’m talking about. It certainly stretches the boundaries of credibility and challenges the audience's skills at suspending their disbelief but, you know, in a way that’s what cinema is all about... to show us something we can’t necessarily see in real life (like all great art). So I really have no complaints about that.

The performances are good from all the lead players and that’s especially to be said for the primary bad guy, The Man In Black, played with relish and the usual amount of almost effortless talent by the always watchable Matthew McConaughey. There are also some nicely edited together sequences such as the full ‘bullet fired through the night’ sequence which you will have seen in the trailer in a truncated form but which works better here due to the build up as certain key locations and objects are viewed by the camera before being revisited in the edit of the actual 'gunshot moment' itself. It’s good stuff and, although the film never really manages to raise itself up from being a B-movie kind of affair, it’s a nicely put together B-movie and can easily go toe to toe with a lot of A-list pictures which don’t have the same kind of understanding of the way a sequence is put together (despite the glaring continuity issues in this movie).

There’s also a nicely epic, over the top but very listenable score by Tom Holkenborg (aka Junkie XL) which gives some of the action sequences the required boost when called for. This guy is becoming quite an accomplished film composer and I’m warming to him a lot of late.

If there are some Stephen King enthusiasts in the audience who are not alienated by the deviations from the source material, then there are a heck of a lot of King references dotted throughout the film for them to enjoy. King tends to link all of his books together by having them take place in local locations or referencing events from other books as throwaway comments by characters and the film does the same thing here. For instance, Jake has the ‘shine’ associated with King’s famous novel (and subsequent Stanley Kubrick film) The Shining and a poster pin-up of Rita Hayworth from King’s short story The Rita Hayworth And Shawshank Redemption (filmed as The Shawshank Redemption) is quite prominent in one scene.

At the end of the day, The Dark Tower is not the best movie out there, especially in a year which, even with record box office lows, has given us some very rich cinematic art. It is, however, very entertaining and certainly doesn’t get boring for its ‘not quite an hour and a half’ running time. Certainly, if you’re put off by the negative word of mouth for the movie but you’re not that fussed at how closely it follows the original series of novels then you may want to give this one a look after all. It’s not an entirely unoriginal movie and it even has a few edgier moments that other Hollywood movies might have shied away from. Give it a go if you’re looking for a bit of light hearted popcorn fodder that you won’t have to think too much about. You could do a lot worse.
Posted by NUTS4R2 at 19:26