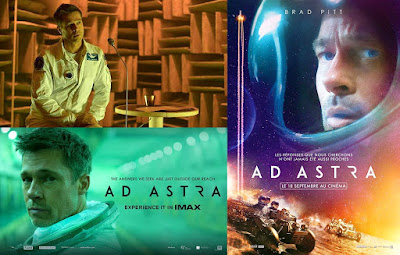 Quite A Mess And The Pitt

This movie has been getting some good word of mouth on Twitter and I have to say that, while it falls just slightly short of being an all time classic, Ad Astra is definitely one of the best films of the year. I have some reservations about it... or one anyway... and I’ll get to that a little later but this one is quite the spectacle. I was somewhat put off that people had been comparing this to the absolute brilliance of 2001 - A Space Odyssey (reviewed here) but I have to say that, in a way, they’re right. There are a few little shots scattered around here and there which, if you know Kubrick’s film well, you'll realise are pretty much done in homage, I think, to 2001... although shot in a totally different way of course. But, yeah, there are some direct references back to the look, or at least content, of certain moments in that.

What I haven’t seen mentioned as yet, although, I’m pretty sure I will be seeing a lot of this commentary fairly soon, is the film’s striking resemblance in terms of tone and narrative structure to Francis Ford Coppola’s Apocalypse Now. This is something I really wasn’t expecting but by about 20 minutes into the movie I realised that this was definitely part of the vibe the writer/director was going for here.

The set up of the film is very close to the Coppola movie (and presumably Conrad’s Heart Of Darkness too, although it’s been so many decades since I read it that I can barely remember it). In the near future and after the start of a series of bursts of antimatter pulses originating from somewhere near Neptune, which almost kills main protagonist Roy McBride (played by Brad Pitt) during the film’s opening sequences, Roy is sent on a mission hopping from Earth... to the Moon... to Mars and then on to Neptune. His father who was said to have died in space decades before, working on something called the Lima Project near Neptune is, it turns out, suspected of being very much alive and probably gone insane. He is the prime suspect for directing these bursts that drain all power from their target and he needs to be dealt with as swiftly as possible, before the bursts get stronger and destroy everything in the universe. So he is obviously set up as the ‘Colonel Kurtz’ figure of the movie and the film is about Roy’s journey, including speculative voice-over narrative which helps bring the Apocalypse Now vibe into the mix, to try and get to his father and stop whatever is going on. Things are quite a mess up there.

Brad Pitt in this is very strong and I don’t know why I’m always so surprised when I see him turn in a good performance. After all, he’s done some great work in pictures like Inglourious Basterds and World War Z, not to mention his absolutely stunning job in Gilliam’s 12 Monkeys. This film gives him some good stuff to work with, playing an almost machine-like character who is nearly always in control and who doesn’t get an accelerated heartbeat, even in times of crisis. Pitt shows the slight flaws and cracks in his character’s approach to life and he gives some nice, subtle shading to a role which could quite easily been a much more clinical, cypher of a part in the hands of certain other actors.

He’s joined by big, acting war horse names like Donald Sutherland and Tommy Lee Jones... plus some really interesting, more contemporary performers such as Ruth Negga and Liv Tyler. Between them all, they and their supporting cast do a terrific job here.

The special effects, quality of the set and prop design and just the overall mise en scène of the thing in general is all absolutely brilliant too and, even though there are a few concepts which threaten to enter more ‘fantasy’ rather than hard sci-fi territory on occasion, this ‘near future’ tale all seems very believable and relatable. It’s got a nice slow pacing but that’s kind of deceptive because there’s a lot of information flying around which has a progressive, emotional effect on the viewer.

For instance, when Donald Sutherland’s character exits the movie fairly early on, he leaves Roy with previously unseen information about the ‘top secret’ mission he’s on and, after this is revealed to both him and the audience, it makes one constantly ‘on the lookout’ for any life threatening situations which could covertly sneak up on the main protagonist and take him... and the audience, by surprise. So, a lot of the suspense comes... not from the actual situations and incidents depicted themselves (although there are some very intense moments, to be fair) but from the expectation that anything or anyone could be about to sabotage that mission and threaten its success in the most terminal fashion.

There’s also... and it’s a very delicate tightrope to walk so, hats off to the director for this... a few action sequences scattered throughout the film and, rather than jar against the tone of the piece, they actually complement and lift the plot rather well. So the ‘space buggy pirates’, not to mention the uneasy tension (due to heightened audience paranoia) of what happens when the crew go to check out a distress signal, make for some interesting moments and hugely enjoyable sequences which don’t damage the overall, less speedily paced nature of the beast.

The score by Max Richter and Lorne Balfe is also quite brilliant, managing to be low key and unobtrusive while still giving you an elevating background hit appropriate to the mostly non-action nature of a lot of the story. I’d love to get hold of this on CD but, as of the time of writing this, it just doesn’t seem to be available. Which is a shame because it’s really cool in the film.

Okay, so far so good. It’s a brilliant film but, for this audience member at least, not an all time classic. Why? Well, the ending just feels a little weak. When Roy finally gets himself to Neptune, by ways I won’t reveal here, the state of his dad and the real issue that is causing the pulses are... well... they’re a bit anticlimactic, to be honest. I did feel kind of short changed after such a sense of foreboding had been kept up throughout the movie and, to add insult to injury, the last ten minutes or so just seemed like Hollywood wanting to please audiences by giving a much nicer ending than any of the characters had a right to expect. So there’s that and it’s why, for me, Ad Astra is a great movie but not a classic. Maybe the ending will grow on me when I watch it again (which I certainly will be doing when I grab the Blu Ray) but, for now, I was a little deflated by the time I got to the final credits.

Ultimately though, if you like science fiction movies then you’re in for a treat with Ad Astra. Definitely go and see this one on as big a screen as possible because it’s fairly spectacular and, the journey to the home stretch is a really great cinematic experience. Like I said earlier, it’s easily one of the best films of the year and you can count on it being in my year end list when the time comes. Go see it.
Posted by NUTS4R2 at 18:58