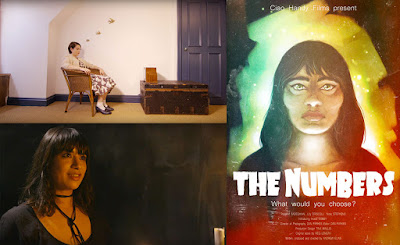 When Your Number’s Up

The Numbers is a fairly recent ‘novella’ of a horror movie (moviella?), written and directed by Andrew Elias and it’s one of those movies which showcase exactly what the British do best... make relatively fun and entertaining films on what was probably a more than modest budget.

It’s rare I watch films like this (or am given the opportunity, to be honest) but I’m glad I managed to see this one because I’ve been following Andrew and his company on Twitter for a while now and it’s always good to see what some of the people you follow have been up to. This film seems to be trying and, for the most part succeeding, in catching the lightning in a bottle that was last done in this country successfully in the late 1960s and early 1970s. That is to say, we have almost a pseudo-portmanteau horror film but with a thread that runs through each chapter and fashions it together as one arc. You know, the kind of movie that Amicus and Tigon studios were so good at pulling off back in the day.

The Numbers starts with some nicely striking opening titles which have a beautiful piece of demonic music courtesy of composer Reg Length playing through as the camera hones in on some white cliffs at a, possibly, ‘day for night’ version of  twilight and then, through the miracle of distracting the viewer with superimposed clouds, to a mansion house and then on through a window to a man played by Andrew Elias himself. This first and very short sequence is labelled up as 1912, which is when the action takes place and it bookends the movie. This segment is also dialogue free (up until the last shot when we revisit it at the end of the movie) and it shows a man waiting for something uncertain and reading a book called, An Evil Motherhood. Which might possibly explain what he’s waiting for.

Every now and again we are made aware of the presence of his servant within the house but the way the sound is designed and the faceless path of the servant sometimes being used almost as a jump scare in terms of rushing by very fast in the foreground of the camera or staying close to an edge of the frame, is already using the language of the horror movie within its DNA. The first part of the segment ends when the main character finds a calling card on his noticeboard for a fortune teller called Madame Mimi.

The shot style of the movie is fairly clean and, quite often, favouring centre oriented set ups. There’s no clutter to the set dressing (something which sometimes works in favour of a scene and, sometimes not) and the whole thing gives off a very measured and self assured kind of pacing. There are also a lot of browns and blacks used in this opening sequence and a nice colour palette is established here but, of course, that palette is changed and pitched differently depending on which section of the movie you are watching.

The next chapter starts, as do they all, with a time check in terms of the year and a seemingly random number which will have some significance later on in the chapter... the second sequence is called 1955 - Twelve. This section concerns a young woman who is, as she tells her friend who works in a restaurant, going to see a fortune teller and we can see that her card is exactly the same one we just saw in the film’s 1912 opening, implying that the fortune teller in question is either ageless and therefore extending her life through supernatural means or, possibly, she’s travelling in time... but I place less stock in that second theory since the film is tonally slanted with a good old fashioned horror vibe.

The meeting with the fortune teller does not go as planned and the customer ends up being told she is going to die when the hands of the clock point north. So the majority of this section, which is again mostly dialogue free, gloriously so, is the woman waiting in a room and killing time until the perceived hour of her death. One of the things she does while she’s waiting is read a book called The Devil In Woodford Wells by Howard Hobson, which is important to the next mini story in the film (and which is, in fact, a real book). She leaves the fortune teller’s card in this before the end of the episode, which takes place in a wonderfully red corridor and lift area, almost, it seemed to me, trying to capture tonally the spirit of Stanley Kubrick from his film The Shining.

The woman, is played by Lilly Driscoll, doing a wonderful job throughout her short, especially when it comes to the solo scenes. The fortune teller, Madame Mimi, is played by someone called Peyvand Sadeghian and she’s one of those actresses who seems to be able to bring a certain, playful yet forceful presence to a role. She’s well cast as the fortune teller, who appears in all the segments of the story without, as you would expect from the set up, ageing at all.

So the second chapter is called 1983 - Six and it concerns a composer played by Nicky Stephens. He can’t get the last part of a composition he’s working on and swears a lot throughout the segment, although he’s probably the most likeable character in the film. When he goes to a second hand/Antiquarian bookshop to help clear his block, he stumbles across the same copy of The Devil In Woodford Wells from the previous segment and, of course, finds the card and goes to the fortune teller, Madame Mimi. This is probably my favourite segment of the movie, to be honest and I love the little Faustian deal references symbolised by the purchase of the book in question (with a crisp, one pound note... aaah, I remember those). There’s also a terrific denouement in this section which, I really should have seen coming but... just didn’t. So that was cool.

That being said, there is, I think, at least one anachronism in the book shop scene, where a poster for the reissue/film re-release tie in album for The Beatles Yellow Submarine is the poster from a decade or two after the time setting on this segment. However, I do like this sequence in the bookshop and absolutely loved the use of colour in this scene. Where the orange covers of the old paperback Penguin Classics are echoed in the shirt of the bookseller and in the tie of one of the other customers.

I also loved a scene where the composer is playing the piano and all of a sudden the diegetic source music of said piano transforms, after the introductory bars, into a version with all the synthesised instruments in place, as if we can hear what the composer is hearing in his head as he finds his tune. Lovely stuff and, hold that thought because the director does the same thing only in reverse at the start of the next segment, again presumably using composer Reg Length’s remarkably fun score.

Okay, so the third sequence is called 2018 - Zero and it involves a jogger, played by Howie Cobby, who we are introduced to as he runs along some sandy cliffs. Here, the music on Length’s score matches the pace and time setting of the segment with some up tempo, almost techno music. However, in a reversal of the technique used in the earlier scene, we have the non-diegetic soundtrack turning into diegetic source music as we come to realise the music is also what’s being pumped through Cobby’s earphones as he’s running.

And, of course, when he trips and falls on the sand, as his character seems prone to do for some reason, he stumbles upon an almost empty wallet half buried there with, you guessed it, Madame Mimi’s card inside. And this is where the film gets even more interesting... when he takes the card to the pub and has a chat with the landlady there to seek her advice, played really nicely by a lady named Jo Burke. The pub landlady starts telling Cobby about her former experience with an on-stage fortune teller and, as she does so, she is transported into an empty scenario of the theatre where this event happened, along with the ambient sounds of the memory she is recalling. It reminded me a little of Fellini, actually, in terms of where films like the glorious Nights Of Cabiria (reviewed here) would have a brief diversion from the tone of the rest of the movie. Specifically the scene where Cabiria goes up on stage during the hypnotist act and the film kind of stops dead and takes a little tour into another kind of magic before continuing on its course. I loved the whole feel of the scene as Andrew Elias presents it in The Numbers and it’s just one of many quirky little moments that give the film a real lift.  And stuff like this, coupled with a truly beautiful, overhead shot of Cobby running along the top of the cliff, is another thing which marks this director out as a having a visually unique way of putting a sequence together. Not to mention being one of the reasons why films like The Numbers deserve to get a proper cinematic release, instead of wallowing in the world of the electronic download... but I’m not going to get into that here.

After this sequence plays out, we end with a brief epilogue taking us back to that opening sequence, this time with its full title revealed as being... 1912 - Two. Once again, I’m not going to tell you where this sequence ends up but I will say that the last shot of the film, which I mentioned briefly earlier, does leave, perhaps, more questions than answers and it’s nice to know that Elias is one of those story tellers who prefers not to spoonfeed his audience and allows them to either work things out themselves or bring their own baggage and interpretations into the mix. At least, that’s the way it seems to me.

But don’t take my word for it, check it out for yourself. The Numbers can be purchased or rented at Amazon on this link here and the Ciao Handy Films trailer for The Numbers can be found on YouTube here.
Posted by NUTS4R2 at 18:56