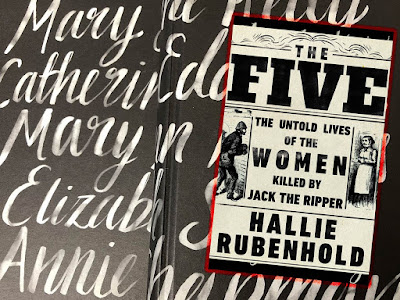 This is another book which I noticed sailing past me on my twitter timeline, just before its publication earlier in the year and, I have to say, it’s kind of unique in terms of where it exists in the wealth  of written material on the unsolved (officially) and notorious murders allegedly committed by one person, Jack The Ripper, in the late 1880s. I say allegedly because of these five victims... Mary Ann Nichols, Annie Chapman, Elisabeth Stride, Catherine Eddowes and Marie Jane Kelly... there’s no concrete proof that they all victims of the same person. Although they are generally believed to be but with the way the different districts of the police in those days didn’t cooperate with each other, a lot of the personal testimony that may have thrown light on this matter is, it would seem, lost. Or at least it would appear so to me.

Hallie Rubenhold’s new book, The Five - The Untold Live Of The Women Killed By Jack The Ripper*, is an important book about Mary, Annie, Elisabeth, Catherine and Marie because it gives something of a real biography, in some ways, to their lives and is something which should hopefully be a big stone weight of a tome when it comes to people writing on The Ripper in future and dismissing the majority of these ladies as ‘sex workers’ or ‘prostitutes’. I say dismiss because that is what people sadly seem to do still with women in that profession although, personally, I’ve always had a kind of admiration and respect for the striking characters who choose to commit to that job... as much as any other job.

What I’m trying to say is, The Five is a very special book. Not only because it challenges and cuts through some of the myths about the canonical five victims but also because, actually, it barely mentions Jack The Ripper... which is no bad thing. I probably mention him more in this review, even.

This book is exclusively about these five women and the multiple chapters which make up each of the five sections about their lives only mention their demise briefly in the last page of their individual stories. There is a little more said about Jack himself in the conclusion of the book but nothing which actually glorifies his (or their, depending on your theory) actions and this is totally not about him. Perhaps some of the regular readers of paraphernalia about this dark historic character may be put off by the lack of inclusion of this, admittedly, iconic figure from a book about the victims... where not even the details of their demise or the wounds they received are barely touched upon in an effort to divert attention away from their killer. However, I will say again that this account of the lives they had before they collided with their final fate and fatality is an absolutely essential piece of writing if you want to know more about, not just the ladies in question but also the kind of lives people were leading at that point in history.

Make no mistake, this is an absolutely brilliant book to get to know the milieu in which these five victims lived and struggled to survive in Victorian society... not all of whom were born in this country... so there’s also some background on attitudes prevalent in other countries in the 1800s which is of some interest. And it was a real eye opener to me. I’ve been on a couple of the Ripper Walks around the Whitechapel area and I’ve had a picture built up to me of what it was like to live in those times but this book really adds detail to the experience. Not just about the harsh... very harsh... realities of trying to survive each day in that kind of existence but how the decks were stacked even more against the ‘fairer sex’ of the era and how attitudes of ‘proper behaviour and conduct for a woman’, even in times when it was a struggle just to find somewhere to sleep for the night for many, were a huge impediment to people every day.

That was one of the big eye openers for me when I read this tome... just how much social attitudes against women were flying, often in contradiction to common sense and then the realisation that, as Mrs. Rubenhold makes mention in her conclusion, many of those same attitudes towards women are still with us today, albeit sometimes more subtly and less overtly woven into the fabric of our times.

This book is like a history lesson I never had (for me especially because I never used to pay attention in my history classes at school) and brings me closer to the lives and times of those struggling with the hardship... both for men and women... of everyday living. It also made me aware of some of the skills and talents (creative talents, in one case) of the ladies specific to this account and above all, made me question my own small knowledge of this human blight on Victorian London known by many as ‘Jack’.

Now, I’m going to say that there’s a lot of speculation in this book in some ways but it is minor and mostly in the way of educated deductions more than anything else. You will find a fair few sentences using phrases such as... “x would have” and “it was likely that”... but, despite the streets of London being a little more well lit than I was given to believe in places (I was under the impression that places like Mitre Square were actually pretty much pitch black at night), this all seems to be a pretty common sense set of deductions all around, based on unearthed accounts of the time. And what this leads to is the inevitable conclusion that, with the exception of one or probably two of these five, the victims of Jack The Ripper were not, as I said earlier, ‘working prostitutes’ (not that there would be anything wrong with that if they were, in my book). They were lumped in as such due to sloppy assumptions made by various police investigations of the time and the lack of people coming forward to verify or disprove that over the years has meant that the legend rather than the truth has been printed, to paraphrase a famous western movie that I’ve still never gotten around to watching.

Although probably not all of the facts are obtainable, Rubenhold does an absolutely brilliant job here... not just of piecing together the path of these five ladies’ lives and making them of such interest but, and this is no mean feat, using her own knowledge and experience of the world of art, literature and history to recognise certain connections where they exist and using these as examples to illuminate and embellish the various environments in which these ladies and their lovers and children, mothers and fathers, walked their everyday paths.

My biggest criticism... or bafflement if you like... is one I mentioned to the young lady in Waterstones in Enfield Town when I bought the book back on its release, earlier this year. Why the heck is the dust cover on the beautiful UK edition an inch shorter than the actual height of the book? Was this some kind of artistic statement, flying in the face of good, honest page protection? Was it a printer’s error or a fluke of untamed graphic design? I’m not sure why that’s the way the book is presented but, either way, it certainly doesn’t look unattractive and if the publisher has decided that this is the way a dust cover should be... an ornamental rather than functional beast, then it’s not for me to quibble.

What I will conclude, however, is that between those dust covers lies an absolutely remarkable, entertaining and illuminating piece of well researched work. Wether you are familiar with the crimes purported to be committed by the one guy or not, The Five - The Untold Live Of The Women Killed By Jack The Ripper is a stunning piece of work and something which deserves to be read and which almost dares future Ripperologoists to not take heed of the important illuminations therein. Easily a book I would recommend to most and, for me, a much needed and appreciated history lesson on the way a certain section of society were living their lives in the 1880s. An essential and gripping work which deserves to be read by many.

*In the US this book is, for some reason, entitled The Five - The Lives Of Jack The Ripper’s Women... which seems somewhat disingenuous to me in regards to what appears to be the intent of the author of this book. It perhaps, though, reflects the difference of our own culture in sharp contrast to certain overseas markets.