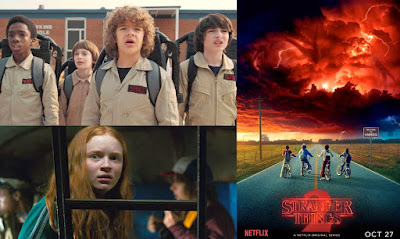 Okay so... people who read my review of Stranger Things (which can be found here) will know that I... well I didn’t hate it, I was just mostly not impressed with it in any way. Well, all that changed when I finally got access, via a friend, to Series 2 recently. It’s a real change of pace for the show, I felt and it almost feels like the clichés were all gotten out of the way in the first season so we hit the ground running on this one, immediately picking up from the loose end that Will Byer’s was left with ‘something’ from his experiences in the ‘upside down’.

This season won me over very quickly and it was great when you see the montage in the first episode as the four friends (minus Eleven) are seen making preparations for Halloween and go as the lead characters from Ghostbusters. This one felt a little more like the 1980s as I remembered it... in that rose-tinted nostalgia vision we all have for the decades we are growing up in and it was especially nice seeing the kids saving (and stealing) all their money to go down to their local amusement arcade to try and beat the new ‘animated video game’ sensation Dragon’s Lair. For those too young to remember, this was kind of an experimental game using proper cartoon footage which, if I recall correctly, cost about 5 or 10 times more to play than any of the other video games in the arcades, was way too expensive for me to play more than once and... always seemed to have a queue next to it.

Things like this heroic fantasy themed game would be important to those kinds of kids though and I appreciated the nostalgia hit here.

So, onto the plot and... it’s one of those again where you have a few different ends of ‘this season’s problem’ being solved by different sets of regular characters. This one involves a super intelligence, the mind flayer (named after a character from the Dungeons And Dragons manual), who has an army of growing demogorgons (the kids only had one to deal with last season) who are inhabiting an offshoot of the ‘upside down’ which has manifested and grown under the town of Hawkins and who the kids have to find a way of stopping... both helped and hindered by Will Byers, who has the intelligence of the mind flayer sitting inside him, using his mind and body as a host organism. We also have Eleven, who has been secretly living with the Sheriff of Hawkins, who runs off to pursue her own issues and has adventures in the big city, before finally reuniting with everyone at the end of the penultimate episode like the cavalry as she turns up to... if they’re lucky... kick some demogorgon butt by closing down the gateway to the ‘upside down’.

So... lots of things going on and, as you might guess, it’s riddled with loads of 1980s references and even the music, which is usually somewhat inspired by the sound of John Carpenter’s scores anyway, it seems to me, has a couple of moments in Eleven’s big city adventures with her soul sister who also exhibits special powers, where it either goes into a cover version or, more than likely, is straight needle-dropped in from one of my favourite cues from the score to Escape From New York. So, yeah... very much more my kind of thing, this series.

There’s even a new bully character... since the class heavy from last season turned out to be one of the nice guys after all and is now a protector for the main protagonists... and this new guy, who’s sister is the new love interest of one of the kids, is seriously channeling the vibe of Judd Nelson from The Breakfast Club, including looking just like him.

And yeah, good acting from all around including  Caleb McLaughlin, David Harbour, Finn Wolfhard, Gaten Matarazzo, Millie Bobby Brown, Winona Ryder and Noah Schnapp  but, also, a couple of new characters played by Sean Astin (presumably here because he was in The Goonies, a film I’ve never seen) and Paul Reiser... who seems to be both channeling and also atoning for his role in James Cameron’s ALIENS here. And talking of the A L I E N universe, there are an awful lot of references to various films in the franchise here... or at least the first two... with a particular Harry Dean Stanton skin shedding scene coming to mind at one point in the narrative.

So yeah, I was all over this one and watched it through fairly quickly... although I’m already a season behind again and am not sure when I’ll get access to the third series. This one also has a kick ass final shot which, more or less, has been seen all over the show in the form of a sketch, as the writers revisit some of the tropes from the first series... such as a new bully character and, instead of Christmas tree lights being used as a communication device, we have gazillions of abstract sketches which, when taped up all over the house, give a map of where the creatures of the ‘upside down’ are living. And tonally it plays out exactly like the first series, with the same ‘will they, won’t they’ romance beats and concerns of the main characters. I was surprised at one of the scenes of bloody aftermath when one of the new characters is feasted on by a few demogorgons because, I dunno, we’d already seen it happen once and for some reason the camera decides to back to the carnage, perhaps to explain to the audience that, yes, this character you all worked so hard to accept and started to like has now been shredded but, I dunno, the style of the content choice on that moment seemed a little out of place here.

Still, other than that, Stranger Things 2 is a much better incarnation of the show and, like the series itself, this review is a little short, I’m afraid. Looking to see how the series progresses now and kind of hoping we don’t just get more of the same in the third one because, yeah, this particular set of manifestations of the ‘upside down’ has been a little done to death now, I think. Check this one out if you have the time to binge.
Posted by NUTS4R2 at 19:16