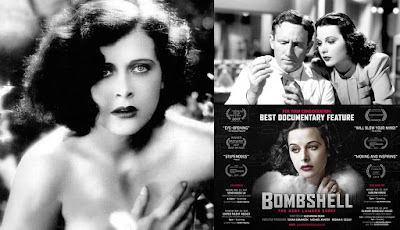 Just a brief note of a review to give some praise to this film, which had a short theatrical release last year in the UK. Written and directed by Alexandra Dean, Bombshell - The Hedy Lamarr Story is a kind of love letter of a documentary to the once famous Hollywood star and is a culmination, it seems to me, of various people trying to redress the balance of a life once lived where a person's beauty and public personae was a blindfold to the true genius of the individual in question. It also reveals how the US government, it seems, cheated that star out of both reward and recognition for something which was secretly put to good use and which, when one looks at the benefits of just one of her achievements, has been a boon to mankind since the lady in question first put her mind to it.

But I’m getting ahead of myself a little.

This documentary starts at her beginning, shortly after Hedy’s birth as Hedwig Eva Maria Kiesler in 1914 and highlights the things which helped shape her personality... such as her inventiveness being due to her admiration for her father, who meant a great deal to her. Also, it mentions her experimentation with the effects of her beauty on people and her frequent visits to a local photographer to take various shots of her... many of them ‘arty’ in nature (and by arty, perhaps I also mean revealing). Then the determined pitch to be in movies in her own country which, of course, built up to her infamous nudity and orgasm scenes in Ekstase (1933).

The film also documents her various marriages including her first, to a prince, which was so stifling that she eventually slipped a sleeping draft into one of the maid’s drinks, swiped her clothes and rode off into the night on her bike to avoid discovery as she exited that marriage and then tried to get into motion pictures... at first turning down Louis B. Mayer of MGM’s offer before then hopping onto his ship going back to Hollywood (along with a load of cheaply signed starlets going with him) and ensuring she got herself noticed enough by him that she could almost name any deal she wanted. The film also documents her decline in later years, as the hardworking Hollywood ethos of drugs to keep you awake and then make you sleep, such as what was being done to many of the workers to keep them going (famously, even child actors like Judy Garland and Mickey Rooney), took their toll on her personality and her status as a single mother in the 1940s. Not an easy life to live.

And, of course, the film also makes much of her brilliant invention, co-created with composer George Antheil, where she came up with the idea of frequency hopping to stabilise the course of guided torpedos and stop them from being jammed. The military turned the patent down but evidence has since come to light that they were using these ideas on their stuff all the time and, when it was later followed up to get the patent back from the Navy, the word came through that it belonged to them and they could do what they liked with it because, technically, Lamarr was an ‘alien’. This shocking attitude towards somebody who was, by this point, a lady and patriot of America. Someone who had sold unbelievable millions of dollars in war bonds for the American government due to her appearances (something which a lot of movie stars were doing at the time).

The film is presented to us by various people giving commentaries... a few of them famous movie personalities themselves such as Diane Kruger and Mel Brooks. However, the majority of the interview clips are from relations of the lady, such as her son who the film focuses on quite a bit and, surprisingly for a film of this type, from the lady herself as a reporter, who is also in the film a lot, has unearthed a lost, taped interview he conducted with Hedy many decades before and which is used as a complement to the voice-over narrative on the film. So you do hear a lot of her, ‘in her own words’, so to speak, looking back over her life.

The film is pretty interesting and just about varied enough in its execution and enthusiasm not to get dull and to hold the interest throughout. Much is obviously made of her unique invention of ‘frequency hopping’, which is used as the basis for mobile phone technology, bluetooth, satellite navigation etc and all that stuff is really interesting. All that being said, though, we don’t get to hear about many of her other inventions throughout the documentary and I really wanted to know more... although I think the cooling cube which she thought of as a failure due to information she was unaware of about the difference in water between various states, was a pretty cool idea. I mean, she was so often coming up with stuff that her friend Howard Hughes set her up with a miniature version of his own laboratory when she thought up the concept of swept back wings to help make his planes go faster, after doing a bit of research on fish and birds (which is deftly illustrated in this film)... so it would be really nice to see what else she was dreaming up.

Jeremy Bullock and Keegan DeWitt’s score is a little like the music of Philip Glass in its approach and that’s not a bad thing... but everybody seems to be trying to sound like Glass or sometimes Nyman in their documentary movies these days and it seems a shame that this is the only kind of score we are getting for these kinds of things at the moment. That being said, you can’t fault it and I would have quickly plonked down the money for a CD of this thing, had one been available.

Well, I said this was a short review and I wasn’t lying. Bombshell - The Hedy Lamarr Story is extremely entertaining and informative, at least to the point where it whets your appetite and makes you want to go and read one of the books currently available about the lady. On the surface it would seem that this is not the most likely subject for a documentary movie but, once you step back and think about the import of Ms. Lamarr’s contribution and her legacy to the world we live in, it does make you stop and think how long it would have taken for somebody else to come up with the idea. Definitely worth a watch as this lady’s story deserves to be better known.
Posted by NUTS4R2 at 19:12