The Saint Meets The Tiger 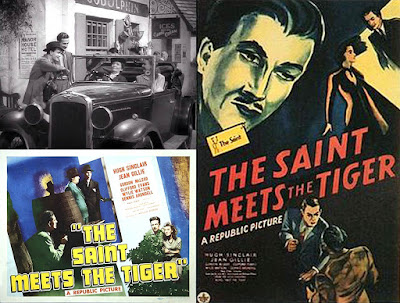 Well I do believe my last review of The Saint’s Vacation (which you can find here) did leading man Hugh Sinclair a bit of a disservice... considering he shot this in the same year, 1941. I believe that, although novelist Leslie Charteris could write great dialogue in the novels, we saw from that last one that his screenplay writing skills were a little less entertaining. At least it seems so to me. However, this screenplay wasn’t written by Charteris and it kinda shows. The Saint is much more clever with his words here... just as he is in the books, ironically... and this one is based on the very first full length Saint novel, Meet The Tiger.

Now I read this maybe 35 years ago and remember really loving it (enough to buy a load more from the second hand bookshop I used to frequent after school on Thursday afternoons) but I really can’t remember much of it now, it has to be said. So as an adaptation I’m not sure how it cuts it but I certainly enjoyed this a lot more than the last entry in the series (it was technically still a part of that series... I’ll get to that in a minute) and quite a bit better than a few of the other ones too.

Now The Saint Meets The Tiger was actually shot by RKO, who had been distributing the movies up to this point. However, when it was shot in 1941, they were looking for a replacement for The Saint series (because the rights would be too unnecessarily expensive to renew) and so they created The Falcon series and George Sanders jumped ship and became the title character in the first of the films, The Gay Falcon (which I will review at some point in the, relatively near, future). However, the character, despite being loosely based on some source material, was pretty much turned into a version of The Saint in all but name and Charteris didn’t like this one bit. He sued RKO for ripping off his character and, in the wake of all the legal shenanigans, this film got put on the shelf for a couple of years. When it was finally released in 1943, the British arm of RKO distributed it over here but they cut a deal with Republic Pictures to release it in the US. Despite the DVD I watched of this being an English edition, this one has a US print with the famous Republic logo at the start.

This one is great though. It’s fast paced and, despite still having that completely unsaintly moustache, Hugh Sinclair really makes the part his own here. He has good on screen chemistry with Patricia Holm (The Saint’s girlfriend for a while and who he first meets in this book as he does in this film), played by Jean Gillie... as he does with Wylie Watson as his butler Horace and Clifford Evans as reporter Tidemarsh. And, of course, some great scenes opposite Inspector Claude Eustace Teal, played once again (for a third time, I think it is) by Gordon McLeod... who also seems to make the role his own.

The plot is an intriguing one dealing with a million dollars worth of stolen gold and how to find it and get it away from the arch criminal, The Tiger. Now, the one thing I remember from the novel was that The Tiger was more or less The Saint’s equal. The same kind of intelligence and rationality but with just a little less of the good samaritan about him when it comes to his acts of robbery. The Tiger comes across similarly in the movie and he even stops The Saint from being killed by his minions, wherever possible. You get a real sense of two adversaries sparring from similar backgrounds with this tale and it’s almost a shame when, at the end, the villain of the piece gets his inevitable comeuppance.

The movie starts off strongly with a phone call from a man who needs Simon Templar’s help. When he turns up at his door a few minutes later, he has been knifed and, more or less, dies in The Saint’s arms after dropping a few choice clues as to where he should look to uncover the mystery. So, Templar and his butler make for Cornwall... which is a curious place as represented in the movie. Half the times when the car drives into a street, for instance, it seems clear that they are on a set... other times it’s clear that real location shoots are being used. There’s even a nice mix where some kind of matte painting slide is used to give what is probably a studio set, the impression of cliffs behind sea.

However, all the dotting about between sets and locations doesn’t stop this one being a thrilling ride and when Pat starts helping out Templar after he exposes one of the villains working for The Tiger, just before he can swindle her out of a load of money, she goes all out to help him. We also have an undercover Inspector Teal who even, at one point in the proceedings, actually manages to pull the wool over The Saint’s eyes, for once. Which is kind of refreshing.

All this is helped on by a rather lively set of stock music by various musicians but which sound, it has to be said, very 'Republic' in nature. The score gets very enthusiastic at various points and is not subtle at all but, somehow, it manages to keep it all afloat nicely without making itself sound too silly. The IMDB credits Roy Webb as being in on the music but, certainly on the print I saw, I couldn’t find his Saint theme anywhere... so I’m not 100% sure on this.

This was, almost, the last film in The Saint series that RKO had anything to do with although they did, indeed, distribute the next movie in the US, which saw the return of Louis Hayward who was my favourite version of the character from the very first RKO movie The Saint In New York (which you can find reviewed here). However, that final movie, produced by England’s famous Hammer studios, was not released until 1953 and, amazingly, is still not around on commercial DVD as far as I can see. However, I hope to have a review of this next one up for you very soon. I just hope Hayward was as good in the role after an absence from Simon Templar of 15 years. I’ll be able to tell you the answer to that very soon, I suspect.
Posted by NUTS4R2 at 18:54