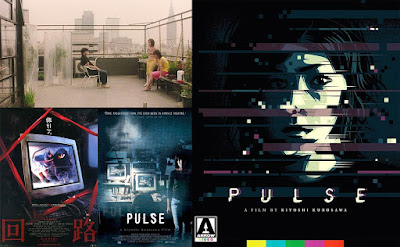 Pulse was a bit of a mystery for me when I dove into the latest Arrow Blu Ray transfer of the movie from a year or so ago. For one reason... because I'd somehow never really heard of it before (or possibly I just forgot it).

That's a puzzle in itself because, back in the day, I used to be really into the whole j-horror thing. ‘Back in the day’ being when Ringu (the original and pretty much only great version of Ring) hit UK cinemas in the year 2000, two years after its first run release in Japan. It was a scary film and it wasn't too long before I was hooked on cinema releases of great Japanese horror movies such as Ju-On (aka The Grudge), Dark Water and The Eye.

Also, with the old DVD distributor Tartan Video picking up these and a whole host of sequels and close kin to these movies, it was a really great time to be getting into these kinds of celluloid horrors. Of course most, possibly even all, of those movies were destined for US remakes which I quite happily ignored, fairly safe in the knowledge (according to reports) that they were dumbed down, less interesting ‘knock offs’ of the originals.

One such remake, however, was indeed a US reworking of Pulse and so, like I said, a bit of a mystery that I'd never really registered this movie in my consciousness up until this Arrow edition although, it has to be said, I should maybe give the US remake of this one a go sometime in case it actually sheds some light as to what the heck this disjointed film was about, to be honest.

The film starts off with one set of characters who work in a nursery and one of them goes to investigate why a colleague has not turned up for work. After finding him at home but acting very distant, she gets distracted looking for a crucial disk at work and then turns around to find he has hanged himself. She takes the disk to the office and some mostly vague shenanigans occur which are almost but, not quite, spooky.

Then we switch to another set of characters who, to my stupid gaijin eyes, were the same characters I'd already been following except they were suddenly students and not office workers anymore. Once I'd twigged the various character occupations and environments, I found it a little less puzzling to follow what was going on but, honestly, no less penetrable in terms of what the heck was supposed to be unfolding in terms of story content here.

As far as the story goes, it seems to be a tale about people getting turned into ghosts after just having some contact with spirits. The internet is somehow a transmitter (or maybe not, I couldn’t figure it out) and this strange spate of ghostly manifestations seems to have been started by this truly confounding attempt at an origin tale which starts with this guy in a building somehow realising there's something wrong with the electrics? So he uses red sticky tape to seal the edges of all the electrical boxes in a wall but then the place gets demolished and so the electricity, or whatever the heck it is, is free to slowly infect the world.

So... yeah. Anyway, our two sets of main protagonists are slowly whittled down to one male in one group and one female in the other group, as their friends are methodically "ghosted" one by one until only they are left. And not only are they the only ones left in their respective groups within the story but also, when they look around them after a while, it seems they could be the only survivors of their immediate neighbourhood... possibly the world.  It's almost like Gojira (aka Godzilla) has been stomping around the country but without anyone seeing him and with no real signs of damage other than the black stain left in the wake of people as they suddenly turn into lonely ghosts. Hmmm... maybe there's a metaphor in there somewhere but I couldn't really be bothered to reflect on it by this point in the movie.

The way the film is put together is kind of a frustrating thing too. The director is, like many directors I've been looking at lately, kind of obsessed with sectioning off parts of the screen to highlight his performers. The way he tends to do it, at least in this movie, is to use overlapping bits of the natural environment, from the flattened viewpoint of the camera, to make squares and rectangles out of the intersections of both horizontal and vertical lines and then to keep his performers in either one place or moving between intersections... quite cleverly with regards to camera movement in some places.The sections where he does this are often quite densely layered too... absolute tangles of gazillions of areas crowded into a single frame on occasion. However, rather than go for the bright kind of colour scheme which would accentuate this in a clean manner, the colour palette looks rather dull for the most part and... well... the whole thing looked just a little grainy and dingy to me. Not what I’d expect to illustrate that kind of penchant for linear detail, for sure. I’m pretty sure it’s supposed to look like this and it’s not just a bad transfer... this is Arrow, after all and, although it’s been seen that they are certainly not above making mistakes in some of their restorations, I would have thought that this kind of dulled down look must be a part of the director’s vision, in this instance.

Another thing which seemed a little out of kilter with the visuals was the score in some places, by composer Takefumi Haketa. Not in terms of the quality of the writing on it, by any means but, for some reason, it often kind of enters and exits a scene right in the middle without warning. It seems a little bizarrely spotted and I wonder how much of that process was decided by the composer and how much was messed around with at the editing stage. As I said, it probably wasn’t too bad in and of itself but the way in which it’s used in certain places just felt a little inappropriate to me, in all fairness.

And that’s all the time I’m going to waste on Pulse. I believe it’s regarded by many as something of a j-horror classic but I found that, for the most part, it did nothing much for me. The actors seemed good but the way their characters were written didn’t have me identifying with them, or really caring, truth be told. Not something I’d recommend as a starting point for this sub-genre of film and even fans of these kinds of movies will possibly not get too much out of it, I suspect. Not something I would find myself going back to anytime soon either, it’s safe to say.
Posted by NUTS4R2 at 13:18