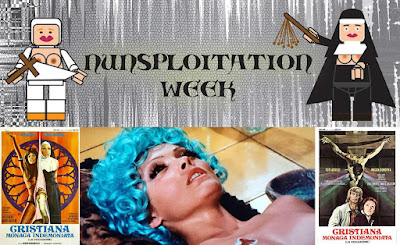 Ending With A
Wimple And A Bang

Warning: Full spoilers on the ending.

Nunsploitation is not a genre of film I know much about. I’ve seen a few over the years but I thought, with Verhoeven’s Benedetta set for imminent release in the UK and, in light of the release of Severin’s Nasty Habits Blu Ray nunsploitation box set (of which this film is the first)... not to mention a few others I’ve acquired over the years... I thought this might be a good opportunity to familiarise myself with the genre more. So it’s great that with this one, Cristiana Devil Nun, it pretty much surprised me in terms of the actual low level of nun content although, judging from the trailers of the other three films in this set, I suspect that this one is a bit of a wild card.

The film is set contemporary to when it was made and starts off setting up title character Cristiana as a bit of a hedonist who especially enjoys her sexual activities. Cristiana herself is played by Toti Achilli and, frankly, she has such beauty and appealing screen presence, I’m very surprised to find that this is the only role on her CV. She’s pretty amazing in this.

Early on in the picture, after a scene of Cristiana and her current boyfriend cavorting with a guitar player on a mountain, we find her and her main squeeze having full on sex in a packed airplane cabin as all the customers watch and place bets on the outcome (must admit, I didn’t understand quite what they were betting on but they kept counting down to something). Not everyone approves of course... a stewardess and a nun both find the act untenable. Then, tragedy quite literally strikes, as the cheaply made model aircraft they are purported to be flying in is struck by lightning and the engine catches fire (I’m sure I’ve seen this same model aircraft used as a stand in for the real thing in one of Sergio Martino’s gialli too... although I can’t remember which one). As the plane plummets to a certain death and with the disapproving nun as her witness, Cristiana preys to God that she’ll abstain from sin in the future and become a nun if only he’ll save them. And, miraculously, as soon as she does this the fire goes out and the plane somehow returns to its flight course.

So, yeah, Cristiana goes to a local convent, at the objection of her mother, to immerse herself in a monastic lifestyle and in preparation to become a nun. There, she is befriended by a lapsed nun called Sister Leonora (played by Magda Konopka, who used to turn up in a lot of things) who is obviously in love and lust with Cristiana. A budding lesbian relationship is strongly implied but never quite blatantly shown. However, Cristiana is clearly not suited to a life of celibacy and self sacrifice so, when her boyfriend on the run from the police shows up, she hides him in the bell tower and has sex with him every night. However, Sister Leonara finds out about them and so she wants in on the arrangement too. She, too, sexes the guy up in the bell tower while Cristiana is finally taking her vows with the other novice nuns in waiting... a practice which apparently includes a bunch of nuns wearing white wedding dresses in a ritual which marries them to God (Seriously? I never knew this... I’m going to have to check this out because there’s nothing to suggest that this is not a real thing in the movie). When Cristiana finds them together, about half way through the picture, she leaves the convent (so the full on nuns in a convent stuff is only about a half to two thirds of the film here and not properly returned to for any length of time) and returns to her mother.

Her mother, it turns out, is a very rich and wealthy upper class prostitute so she lets Cristiana join her jet set lifestyle as a sex worker for a criminal kingpin who also employs an artist (who seduced Cristiana in an earlier scene in the convent after painting her... ringing the bells of the bell tower with ropes tied to his legs as he sexes her up, so the other nuns don’t realise she’s not properly engaged with her bell ringing duties)... to make expensive forgeries which can be sold on the black market. Cristiana enjoys the lifestyle but still has psychedelic guilt flashback sequences and is half and half on whether she wants to keep taking the money, booze and sex or if she wants to go back to the convent. Long story short, after donning her habit again to steal a valuable crown from the a statue in the local abbey (she even thumps a priest with a candlestick to escape) she goes on the run, is briefly reunited with Sister Leonara who has come looking for her in the outside world (and whom she rejects) and then drives off in a high speed car, deliberately driving it over a cliff to her death in an act of, as she sees it, redemption.

And yeah, it’s a surprisingly moralistic tale if you think about it. Cristiana does try to return to her idea of a God throughout and, what is perhaps easily forgotten, is that there is clearly some divine intervention shown in the early airplane scene. It’s not got the stuffy, whips and chastisement tropes of some of the other nunsploitation films I’ve seen and, if anything, the attitudes of the fun loving characters gives it a feel more of some of the early giallo films being made prior to this than anything which, as Lindsay Hallam covers in her accompanying visual essay Sisters Of Vice And Virtue: The Marquis de Sade And Nunsploitation, could be seen to be closely aligned to Ken Russell’s The Devils and the slew of Decameron themed movies at the time, which cleared the path to the brief thriving of the nunsploitation genre.

The photography is great and there are a lot of scenes where, although many of the interiors are white walls, Bergonzelli and his cinematographer push vertical lines joining the big white panels to split up the composition with the frame (with occasional big blocks of colour to break things up). Something obviously echoed in the way they shoot the courtyard in the centre of the convent, to push the many vertical columns to their best effect. There are also a lot of moving Dutch angles employed in some of the later party and revelry scenes but, this was pretty much the norm for the time and isn’t as speedily done as many (although those guilt montage flashbacks in Cristiana’s head have that speed fragmented, temporal whirl more than covered).

Now, the car going off the edge of the cliff is ludicrously done. We see an obviously empty car which has been waiting for a quick push by an off screen hand once the camera has started rolling and it’s not in any way, shape or form convincing. However, when the wreck of the car is subsequently raised up from the cliff and deposited back on top by a crane, with the victim back on board, the director chooses to have the side doors open and I don’t think this is an accident that they echo the shape of a cross coming from both sides of the car. Similarly, the blood on the wound from the top of Cristiana’s head in death could be a reference to the crown of thorns that Christ was thought to have been forced to wear. So it’s definitely not a Godless film and, I think, shares it’s not so excessive exploitation elements with a strong morally upright core, so to speak.

The music provided by composers Nevil Cameron and Elvio Monti is interesting too. Whenever Cristiana is doing something sinful, I noticed one or the other of them had found ways to subtly interpolate different treatments of the Dies Irae ‘devil’s music’ into the score. A score which has, alas, never been made available on a soundtrack release. That being said, the blatant comedy music used in a couple of sequences seems totally inappropriate to the tone of the visuals so, yeah, wonder who was responsible for what in the composing team.

Now, one problem I had was that, after selecting the full length Italian cut of the film, although the transfer is tip top, they really must have had some trouble with the print. There are some scenes, for example, which go from daylight to night and back to daylight tones again in the same shot. So, I suspect they’ve done wonders with what they’ve got but, don’t expect absolute perfection.

The other big problem I had was that I was surprised to see someone telling somebody else to ‘take a chill pill’ on the subtitles. I didn’t think this was a common expression in 1972. Now I’ve researched it and, although the term chill has been around since the 14th Century (although generally not used in that context) and while there was, indeed, a recipe for a Chill Pill published in the 18th Century, I’m pretty sure it wasn’t really a ‘used utterance’ as an alternative to, say, ‘calm down’ when the film was made (certainly not in the UK, at least). So I suspect some serious errors in the modern subtitling, forgetting about the time the movie was made, are to blame here. Still, you’ve got to love Severin for releasing these into the wild so, I’m grateful for them to pour all that time and effort into it.

And that’s me done with Cristiana Devil Nun. I really enjoyed this one and would recommend it to lovers of this kind of cinema (although not necessarily those expecting various nunsploitation tropes, some of which are absent). I’m looking forward to the rest of my journey in this genre now, for sure.