Story Of A Cloistered Nun 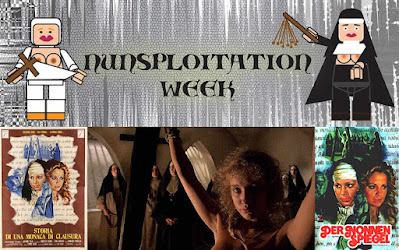 Story Of A Cloistered Nun is set in 1571 and tells the story of a young baby called Carmela (as we are first introduced to the character), who we see in a nuptial ceremony where her and the child of another family (I’m not sure if these kids are even a year old yet) are promised to each other in an arrangement designed to bind two families together. This sequence is following a fairly sedate set of opening titles where old etchings of monastic events are thrown up against Piero Piccione’s score, along with the text announcing that it’s “Adapted from authentic 17th Century Chonicles” (which makes no sense since it’s set in the 16th Century, I’m guessing) so, yeah, they were getting into marriage really early in those days, it seems. Then we find Carmela grown up and indulging what can only be classed as extraordinary tame lovemaking with her real boyfriend... honestly, not much is going on as they’ve still got their clothes on at this point but Carmela is already in raptures of ecstasy, her bosom heaving in that extra special bosomy way.

Now, Carmela obviously doesn’t want to marry the grown version of the toddler her family picked out for her so... dishonouring the family, she finds herself ‘gotten to a monastery’ to become a nun. There’s she’s subjected to lesbianism (which she completely refuses to partake in) from both her new friend Elisabeth (who has an underground group of libidinous nuns who secretly go to dress in colourful clothes, drink wine and indulge in things only hinted at in the dialogue) and also Elisabeth’s enemy, the Mother Superior. Both are in love with Carmela and both are scorned but Elisabeth gets back at her by having her boyfriend put to death, thus temporarily crushing Carmela’s will to live.

But then it turns out she’s pregnant and, when she comes to term and gives birth to a baby boy, the church hear about it and send priests and troops to investigate. In a bizarre moment, when the lead inquisitor (or whatever he’s called, this is not one of those torture porn films) questions whose child it is, Carmela owns up to proclaiming “I’m the mother!” However, in a  bizarrely Spartacus moment, Elisabeth also screams the same thing, followed quickly by the Mother Superior and then all the rest of the nuns in the convent. The powers that be have no choice but to shut down the order and expel everyone from the monastery but, before they all are split up and sent to other nunnerys, Carmela is given all the precious belongings the nuns come into the convent with so that she can flee and survive with the child, where she will wander the world helping those in need. The end of the film bitterly trumpets the fact that she’s never been beatified or canonised for her service to those in need.

The film stars a triumvirate of actresses in the key roles and whom many might remember especially in their roles in Dario Argento movies. So we have the main lady Carmela played by the beautiful Eleonora Giorgi, who would go on to play Sara in Argento’s horror film Inferno (reviewed here) and then from two of Argento’s gialli we also have Catherine Spaak as Elisabeth, who was the main female lead in Cat O’ Nine Tails (reviewed here) and Suzy Kendall as the Mother Superior, who was one of the female leads in Argento’s game changing directorial debut The Bird With The Crystal Plumage (reviewed here).

It’s another eye opener for nunnery life too. Like in Cristiana Devil Nun (reviewed here), Carmela has to wear a wedding veil to announce her wedding to God, although she renounces her vows before she actually takes them. Also, the nuns seem to all bind their breasts in a kind of half corset for some reason... hiding their femininity.

The camera work is pretty good. Carmela starts off arriving at the nunnery in very colourful clothing but... barring a window in one room, a wonderfully colourful shot of a distorted mirror and the scene where Elisabeth’s ‘secretly bad nun society’ are dressing up... most of the film is the dingy greys, whites and creams of the convent. However, the cinematography more than makes up for it and although the director is content for a while to split the screen vertically using architectural features to make areas for the actors, he does some really outrageous stuff with finding little triangular areas in front of the screen to use to segregate various characters in the spaces. For instance, in a scene where a tall monk and a shorter nun are walking side by side but in profile to the camera, he hangs a triangular frame down in front of the lens just splitting off a small area at the top of the screen. When the two characters pass behind it, the tall monk’s head is just in the triangle with both his lower body and the nun in the space below. It’s quite good stuff. And there’s a lovely introductory scene to a few of the nuns when Carmela arrives and they’re all observing her from behind what I could only call some kind of wrought iron, spiral web with a cross at the centre. The cinematography in this one is nothing if not creative, that’s for sure.

And there are a few stabs at other more exploitational tropes of the genre such as a topless whipping scene for Carmela and a scene where Elisabeth has to crawl along the ground of a big area in the convent with her tongue scraping along the ground, cleaning the floor as she goes but, I’d have to say this is all handled in a very non-sensational way and, in terms of nunsploitation, it all seems very tame compared to some other stuff I’ve seen.

All in all I would say, especially with the striking presence of Eleonora Giorgi as the main protagonist, that Story Of A Cloistered Nun is a perfectly fine and nice looking movie. I didn’t enjoy it as much as, say, Cristiana Devil Nun but then, that one seemed even less on board with the tropes of the genre than this one. I mainly had a good time with this film and, once again, am looking forward to seeing some more movies in this category very soon.