The True Story Of The Nun Of Monza 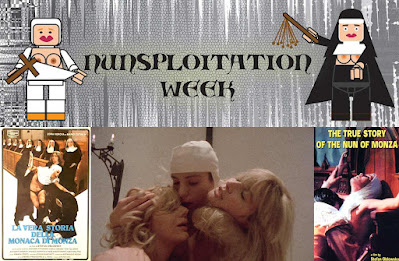 Warning: Yeah, spoilers on this.

Okay, so the four movies which make up Severin’s ‘beyond the call of duty’ Nunsploitation Blu Ray set, Nasty Habits, have generally all been slightly less watchable than the previous one as I’ve been going through the films one by one and, to be honest, this last one, The True Story Of The Nun Of Monza, is no exception and continues, to my mind, that gradual decline in quality. A decline which seems to be more prominent the later the films were made, it has to be said. Also, I knew practically nothing about the real life nun of Monza (nor the historical literary portrayal of her, which seems slightly different again) but a quick reading of Wikipedia was all it took to tell me that the writers of this genre entry were being quite a bit liberal with their title when describing their ‘version’ of events as being true.

This one starts off with the title character, Virginia (played by Zora Kerova) as she is taking her vows in that whole ‘marriage to God’ ceremony that various nuns have to go through (if I’ve learned anything from this set over the last week, as I slowly made my way through it, it’s that). However, cross cut with this scene is a sequence of two copulating horses, as the camera dwells on the giant cock and flaring nostrils of the beast in close up as it has sex with... um... well, Mrs. Horse, I guess. Now, I couldn’t quite work out why this whole sequence was being used as a metaphor to a nun wedding her spirit to God but, at least some kind of metaphor was being tried... I suppose.

So, okay... Sister Virginia is rich and she’s the daughter of the feudal lord of the area in which the convent resides. After his death, she then ‘accepts’ the other nuns as swearing fealty to her and takes over as mother superior. She gets over her earlier scene where, after dreaming of copulating versions of herself with both her future ‘lover’ and also Christ coming down from the cross, she asks Sister Benedetta to give her a good flogging for her sinful thought crimes. Sister Benedetta definitely gets a little overenthusiastic in her participation of the event but, after Virginia takes over the convent, there seems to be sexing galore going on... not the least from the corrupt, sex mad local priest and his best friend, who has his eye on Virginia to the point that said priest helps him out by creating a situation in which he can rape her. She then gets pregnant but the baby is still-born. Things soon come to a head with the political war in the monastery between Virginia and the priest played by Franco Garofalo (who spends the whole film looking like a really miserable version of Dario Argento). The inquisition is called in and everyone gets their just (or perhaps unjust desserts), including the title character who is walled up in a cell... presumably to die of starvation at some point.

All in all, the film seems to be just an excuse for throwing naked female bodies up in front of the camera and... yeah, as much as I love that idea, for some reason it didn’t do much for me in that department either. I was pretty unimpressed with the pedestrian cinematography and general mise en scène on this one too, truth be told. Maybe I need my erotica well framed and creative for it to have an effect on me, who knows. I wasn’t that impressed by all of the musical score by Gianni Marchetti either, I have to confess. The choral cues, which were pretty good were, I thought, extremely reminiscent of Ennio Morricone’s score for the giallo Who Saw Her Die? and other sections of the score were really, horrible, cheap sounding synthesiser cues (which there seemed to be a lot of in the early to mid-1980s, from what I can remember).

And I don’t have too much more to add to this one and, once again I can only apologise for the shortness of this review but, yeah, there’s nothing really interesting about this film. I mean, Images In A Convent was equally devoid of stylishly designed frames but at least that one made up for it in sheer craziness of its shifting genre elements. The True Story Of The Nun Of Monza doesn’t really even have that to fall back on. And, aside from the director's seeming obsession with capturing horse genitalia at the start of the film, it doesn’t have much that one might remark as being anything worth writing home about. And horses caught in the act of making baby horses is not something I would choose to write home about anyway, to be honest.

So that’s me with the last review of Nunsploitation Week posted but before I go, let me remind you why I got into doing a Nunsploitation Week in the first place. At some point within the next month or two, Paul Verhoeven’s latest venture into this genre, Benedetta, is being released in the UK (long after the rest of the world, alas). So I wanted to acquaint myself with some more of the legacy of the genre before going into this one. But, of course, it wasn’t just the Italians who started pumping out sexy nun movies at this time. When Benedetta comes out, my plan is to include it in a second week of genre reviews, Sister Of Nunsploitation Week and, only one of the films included in this selection will be co-financed with Italian money so, yeah, look out for that at some point over the next month or two. Thanks, as always, for taking the time to read here.