Something More Than Night 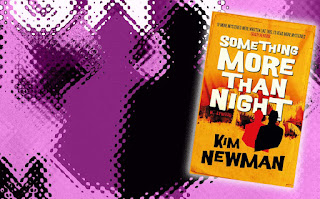 Well this one is utterly brilliant too.

Allow me a brief shout out of a review for the latest mystery thriller from Kim Newman, one of my writing heroes. Well I say that, I’ve only read four of his fictional works and a smattering of his film criticism books but, yeah, still very much a literary hero.

It was in the very early 1990s that I first knowingly came across Mr. Newman’s name, when a friend of mine (please contact me sometime if you’re somehow reading this Rob!) leant me his first edition of Anno Dracula. Well, first paperback edition at any rate... not sure if it made it into a hardback at that time. I was absolutely enthralled with the tome and the absolutely brilliant nods to other cultural characters from myriad sources in abundance, all pulled together and, in the modern parlance,’mashed up’ to weave an alternate version of literary history in which Dracula was successful in his visitation to England (contrary to the ending of Mr. Bram Stoker’s account in Dracula), set up shop with Queen Victoria and paved the way to where various vampires and humans were living together in the same society. That level of post-modernistic melange was new to me then and there weren’t that many people doing it at the time... certainly not as successfully and entertainingly as Mr. Newman and, though I could find no edition for sale in any new book store, a couple of years later I managed to pick up my own copy of the same edition in a second hand bookshop.

Nowadays, of course, the practice of taking various literary characters from different stories is much more common. For example, every year I read the ‘second from latest’ collection of a series of anthologies of new stories called Tales From The Shadowmen from Black Coat Press, which make this cross-fiction character mixing almost the criterion for inclusion (indeed, Mr. Newman has certainly contributed to some of these tomes in previous years) .

Now, remember, there was no internet in those days to find out what, if anything, was going on in the world. CEEFAX was our closest equivalent and, if you’re old enough to remember that, then you know just how useless a dispenser of information that was, back in the day. So I was absolutely thrilled when I found a hardback copy of a sequel to Anno Dracula entitled The Bloody Red Baron (and now set during World War I) which is, from memory, equally as brilliant. And a similar experience happened to me again, a few years later in one of those ‘brand new but remaindered’ style bookshops when I was on holiday in Llandudno... this time a brand new hardback of the third (and at that point final) in the series, Dracula Cha Cha Cha. Now, the books seem to be much more successful currently than they were in the 1990s and Mr. Newman has not only reissued these in expanded versions which I need to pick up and re-read... but also published a whole load more sequels over the last decade. So, yes, I keep promising myself I will get onto those at some point and, yeah, maybe this is the year.

Of course, I’ve seen Mr. Newman in person a fair few times now because he does seem to turn up to a lot of the same kinds of events I go to (not to mention appearing on a lot of DVD and Blu Ray ‘expert interviews’) although I’ve mostly only been in the same room as him rather than actually met him (unless you count that one time where I saw him on his own rushing to a FrightFest and stopped him, really only for 30 seconds or so, to tell him how much his writing meant to me).

And here I am reading his latest, Something More Than Night. The premise is as follows... the majority of the book is set in 1939 and it details the fictional adventures of one William Henry Pratt, better known to the world as Boris Karloff of course... and his friend, the equally famous writer Raymond Chandler (Karloff went to the same Grammar School in Enfield that I, myself, attended in the 1970s and early 1980s and they never once publicised it, which I always thought was a bit of a missed opportunity). The two characters in this iteration of them have had some ‘history’ together from their school days and now their detective friend is found hideously murdered. It’s up to the two of them to take up the reins of the mystery they were embroiled in, slightly earlier in their lives, joining the dots and... oh no, I’m stopping right there with the story content. It’s an incredible book and I’m certainly not going to be wrecking it for people who want to read it.

What I can, I think, say is that it’s certainly not a conventional mystery and it involves... well let’s just say it has some strong ‘weird science’ elements to the tale. Some people might also think it tiptoes from one side of the thin line which sometimes separates mystery tales from horror yarns... to the other but, yeah, that’s not an argument I want to get involved in, for sure.

The book is hugely entertaining and fans of Raymond Chandler’s works will especially love this one because the majority of the tale (apart from a few chapters of third person yarn spinning, where it was obviously necessary to switch to a third person viewpoint) is told by the voice of Chandler himself, Newman adopting the author’s writing style in as credible a manner as I’ve seen done. Well, okay, it’s been a few decades since I last read anything by Chandler but this certainly hit the mark as far as I was concerned. Mr. Newman also does wonders with his descriptions of Karloff and I really could remember certain moments from various films where the mannerisms, gestures and character traits that the writer imbues in him here are gloriously manifest.

The novel is split up into six sections, themselves split irregularly into a number of chapters, including a wonderfully titled, single chapter section called The Man In Chapter 30. And yes, there are a lot of characters from real life history mentioned but also as many made up, parody versions and stereotypes working for, for example, a fake ‘poverty row’ style Hollywoodland studio called Pyramid Pictures. And, yes, it’s full of wonderful appearances including one of the cast of Tod Browning’s Freaks and a nice reference to Margaret Brundage (I reviewed a book about her here). And, honestly, Frankenstein fans will love lines such as... “Cats love Billy. As do women. And small children he hasn’t drowned.” There’s even a nice bit of business where two of the characters get into a discussion about who would win in a fight between Flash Gordon and The Lone Ranger. And fans of Karloff would appreciate, perhaps, one of my favourite jokes in the book, when a mutual friend of Karloff and Chandler gives them the nicknames “Invisible Ray’ and ‘Visible Ray’. Yes, the book is a hoot and well worth the time of anyone who loves the movies and pulps from this particular era.

Now, there were two things that irked me just a little but, since they’re just part of the baggage that I, as a reader, brought along with me to Mr, Newman’s perfect literary venue, these mild criticisms really are my problem alone... but I’ll mention them anyway. One of them lays in Newman’s eliminating a pretty important (to me), real life character and replacing him with an entirely fictional one. Specifically, Kenneth Strickfadden, who invented all those old, sparky machines you see turning up time and time again in Universal monster movies and Flash Gordon serials (I reviewed his biography here...), has been eliminated from the fictional world portrayed here and replaced by someone else fairly important to the plot. Which is kind of a shame but these things happen.

The other thing I was bizarrely upset with, purely because I was expecting him to make an appearance and, during one sequence at the centre of the book, I thought he did... before a character was revealed as someone else.... was the fact that, not once (unless I missed a veiled reference) does Rondo Hatton turn up as a character in this one. Which is a shame but, yeah, that was just my personal wish and expectation of the book and so, boo hoo, I guess I’ll live.

All said and done, Mr. Newman has once more thrilled me with a book like no other, turned to perfection with a well researched look at the milieu of the people he’s writing about and nicely phrased to make the various characters and credibility stretching situations in which they find themselves, dance to life on the page and lodge in your brain in a way which you know will make you miss them later, when the book is done. So, yeah, Something More Than Night is yet another great work by Kim Newman and, yes, I really do have to revisit and explore the Anno Dracula series again sometime soon (not to mention some other compelling novels I’ve seen listed over the last few years which also carry his name). In other words... another great read. Go get this one.