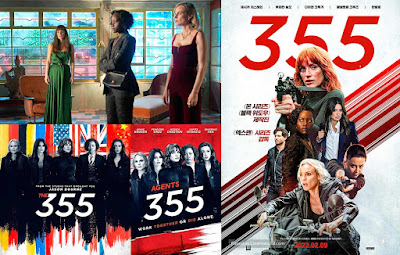 Well, they’ve been promising a female version of The Expendables, in terms of a powerhouse female action movie for some time now but never came through and so it was inevitable that something would pop up to fill that void and, this year’s attempt at that vacancy so far is The 355. Originally it was shot in a different form with some slightly changed characters as a TV pilot for a series that was never picked up (and I assume the pilot was never shown?). But now it’s a big budget movie and it’s got a stellar cast of credible looking, very smart actresses to take on the roles of the five main heroines of the movie...

There’s US secret agent lady Mace, played by the always brilliant Jessica Chastain. Her former opponent (from the early parts of the movie), German agent Marie, played by the wonderful Diane Kruger. There’s Mace’s friend in British intelligence, cyber expert Khadijah, played in a wonderfully British upper middle class way by Lupita Nyong'o. There’s ‘getting caught up in something she doesn’t belong in’ Spanish psychiatrist Graciela, played by the legendary Penélope Cruz and, finally, there’s ‘is she an enemy or is she an ally?’ agent Lin, played by Bingbing Fan.

So, five powerhouse actresses who, for the most part, seem a little wasted in likeable roles, to be honest, in a fairly entertaining... if unsurprising... film. Yeah, about that...

While I enjoyed the movie just fine, it’s very formulaic... like a lot of stuff coming out of Hollywood these days. It doesn’t matter, in a way, that the actresses are all so good in their roles because, frankly, there are two elements here which hamstring the movie quite badly.

One is the script.

One character played by Sebastian Stan, Mace’s partner, gets killed off very early in the movie. It happens off screen and a body is not shown. So, yeah, if you believe that character’s just left the movie, well... you’ve not seen many movies. Secondly, because Mace’s boss tells her that he’d died... if you go with your gut and assume the former character is not dead, you’ll know how credible an ally her boss is so, again, when he’s killed by ‘enemy presence’ Lin, it also kind of points to her really being one of the ‘good gals’ all along. So, unfortunately, it’s a film which has ‘reveals’ that unravel very quickly before they’re even declared, as each is set up like a little row of Matryoshka dolls unmasking the whole plot development before the movie has even properly started. So in terms of surprises... nothing to see here folks, move along.

The other thing that disappoints is that it feels like it’s an 18 rated movie that’s been gutted like a fish to bring it down to an age rating where kids can go and see it. Take just the fight scene elements, for example... they’re filmed in a vicious, brutal, hard hitting manner but you never really see any hard hitting gore or, for example, bullet shots to the head or body squibs etc... nor any stabbing highlighted. It’s like a 1970s Marvel comic in that respect and... I’ve got nothing against that for sure, I like that stuff... but this feels like the wrong venue to be playing those kind of ‘softening games’ considering the cold war backdrop of a group of rogue agents trying to obtain a hard drive which would mean the end of everything, if in the wrong hands, very quickly. The film is trying to be a cold war, secret agent movie but it feels like it keeps pulling its punches. My guess is, it was filmed as something with a higher rating and then cut down by the studio to reduce the likelihood of actually getting that rating. The same with the lack of nudity and intimacy in the one sex scene too... the tone felt off. Now, I may be wrong in what’s happened at final cut here but, heck, that’s what it feels like and that element of it didn’t do the film any favours, in my estimation.

But, regardless, the film does have the five lead actresses as it’s ace in the hole. All of them look like they could do what they are doing and it lends the movie an air of credibility it may have found tough achieving with some lesser artists in the roles. The cinematography and editing is also nicely done. Nothing too interesting in terms of shot design but I did like the subtle shifts in the colour palette between certain sections of the film, at it least subtle but most gorgeous when the girls turn up in Morocco and everything turns into whites with washed out yellows, browns and oranges. Nice stuff. And the editing didn’t get in the way of things really... just softened it a little due to, what I suspect, were deliberate omissions to that all important final cut. You certainly knew where you were in a fire fight though and it brings a certain clarity to the combat scenes where, again, a lot of modern Hollywood movies just bring confusion.

More confusing are such unanswered questions such as, how can Khadijah set the girls up with special spy equipment half way through the movie when they have no resources and are all on the run? Or, how can Khadijah’s boyfriend know it’s her calling him on the phone when we’ve already seen her smash up her phone so it can’t be traced earlier in the movie, so she surely wouldn’t have the same number?

So, all said and done, The 355 is an entertaining action movie and I’d recommend it to anyone who likes those things, with the caveat that the audience will see everything coming long before it actually is revealed in the story. There’s a nicely sinister and ruthless villain portrayed rather well by Jason Flemyng who is kinda wasted and thrown away at the end so, yeah, that doesn’t really help the movie either but he turns in a strong performance here, so there’s that. All in all, a nice looking film but, if you really want to see an absolutely amazing female action movie, then maybe you should steer yourself towards last year’s excellent Gunpowder Milkshake (reviewed here), which is far more innovative, surprising and much more interesting than this one. But, The 355 is an okay action movie and better than many cranked out these days, for sure.