Images In A Convent 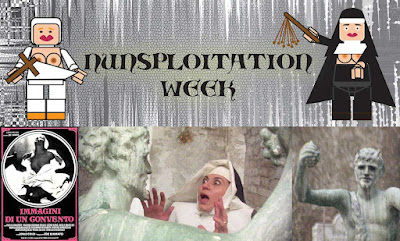 Well Images In A Convent is, so far, the dullest of the three of the four films I’ve watched in Severin’s splendid Nasty Habits nunsploitation boxed edition. It’s also, despite the tediousness of many of the sex scenes, quite an interesting film so... yeah, I think it’s definitely a bizarre contrast by what I see as, not that great execution in terms of cinematography etc but with some twists in the tone that certainly make for a wild viewing experience if... possibly not for the reasons the director was intending.

Don’t get me wrong... I love seeing young, nunned up females in a state of undress as much as the next person and this film is certainly the most sexualised of the ones I’ve seen in the set so far. But, I dunno, it didn’t make me feel much of anything while I was watching it and there’s not too much of a plot on this one either. Ultimately though, after the wonderful cinematography I saw on Cristiana Devil Nun (reviewed here) and Story Of A Cloistered Nun (reviewed here), this one seems much less interesting visually, at least in terms of the way the frames have been designed and the way the camera runs through them.. and it just didn’t feel that exciting. There was one moment when the camera is placed in the corner of two intersecting corridors and shifting the view to follow the action before shifting back to the other corridor to catch the next bit but... it’s then followed by another standard cut to more of the same and, to be honest, there’s way too much walking down corridors in this movie for my liking anyway.

The actresses playing the main nuns, especially Paola Senatore as new recruit Isabella, are all very attractive and get up to lots of pleasuring in the film... doing unto others as they do unto themselves, so to speak. Perhaps because there are so many extended sequences of nudity and sexual activity in this one, the very simple plot is not referred back to as much as it should be and so this element equally didn’t engage my interest.

However, what there is of the story (very loosely inspired by Prosper Mérimée's La Vénus d'Ille, as we are told on the credits) is quite wild and the narrative takes some lovely genre turns. The plot is simple... Isabella has been forced to come to the convent to escape the attentions of her uncle. As soon as she gets there, things get very sexualised, partially because of her presence and partially because of a demonic statue in the courtyard. Cuts back to the statue from the camera show things like windows blowing open and then nuns engaging in spontaneous sexual outpourings. The film also includes the, almost compulsory, whipping scene as one nun called Licinia, played by Marina Ambrosini, is flogged by a senior nun with a cat o’ nine tails (judging by the looks of the wounds) before the dominatrix is overcome by her own desires and starts ‘lesbianing up’ Sister Licinia herself.

However, the devil statue keeps appearing in places it shouldn’t be by ‘camera magic’... okay, they mostly just cut the film and plonk the statue there... like a Weeping Angel from Doctor Who (hmm... one wonders if Steven Moffat didn’t take some inspiration from this movie and, yes, I know the effect is achieved differently) and pretty soon a wounded traveller turns up who is brought into an outer building and who is also sexing up as many nuns as he can. Perhaps he is physically linked to the demon. Or perhaps, as I suspected, the devil character is linked to Isabella. One thing’s for sure, they never should have built that convent on top of an old Indian burial gro... err... I mean, on top of an old pagan temple, as we are told at one point in the movie. That’s a bit of a rookie mistake, I guess. At which point, after a fairly graphic rape scene... famous genre actor Donald O’Brien turns up and, well, things take another turn.

So the thing about the movie is, it starts of as nunsploitation with a strong sexual element but, somewhere along the way it turns into proper pornographic content (apparently, according to whether you’re watching the long or short cut... being as Severin are always thorough and don’t scrimp on their releases, this is the full length version)... showing erect cocks (which probably wouldn’t be allowed if it came out from a UK label) along with every other orifice and wooden dildoes etc, as the nuns sex up everything that moves and engage in all kinds of acts such as forced fellatio and sixty nining... well, okay, I guess in this case it’s sixty nunning. And then, bizarrely, O’Brien turns up and it turns out he’s there to eradicate the devil from the convent so, yeah, for the last twenty minutes or so it turns into an exorcist movie, albeit a highly sexualised one where various nuns are following him around to try and distract him from his rituals by flaunting their frenzied, masturbating bodies at him as he walks the convent to perform a ritual in every room. The ending is totally lacking any closure after Isabella stabs the ‘wounded traveller’ to death and the priest presumably finishes his exorcism. It’s all left in a bit of a cyclic state, to be honest. The traveller, by the way, has the hairiest legs I’ve ever seen... even hairier than Sean Connery’s chest... and that’s saying something.

There are a couple of bizarre things which have been unearthed by the Severin team which are of interest though. The main feature commentary track, which I’ve not listened to yet, is by the delightful Kat Ellinger but she also talks over 25 minutes of silent, rediscovered lost scenes deleted from the final cut. As she says, only in a D’Amato movie would all the cut scenes be those with character building moments... the sleaze was retained while plot and story points were deleted. Now, there’s a moment in the movie where Isabella slaps the traveller and then we cut to a reverse shot where her head is also thrown back and, coupled with the ensuing dialogue, it gives the strong impression that the traveller slapped her back full in the face too. However, on the cut, extended version of the scene, it shown that they both take a couple of good slaps at each other here.

The real eye opener is the alternate ending. I said I’d suspected Isabella all along as being a manifestation of the devil and so, when she stabs the traveller and things seem to die down for a bit, I was kind of disappointed. Well, there’s an alternate ending here where she finishes up having an intimate, topless chat with the devil statue, clearly showing the two are in league with each other. This then concludes with the statue’s grey arm actually manifesting as living stone and strangling her. I’m with Kat Ellinger on this one... this is a far better ending and I wish the producers had left it in.

But, overall, while the film passed the time... well, like I said, I found Images In A Convent to certainly be the least inspiring of the movies so far in my journey through Severin’s wonderful Nasty Habits box set (although my memory of it is kinda growing on me now... might have to revisit). One more to go in that set but, also, a few other nunsploitation movie reviews coming to the blog at some point soon (more about that in tomorrow’s review).