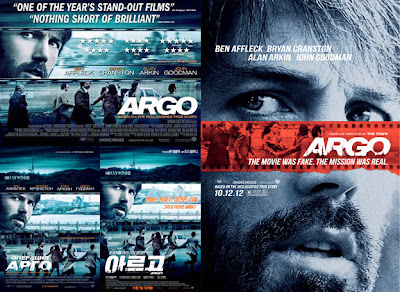 A phrase which takes on a little (just a little) extra resonance during the course of this movie, which I finally caught up with on Blu Ray... although I really had wanted to go see it at the cinema and found myself thwarted by a “too full up” life at the time. That I wanted to go see a movie involving some politics, a subject I know little about nor have any interest in, may have surprised a good deal of my friends but I’ve always been a bit of a Ben Affleck fan after his sterling work in his films with Kevin Smith, particularly the third and fourth of the Jay And Silent Bob movies, Chasing Amy and Dogma.

I also wanted to see the old Saul Bass Warner’s logo, which this movie opens with, on a big screen again... another thing in which I was stymied but that’s okay. People will keep coming back to that logo in homage for many years to come, I reckon. It also signals the kind of film Ben Affleck is trying to make... that is to say... something mired in the style of seventies Hollywood filmmaking and which stands up against such political thrillers as The Parallax View and All The President’s Men. Indeed, I’d heard that the style of the filmmaking was very close to those kinds of movies but I think that might a bit of wishful “interpretation” in this case.

Certainly, the film does more than hold up against the two films I just mentioned and many more of their ilk... Argo is a great movie and a great achievement and, perhaps, even deserved its Best Picture Oscar at the Academy Awards this year, in as much as any of them deserve it (which is pretty much never, in my book, but that’s another story). But, though it does eschew a few obvious modern film making techniques, and while Ben Affleck has certainly gone to some lengths to keep the film very close in style to a seventies movie (copying sequence structures and blowing up film so the grain is more prominent), I think the film still has quite a strong feel of the contemporary about it and I think there’s more than a little of nostalgia, as it relates to post-modernism, in the make-up of this movie than was perhaps required.

And that’s not a dig at Ben Affleck (nor the movie) as I don’t think that “looking back” symptom of nostalgic reverence is something that can easily be escaped or ignored and, I think, it’s probably a mistake to think you can do that... and possibly box office suicide too if you were 100% successful.

Having said that, the film does have long sequences where it does feel very “1970s” like and hats off to Mr. Affleck for making this all work so well. There’s an unwillingness to use hand held camera for most (if not all?) of the film but that doesn’t stop there being a lot of motion in the camera and the long smooth tracking shots which twist and turn and then are cut against other similar kinds of shots and then broken up completely by little short shots is something which works really effectively as a modus operandi here and, dare I say it, kinda brings a modern sensibility and thrill to a movie by subverting the very techniques it is intending to imitate.

What this leaves us with is a brilliantly shot (actually) motion picture which, even at it’s most Hollywood near the end when a series of freak coincidences, which I in no way believe happened that tightly in real life, are drawn out to make the suspense almost unbearable... is a very satisfying film to experience. I now look forward to seeing the extended cut of the film which is also, apparently, on the Blu Ray disc... as well as some of the fascinating documentaries included with the two versions of the movie.

Also, as would be expected for an enthusiastic individual like Affleck, he’s got some of the best actors giving amazing performances in this film, with no one really being narrowed down as actually owning the film (although Alan Arkin comes close) and with Affleck giving a very downbeat and reflective performance which allows the people around him to also come to the fore - Affleck is wise in that he really doesn’t let loose with anything showy in this one, performance wise, because I’m not sure this kind of delicately toned drama could have held itself together if he, or any of the others for that matter, had gone the more “theatrical” route (after seeing his performance as Bartleby in Dogma, I’m pretty sure this guy could have just dominated the movie if he wanted to... but he cleverly reigned it all in and showed a certain amount of taste unexpected from someone entrenched in the Hollywood community).

The film is a powerful masterwork because it takes a very real, intense situation and manages to keep the tension on it when the way it would have been filmed by many other people would have lessened and devalued what is at stake. It is, after all, a very simple story about a very simple incident. However, because of the way Affleck approaches the material, that is to say, as a true artist (or as much as one can be a true artist in the crazy and collaborative world of movie making), it means the audience never once loses sight of just what is at risk (seven lives) and is kept at the edge of their collective seat because of this approach.

The great Alexandre Desplat’s score is something I wasn’t really picking up on in the context of the movie and is something I need to hear again, but it certainly doesn’t sound out of place in this and the choice of someone who can be as subtle as Desplat is another brownie point for the production team. A very well put together package.

My only regret on my first watch is that I didn’t know the guy playing the storyboard artist for the fake film within a film was actually playing real life comic book icon, Jack Kirby... so I’ll have to look out for him again when I watch the other cut. Amongst other things.

Argo, then, is a great and powerfully entertaining movie and one of the best American films made in the last few years (although I still would have given Moonrise Kingdom - reviewed here - the Oscar for best picture last year) and certainly something any serious lover of cinema is going to want to add to their “watched” pile, if only to have some kind of opinion, good or bad, on it.

And to anybody who says anything any different, well there’s a phrase in the movie which would best sum up my response to that. I’m sure you can remember what it is.