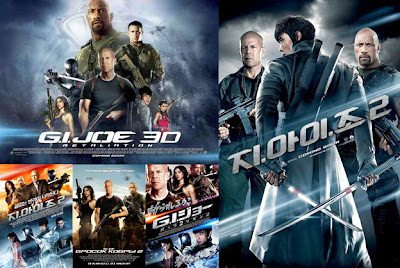 Warning: There will probably be some spoilers in here...
even for the less eagle eyed of you.

When I was a kid it was called Action Man.

And if you have been living in the UK for more than ten years, you’ll know exactly the toy action figure I’m talking about and, if you live in the USA or some other fictional reality, then you probably don’t know that brand name at all.

Basically, the toy action figure (“the doll for boys”) known as G.I Joe in the US, launched by Hasbro in that mythical country in 1964, was licensed to an English company called Palitoy in the UK, who started manufacturing the same figures for kids over here, beginning two years later in 1966. It was twelve inches tall and, depending how old you were, had various features. Curiously, one of the different Action Man figures you could buy over here was actually called G.I. Joe. He was the only Action Man figure who had a beard and he was always dressed in casual clothes in the print adverts for the figure. I used to go to a lot of big toy shops in London as a kid (I was a child model) and I never once saw the G.I. Joe variant of the figure myself, but I’m sure it must have existed. I didn’t know, as a kid, that in the US they were all GI Joes.

I was born in 1968 and from maybe a year or two later, was given my first Action Man. It was a very early model, one of the first variants. Probably not the absolute first because this was a talking Action Man... but certainly one of the first. I can’t remember if my first one actually had the fuzzy hair or not... but I remember it had a scar on its cheek and had hard moulded hands - two different kinds, left and right, to accommodate different kinds of grip for holding weapons - and not the soft flexi-grip of later additions to my personal Action Man army unit.

Nor did it have the twiddle-’em-about eagle eyes of some of my later models, either. But it could talk and depending on how far out from his back you pulled the string, he would say one of about 8 different phrases. The only one that sticks in my mind now is the phrase, and I can still hear it ringing in my two or three year old ears, “Action Man Patrol! Fall in!” It used to give me a special thrill of the clarion call of young and reckless military destruction whenever I heard that war cry and none of my later editions to the crack unit were capable of saying anything. Not sure how long those little records inside their tummys lasted but I remember it having to go to the “Dolls Hospital” in Edmonton for a very long time once to get the old boy’s speech box fixed. Happy times again when, months later, he was returned good as new.

I think my favourite Action Man was “Atomic Man” who had bionic limbs and had a hand that could turn into a helicopter rotor... but that was a good many years on from my first model and that’s probably as much of my own personal nostalgia for the range that you’d care to hear about I reckon (although, for the record, Bullet Man was the worst piece of cr*p, disappointing action figure you could market to an enthusiastic bunch of children... you didn’t want to move his arms in case they would just snap off under the strain of the badly made joints).

So anyway, a few years ago my friend Orange Monkey and I went to see the first GI Joe movie and, frankly, it was so awful that... well... we had such a good time with it. They were going on about “weaponising” this, that and the other and had completely stupid, over the top gadgets and a script so bad that you just had to love it. And we did.

So I was pretty stoked to see a sequel.

However, while this new one is much more of a reboot than a sequel, it’s certainly not wanting to ride the coat-tails of the last movie and it’s almost like it wants to purge itself of the previous movie... which probably looks to Hasbro like a bad error, and do it’s own thing. That it succeeds fairly well is quite surprising.

In Universal’s third mummy movie from 1942, The Mummy’s Tomb, some of the main characters from the previous move were retained (and aged 30 years) and then systematically killed off over the course of the first quarter of an hour or so. This was a pretty bold move if you ask me and served two purposes... one is it gave fresh heroes and two is it gave a certain gravitas to the main monster. With G.I Joe 3D: Retaliation, a similar tactic is employed with the lead GI Joe from the last movie, as played again by Channing Tatum, being used to give weight to the villainous threat of Cobra as he is retained only to be killed off a short time into the movie (as the trailers suggested). That he is in the film as much as he is, is testament to his new found, post-Joe success with audiences and a bunch of reshoots which contributed to the year’s delay between the original scheduled release date and now, the actual final release window of the picture.

The main tone of this piece is at odds with the first and, while it’s still quite over the top and silly (obviously) it does seem to be taking itself much more seriously than it’s predecessor and, because of that, it’s very hard to compare this movie to the first one... so I’m not gonna try. It’s basically one action set piece after another hung on the bare frame of a plot line. A plot line which itself is kinda incongruous as it needs to fill in the blanks at the start to set up things about various characters which were not set up in the last movie... it feels like we missed a movie out in between somewhere and that’s not such a good thing.

The film is not totally humourless, of course. How can it be when you have a couple of guest spots from Bruce Willis as the original “Joe” cracking one liners and The Rock doing pretty much the same in the comedy stakes... but it’s just not as ridiculously campy as the first and the action sequences are, for the most part, pretty solid and edited well enough that you can at least see what is going on. Some of those sequences are pretty kick ass, actually, so congratulations to the director for keeping the geography of the choreography, so to speak, all in his head without fluffing it up later in the editing room like so many movies these days do. Good stuff.

The score by Henry Jackman is also pretty cool. Much better, in my view, than Silvestri’s score to the first movie and very much in keeping with some of the good work he did in X-Men: First Class, although most of it is mixed down way too low in the movie and buried beneath the various gunshots and explosions for me to make a proper judgement call on it just yet. It works pretty well in the context of supporting the film, though, so that’s probably the main part of the job done right. I’ll be picking up the CD for sure, later in the month.

And that’s all I got to say, right now, about this one. GI Joe 3D: Retaliation is a big, dumb action movie which is, at least, a big, dumb and competently presented action movie... so if you like that kinda thing then you probably won’t be disappointed with his one. Let the bullets fly. “Action Man Patrol.. fall in!”
Posted by NUTS4R2 at 21:52