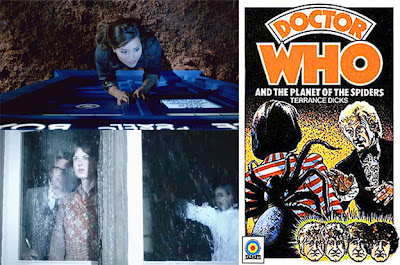 Warning: This review will be haunted by quite big spoilers.

Now that’s more like it. Proper classic BBC ghost story time and, very much classic Who. And we even had a return visit from an old friend... sort of.

Okay, so this is the kind of thing that British TV used to do so well in the 1970s... with various M. R. James adaptations and shows like The Stone Tape (which I still haven't seen) and The Omega Factor. In fact, this weeks story could almost have been a classic episode of that great TV sci-fi scarefest of the late seventies, Sapphire And Steel... except with Matt Smith and Jenna Louise-Coleman replacing David McCallum and Joanna Lumley.

Now, as usual for a lot of these kinds of things... the writers will spend the first third or more of the show building up the sheer supernatural scariness of the seeming plight of whoever the main protagonists happen to be, before tearing it all down and sewing it up as either a) some kind of time window thingy or b) some kind of alien creature thingy. As it happens, though, while I was expecting it to be very much of the first possible solution to this weeks ghost problem... and I was trying to work out which of this week’s two leading ladies was actually going to turn out to be the ghost that was haunting them all due to the intervention of The Doctor and Clara... it turned out that the writer had cross-pollinated a bit of both of my expected two possible outcomes and gone for a not quite as thrilling but certainly interesting blend of the two.

On hand to please the drooling fans and to give the young psychic lady, Emma Grayling, a helping boost to open up a tiny wormhole in time was the old friend I mentioned earlier... the old friend being a blue crystal from Metebelis 3. Long in the tooth fans of the show... and by that I mean very ancient people like myself... will possibly remember the planet first showing up in the Jon Pertwee era story The Green Death, with Jo Grant keeping a blue crystal from the planet where The Doctor picked it up. She takes it with her at the end of the story, when she leaves the show, but sends it back to The Doctor in time for it to be an important plot device in the last proper Jon Pertwee story, Planet Of The Spiders (featuring the titular Spiders of Metebelis). So it’s good to see the famed blue crystal again and one wonders if, being this is the fiftieth year of the show’s broadcast, it might pop up again a little later in the year, since it’s such a famous prop for the show.

The atmosphere in Hide was evoked very well with all manner of spooky shivers on hand with the only real fumble being, in my opinion, a quite overt reference to the classic 1963 Robert Wise film The Haunting... which is my all time favourite horror movie and which is based on an equally chilling novel by Shirley Jackson called The Haunting of Hill House (check it out if you’ve not read/seen it but leave the 1999 remake alone while you’re about it). The famous hand holding scene lifted quite ineffectually from this, I have to say, is something I’ve mentioned before, I’m sure, in relation to the executive producer of this show, Steven Moffat. His writing style of “the scary thing is already happening or has happened and you didn’t notice it” kind of spooky element is very much something he tries, and often succeeds, to emulate and although he didn’t actually write tonight’s episode... one has to wonder if he didn’t ask for that specific lift from The Haunting to be put in there.

Apart from that wrong step, which frankly would have been a lot better with a lot less lighting and a lot more ghost/time travel logic behind it in terms of direct aftermath, the rest of the episode is all a big thumbs up from me in terms of top notch writing, blistering acting performances (I want to see these two new characters again) and some nice editing and shot composition... not that I have particularly big thumbs, mind you. There was a particularly nice lighting effect (or more likely computer manipulated desaturation and recolouring effect) whenever The Doctor was in the “pocket universe” for example, which really was easy on the eye. Was very impressed by it, I must say. There was even a kind of time-travelling variant of the photographs that David Warner and Gregory Peck were having so much trouble with in The Omen, but that worked so well that it was only when I was sitting back and writing this review just now that I realised the connection. Good stuff.

And Murray Gold’s score, although I think it had a lot of old stuff tracked in, also had some nice strong statements and variants of the Eleventh Doctor sub-theme rattling around at key moments and I must confess my foot was definitely tapping through a lot of the episode. Still looking forward to some nice CD score releases from this season from Silva Screen at some point later on in the year.

There was also some nice moments with the TARDIS and Clara’s relationship going on as “the old girl” learns to start trusting Clara a little, not that I’d give that much stock, to be honest. I still think Clara could either be the next incarnation of The Doctor (if Tennant doesn’t ‘re-land that role’) or quite possibly the new nemesis of The Doctor... or an old one... The Rani, The Master... when is that timelord pocket watch going to come out?

And I don’t think there’s much else to say about this one, to be honest. If I wasn’t quite as satisfied by the show’s denouement as I’d hoped I’d be, I was still certainly taken a little unawares by it (just a little though) and it was still interesting enough to hold my attention. And when the end logic of both mini solutions of this weeks ghostly apparition were both revealed to be all about love, then that’s always enough to get my heart behind a show. Love rules! I like it.

Okay, so all good stuff. Next week’s episode looks like it could go either way with an exciting journey to the centre of the TARDIS.. let’s wait and see how that one turns out, shall we?