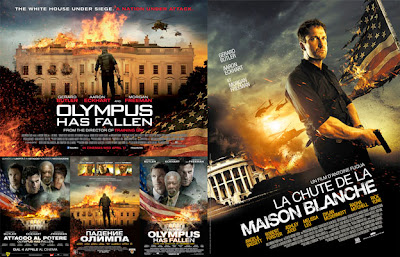 Warning: Very slight spoilers lurking stealthily to jump out and stab you up!

In his new film Die Hard, Bruce Willis plays an action hero who is trapped in a building with a group of terrorists... woah.

Wait, wait. Okay... sorry folks. For a minute there I got my movies mixed up. Let me start this review again.

In his new film Olympus Has Fallen, Gerard Butler plays an action hero who is trapped in a building with a group of terrorists.

For anybody still in any doubt... yes, Olympus Has Fallen bears a similar structure and stimulates the exact same thrills that the original Die Hard movie did. The simplistic plots to both are uncannily alike and when I tweeted less than an hour before going to see this new one that I was just going off to see Die Hard 6: Today Is A Good Day For Olympus To Fall, I really wasn’t expecting the similarities to be so blatant and while I think the original Die Hard has a lot of edge over Olympus Has Fallen, in both its witty visual and musical language and, also, its good humour, the slightly more straightforward Olympus Has Fallen is also quite entertaining and is actually quite competently made.

That being said, the film doesn’t quite satisfy enough at the end.

Similarly, a film I liked years ago by the same director, The Replacement Killers, also suffers from the same lack of over the top panache in the “end game” stakes but then again, that might not be what the director was aiming for with this one. And while it’s far from a perfect action movie, it’s certainly very well crafted... not particularly in composition terms but certainly in the editing. It’s not the jumpy MTV generation style of visual jiggery pokery you might be expecting from an action fest of this magnitude and there are some nice, fluid and longer shots amidst the “dazed and confused” style of editing going on in some of the more insanely loud sequences in the movie. And at least the shots all seem to match up to each other.

What I’m trying to say here, I guess, is that the action sequences, of which there are many, won’t leave you confused and wondering about what’s just happened... it’s all very well put together and easy to understand. They’ve started getting a little better at this kind of stuff again just lately in Hollywood it seems, as opposed to five or so years ago when you couldn’t follow hardly anything in these types of action jamborees.

Olympus Has Fallen is a phrase used for when The White House has been “taken” and it’s certainly been taken in no uncertain terms in this movie (a group of terrorists with a particular set of skills, no doubt). Aaron Eckhart, an actor I rate quite highly in modern Hollywood, does an excellent job of playing a president who is taken hostage with his staff in his own bunker in The White House and Gerard Butler, who is not such a slouch himself, plays the action hero with a tragic link to the president’s recent past life and is the “man of the match” and “on the scene” when it comes down to being the only “weapon” that stands between the nuclear destruction of the USA and North Korean terrorists. Although one of the ways he does this, and there seems to be an abundance of this kind of action in this particular movie, is to run around stabbing terrorists in the head.

I’m not kidding. That seems to be almost a mini theme of this movie. Stabbing people in the head. I’m not sure you can even do that all that efficiently, can you? I understand a high speed bullet will go through a person’s skull but surely a blade weapon which isn’t launched at “deadly miles per hour” is just going to glance of the skull of a person, isn’t it?

Apparently not, it would seem, and the person who knows this the best is Gerard Butler... who will basically stab anything in the head that moves in this film. Now, yes, I know he’s got to be all stealthy and not fire off any shots lest the terrorists know he’s there and “shhhh... be wery, wery quiet, I’m hunting rabbit”... and all that but, seriously, there’s more head penetration action in this flick than Deep Throat. What can it all mean? A disturbing trend setter perhaps.

Anyway, Gerard is obviously the man for the job and we watch as he runs about the floors of The White House, getting a couple of people to safety and figuring out how to get into the bunker before atomic death reaches Washington in fairly more realistic way than Martian death rays or giant reptiles. He’s ably supported by a brilliant cast, too, including the aforementioned Eckhart, Morgan Freeman, Angela Bassett, Robert Forster and the much wasted Rhada MIichell as “the wife of the action hero”, who is there to provide the odd poignant moment while Mr. Butler’s character takes a shot (in the head) at redemption to make up for the time six months prior to these events when he fumbled saving the life of the President’s wife.

And that’s what this movie is about. Redemption!

Well, okay, redemption and, you know, stabbing people in the head really a lot. It’s about that too.

I have to say that the character set ups in this one, dead Presidential wife, teaching the President’s son all the nooks and crannys of The White House etc are really kinda obvious, but at least what’s on the written page is executed extremely well and this extends to Trevor Morris’ excellent score which is appropriately flag waving and percussive and matches the on-screen fireworks pretty well... although it does get buried under the sound effects quite a lot, I'm afraid. I’d like to hear this as a stand alone score away from the film but, sadly, so far it’s only available as a download and not on a proper CD... so I probably won’t get the opportunity. Still, if we’re lucky, somebody might release it at some point.

And that’s really all I’ve got to say about Olympus Has Fallen. If you like the Die Hard kinds of action movies and you want to see one that succeeds in all the areas a movie like that needs to succeed in and which presses all the right buttons, then this movie is it and you won’t regret giving it some of your time. That being said, it’s not something I’d probably look at again as opposed to the Bruce Willis films, which I probably will give a spin every ten years or so. But, again, having said that... I’d be fine with queuing up for a sequel and seeing how that goes. If explosions and bloody mayhem and err... head stabbing... are your thing, held up by some solid acting from all the principle cast (and the various people being stabbed in the head), then you should probably get down to your cinema to see this one while you can.
Posted by NUTS4R2 at 20:37