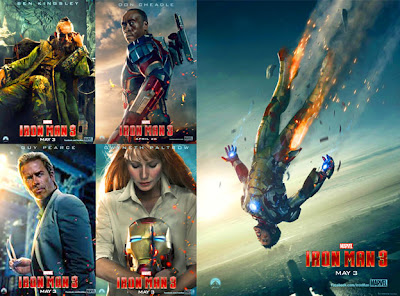 Through A Glass Starkly

Warning: Tiny, slight but sharp, splinters of
spoilers working towards the heart of this review.

Please Note: The posters advertising this movie refer to the title as Iron Man 3 whereas, on the actual print of the film I saw playing at UK cinemas last week, it was definitely Iron Man Three... which is how I will refer to it in this review.

You know, I really have always liked screenwriter Shane Black’s work a heck of a lot. Specifically, I loved his writing on the first Lethal Weapon movie, The Last Boy Scout and The Long Kiss Goodnight. When he got his directing gig on another gem he’d written (adapted from an old Mike Shayne adventure) called Kiss Kiss Bang Bang, I was blown away all over again. I think this guy is a true artist when it comes to popular culture and I look forward to him getting his Doc Savage movie off the ground (as long as it’s set sometime in the thirties that is). Which is why I kinda regret some of the things that I feel I need to write here to give Iron Man Three a fair shake of the stick.

I also really loved the first Iron Man movie. I think it’s certainly one of the best two or three super-hero movies ever made and it delivers some serious and sometimes morally challenging ideas with the grace, delivery and style of a 1930s screwball comedy, especially in the scenes of dialogue between Tony Stark (played by Robert Downey Jr) and Pepper Potts (played by Gwyneth Paltrow). I couldn’t say enough good things about that first movie when it was initially released and that’s not really changed in terms of the first one now. The second movie though... well the Stark/Potts relationship took a backseat for the most part and ultimately, I felt kind of let down by it and, though it pains me to say it, I feel the same about Iron Man Three in some regards.

Now please don’t get me wrong here... I thought Iron Man Three, the fifth film to feature Robert Downey Jr as Iron Man (so it’s really Iron Man 5 if you’re counting people!) had some fantastic stuff in it and some of Shane’s writing in the smaller, dialogue filled sequences is absolutely brilliant. In fact, on paper, there’s really not much not to like. The main title character is changed by the events of this movie, which may well have some sort of impact in future films and some new concepts are introduced such as not having to be in the Iron Man suit to be able to pilot it, for one, and then the next logical jump from that being that you can command a whole army of empty suits into your personal crack unit... that was a nice idea (although how they top this kind of thing in future movies I don’t know).

It’s absolutely filled to the brim with some nice moments such as Happy (played again by the director of Iron Man and Iron Man 2, Jon Favreau) being addicted to the TV show Downton Abbey and the brilliant portrayal of The Mandarin by Ben Kingsley which, if you know as little about the screen incarnation of this character as I did, will be quite a pleasant surprise to you when Tony Stark’s character gets to met him in the flesh. The movie also deals with concepts such as a lead character who inadvertently makes his own demons (which I think is a road we’ve kind of been down on before with Iron Man but it seems to work pretty well here) and also dealing with the psychological consequences of the heroic “save and fall” that Tony Stark pulled off in the fourth Iron Man film, The Avengers (aka Avengers Assemble). This is all good stuff and there’s enough good writing on show to tie everything from Tony Stark’s past screen exploits together in a neat and appropriate package, which is just what Shane Black does.

I think the main problems, for me, were the deadly dull bits between the strong dialogue sequences and the sometimes not so kick ass action sequences... and also the ongoing issue that you need to keep having foes who are able to take on Iron Man and try to get them as credible as you can within the silver screen edition of the Marvel Universe that nobody questions it. It was always done fairly “real world” by using people with technically brilliant weapons or weaponised armour in the first two movies, but here Shane Black takes a more organic, “more human than human” approach with ex Neighbours TV soap star Guy Pearce playing a scientist who has invented a drug to give people the ability to grow limbs back (The Lizard in The Amazing Spider-Man really needs to work with this guy, I think) and also to turn them into either super-powered villains or, in some cases, powerful bombs. I guess this could have been handled credibly in a kind of “4-colour-Cronenberg” kind of way but, alas, the flashy, orange CGI work and over the top nature of the super-powered beings in this did seem to scratch a little at the credible surface of even a movie that has characters such as Iron Man running around in them. I guess, since The Avengers, all bets are off when it comes to credibility of the antagonists but I would have preferred him to face a more realistic set of villains in this one. I guess I can see why they felt they needed to do this, though.

The editing was something I lament on this movie, especially in a long battle towards the end of the story (which is where most of the action is located anyway... towards the end of the film). I did have trouble following the speed of the cuts and found placing the shots which flashed before my eyes in this sequence into some kind of coherent order fairly challenging, to be fair. As a result, the final fight in the movie didn’t really hit any emotional high points for me (which are often best done in isolation anyway) and I did find some of the footage kinda incomprehensible as I tried to follow along. And despite that, I still feel the movie needed about 20 - 30 minutes of judicious pruning in certain areas when it comes down to it. A shorter, tighter film may have worked better.

Another weakness of these particular Marvel branded movies is, of course, the consistency of the musical scores...

Marvel have done a heck of a lot of things right in the last five years or so when it comes to the specific subset of the Marvel Universe films they are bringing out as opposed to films series like Spider-Man and X-Men from other studios. They’ve gone for mostly great scripts, well thought out choices of director (Kenneth Branagh for Thor for instance, was one of a few strokes of genius) and they are inhabiting all these movies with a strong set of well established, “serious” actors who lend a certain amount of weight to their roles and who are not, as often happens, ignoring the ensemble nature of the way the characters all need to work together. This is all good stuff, of course.

Why then, are they completely compromising all that by not giving each subset of heroes who make up The Avengers their own, string of signature scores? Take this particular sequence of Iron Man films, for instance. We’ve had three stand alone Iron Man movies (not including The Incredible Hulk and The Avengers within this example, because it just makes the water muddier when it comes to music) and three separate composers scoring each one with completely different leitmotifs for the characters. Seriously, people, we had Ramin Djawadi, John Debney on the second and now Brian Tyler on the third... all of them are excellent composers and all of them have done brilliant and appropriate scores for these films... but none of them match up with each other. Why?

The only stab Marvel made at musical continuity was getting Captain America: The First Avenger composer Alan Silvestri back for The Avengers, but this didn’t do much justice for the Hulk, Thor and Iron Man characters in terms of melodic value and binding the characters together with an integration of those specific melodies. So Iron Man Three does, unfortunately, continue the trend of completely ignoring the musical continuity of the character in every way except style (there’s usually a lot of percussion in the Iron Man movies, for sure).

Having moaned about all that, though, and my general dissatisfaction with certain elements of the film... there are still a lot of really great scenes throughout the running time which are more than worth paying the price of admission for. I’ve already mentioned Ben Kingsley’s scene stealing performance as... well, anyway, his few but amazing scenes. In addition to this you have the Tony/Pepper scenes still fairly sharp and witty in the dialogue and you also have a teenage character for some of the movie who really reminds us that, although it’s never really in great shape, Tony Stark does have a heart and is a real human being who is trying to do the right thing. And I still love the character’s arrogance and the way that his self awareness of his personality informs the audience that you can’t take this guy at what’s showing on the surface... a real testament to Rob Downey Jr’s continued excellence at playing this, and many other, characters.

So I’m done with this one. It’s not the best but even so, it’s a heck of a ride and although you might find yourself dissatisfied with certain sequences, there’s a hell of a lot of good stuff on show and the director, production team and studio should feel proud that they’ve been able to deliver an above average super-hero movie again. It’s not that easy to do.

One last thing... this film continues the trend of the movies having an additional scene after the last drop of the end credits play out... and it’s pretty cool and I was pleased to see one of my favourite living actors sharing some screen time with Robert Downey Jr again. Let’s just say that, if you were a fan of the last movie starring this character... you will want to stay seated for this last, little sequence.