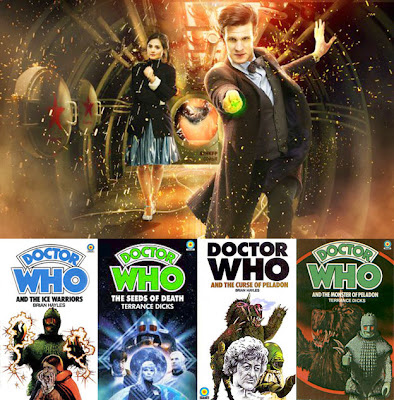 When I was a kid, there were three big monsters in Doctor Who and the rankings were mostly based on their recognition to the widest majority of people as harbingers of creepy menace and possible death in the show... and they went like this...

The number one enemies, of course, were The Daleks... who had been with the show since the second story of the very first series. The second most recognisable characters were, of course, the half-man, half-machine Cybermen, who had passed time with the show since the very last Hartnell story and who had turned up a lot in the Troughton years (curiously, Jon Pertwee’s Doctor only ever encountered the cybermen once, as a bit of a throwaway sequence in the anniversary story The Five Doctors... but the target novelisations were big in the 70s and kids really did know who the cybermen were... in no uncertain terms).

The third most recognisable “enemies” from the show, just a little ahead of The Master, the Sontarans and th Ogrons, were The Ice Warriors, who started out life appearing opposite Troughton’s Doctor a number of times and then continued into the Pertwee era with the two serialised Peladon stories, The Curse Of Peladon and The Monster Of Peladon. That last story dates from 1974 and, actually, that’s the last time we’ve properly seen them since then in anything other than a quick, flashback reference... almost 40 years ago (although the Tennant era story The Waters Of Mars does have some slight references to them both in dialogue and the partial look of the antagonists in that story, to be fair).

And then, last year (seemingly a fair few months before the story was showing up in the news... I don’t know how that happened), a friend of mine told me that they were bringing them back for the 2013 series of Doctor Who.

To be honest, I was kinda split in how I felt about that.

One of the things I’ve really not liked about the Matt Smith era of Doctor Who is that a couple of the redesigned alien creatures (or let’s call them monsters, shall we) have been absolutely terrible compared to their original incarnations. The Silurians, for example, though much more facially expressive than their Pertwee and Davison era incarnations, are pretty rubbish designs in comparison. And even the Daleks got kind of knobbled and turned into something much less scary and unwieldy in Matt Smith’s first season... so I really haven’t trusted the people behind the most recent production team on the show to really come up with a decent redesign. That finally changed, however, when I saw a photo of the new design a few months ago and thought it looked... well, pretty good actually. Looking much less like something they’ve wanted to downright change and back into the realms, again, of something they just want to tweak and improve a little for modern audiences of the show (the new Zygon design for the 50th anniversary story of the show to be broadcast in November also looks pretty good too, I have to say). Although the lack of hair at various joints bothers me just a little.

And now the episode is finally upon us, written by Mark Gatiss who I find a bit hit and miss on these things... and it was actually a pretty good episode.

Set entirely on a Russian nuclear submarine in the early 80s, the episode deals with a thawed out Ice Warrior (yeah, okay, they started off back in Troughton's time as a reference to The Thing From Another World and Gatiss uses that here as a nice little reference), a once great hero of his people who has been stranded in the ice for 5000 years and who wants, after he has been attacked by a jittery human, to wipe out the planet... lucky he just happens to be on a nuclear sub then.

The episode is nicely claustrophobic with The Doctor and Clara just happening to land on the submarine just as the “monster of the week” wakes up. The tension between these two new additions to the crew and the Russians is all quickly forgotten as The Doctor takes charge of the situation, with allowances for a few mistakes by the Russians along the way.

There were some good things about this week's story such as some overly enthusiastic red and green lighting in certain scenes, which looked like the BBC had hired Mario Bava and Dario Argento to work on the episode and, this weeks installment did indeed have a couple of big time movie actors amongst the crew of Russians... namely David Warner and Liam Cunningham. The real eye opener, though, was the neat trick of revealing that the Ice Warriors as we usually see them are actually clothed in armour (something which could be seen as something of a contradiction in some ways since, in the old days, they did occasionally wear helmets over what we are now told is their armour) and then having the armour open up and “something” getting out and running amok. We only ever see its hands and, for a little while, it’s head... but this is more than enough to keep things scary and I’m sure Gatiss and co are not exactly unaware of how much like George Pal’s martians from his 50s movie version of H. G. Well’s War Of The Worlds this level of the "reveal" is and how it will affect the audience. Very creepy and appropriate for an episode of Doctor Who, I must say.

There were, however, a couple of clunkers in the episode too... as far as I could make out.

Number one is... why have the captain ban The Doctor from going to talk to the Ice Warrior and instead have his new companion do it with The Doctor talking through a headset? Yeah, okay, I know... for dramatic reasons. But, honestly... it made no sense.

Second gripe is... the TARDIS disappears to get itself out of trouble almost immediately at the start of the episode, stranding The Doctor and Clara in the submarine with the Russians and their new martian acquaintance. However, it relocated to the opposite pole of the planet so... how the bleepity bleep bleep was it still able to translate The Doctor and Clara into perfect Russian for the crew and vice versa? We’ve certainly not been told that the translation circuits (or whatever they're called) have got anything like that kind of range before. I’d just assumed when it disappeared at the start that it was lurking somewhere close... so that was either a bit of an oversight or carelessly insulting the intelligence of the audience as far as I’m concerned. That element of the plot seemed a little lazy to me, truth be told.

But, honestly, I’m kinda just nit picking here. It was a pretty great episode of Doctor Who (which is not bad considering how “Series 7” has been playing so far both last year and this year), so I’m thrilled we got another good one out of it and, also, very clear evidence that the Ice Warrior is not alone and that his race are all still alive and kicking. So I’m sure they’ll be back in their droves either in the last episode of this series or perhaps as one of many sets of aliens (possibly) in the 50th anniversary story when it airs. Time will tell.

In the meantime, next weeks episode looks nice and “old school” spooky so I’m looking forward to that one now, too.  But as far as greeting an old foe back goes... it was “Ice to see you”.