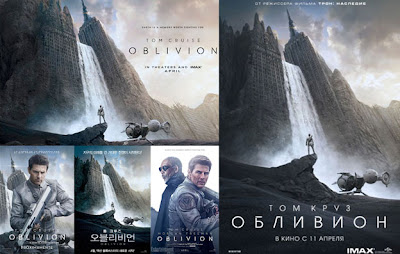 I’ve said it before about a gazillion times on this blog and I’ll say it again now because it’s still just as relevant to this movie as it is to loads of other big-budget Hollywood blockbusters over the last 10 years or more. It’s like the people behind the production and release of these films have discovered a stash of old 1950s/1960s short story collections by the likes of Philip K. DIck and Robert A. Heinlein and are intent on regurgitating every single one of them as large scale productions for a mass, modern audience.

I guess this works for you if you’ve never had any exposure to the golden age of science fiction and the conceptual goldmines found therein, but what it means if you’re even just a little older than a teen is that it’s unlikely any of the premises being touted in these movies will come as a surprise to you or take you unawares. Of course, there’s something to be said for doing these kinds of stories on screen right now... the use of various forms of special effects make them a hell of a lot easier to render credibly on the collective imagination than they would have been 30 or so years ago. But that’ s about it and, honestly, that’s exactly what you get here.

Oblivion is a well made film which is absolutely beautifully designed but it has one big major flaw which the publicity machine for the film is as much responsible for as the final product itself. The trouble with the brilliantly cut and intriguing series of trailers we got for his movie is that they set up the expectation of some kind of heavy twist... so you know there’s going to be one before you go in. We have the enigma of the woman in the dreams/memories of one of the last two guardians of the earth turning up in a pod which lands on our ruined, post alien apocalypse planet from out of the past. There’s a mystery to be solved and, to be fair, the trailer does its job well.

However, the film just doesn’t have quite enough going for it to pull off a totally unexpected endgame and take the audience unawares. Most people will have, from fairly early on I believe, more than just an inkling about what is really going on and I know damn well that the full visual confirmation and impact of “what is really happening” on Tom Cruises’ main protagonist Jack Harper was no surprise to most people I know who saw the movie on opening night (although I’m not going to tell you what that particular reality is here) and most people have figured that stuff out just by the implication of the character’s main set-up for the audience, especially regarding the “company line” on the memories of their people. However, even if it did still remain a mystery until the trick revelation when Tom Cruise, in one of a few little homages to the Planet Of The Apes series of movies, penetrates the “radiated zone”, the way the camera work chooses to continue to shadow certain details of some of the shots is a dead giveaway. But like I said, I won’t spoil it here.

With that particular story weakness aside, the film is quite triumphant in everything else it tries to do... although a little judicious pruning of the running time by 20 mins or so may have been advisable, I think.

The design of the world our two main protagonists and antagonists live in is very cleanly realised and the sleek curves of the little flyer Jack pilots in his job to maintain the, quite lethal, flying drones is just one of many visual (and indeed aural) pleasures on show in the film. And when I mention those drones as lethal, I mean exactly that. They are set up quite quickly in the story as something to develop later on during the course of the film and you see just how deadly they are, dealing out swift annihilation to anything which isn’t supposed to be present on the planet. This helps somewhat later in the narrative when, inevitably, as you know they will, Jack and several other characters have to try to deal with these things... you certainly realise how real a threat they are.

That’s another thing the movie does well, actually. Racks up the tension.

There’s a fraught and quite intense suspense sequence fairly early on in the movie when Cruise explores a sink hole to fix a second, downed drone and instead finds himself in a trap. This will, most likely, have a certain percentage of cinema goers balancing precariously on the edge of their coca cola stained seats and the denouement of the sequence is quite a relief when it comes. And it’s this same sequence, too, which also helps set up the “danger-Will-Robinson-danger” aspect of the drones which serves it so well in the last third of the picture. Although, having remembered that sequence now, there’s another flaw in this picture in that the way that Cruise is rescued here from his potentially deadly fate, as a quick reveal at the moment before certain death, is used at least twice more in the movie to get various people out of a hole. No worries, they work fine, but it would have been nice to find a less repetitive solution to those kinds of sequences.

However, the special effects (for once) are really amazing and serve the environment of the story in a much more supportive and believable manner than they have done in many science fiction movies and the acting by Cruise, Morgan Freeman, Olga Kurylenko, Andrea Riseborough and even Nikolaj Coster-Waldau (who I last saw in the Swedish thriller Headhunters - reviewed here) is all beyond exemplary and the way in which these people inhabit their environments gives the credibility to the story telling that all good science fiction needs.

And Oblivion is good science fiction.

Obvious, it’s true, but if you can get over the inherent weaknesses of the storyline it’s definitely got that "classics of science fiction" vibe to it... which given my opening statements, kind of figures. The story may work better as the graphic novel it was originally intended to be (the publication of which was delayed until this film adaptation of it was released) but I’m not sure I could now divorce that experience sufficiently from the film to be able to appreciate it on its own terms, I suspect.

It’s also got a score which supports the movie well and should be good as a future listen on the CD release, blending orchestral style scoring (possibly done on synthesisers, I couldn’t tell from the mix in the movie) with electronic back beat sweeteners during certain of the action scenes. Coupled with an array of sounds which almost make up a leitmotif on their own, such as the beeps of the drones, it makes an awesome assault on your eardrums and really helps you get into the film and behind the emotions of the characters very quickly.

And the characters are quite interesting characters (even the deliberate cyphers) it has to be said. Another plus point for the film.

Oblivion, then, is not a bad movie. Not a great one, to be sure, but certainly enough to keep most lovers of the science fiction genre satisfied until the next big thing comes around. It’s certainly not as entertaining as many of the films with which it seems to share the same aesthetic palette - Minority Report, I Robot or the Burton remake of Planet Of The Apes - to be sure... but it does have its own thing going for it and it shouldn’t annoy too many people with the obvious nature of the main storyline... even if it does beg, borrow and steal from a lot of the classics. Definitely worth checking out if science fiction is your thing.