Doctor Who - The Rings of Akhaten 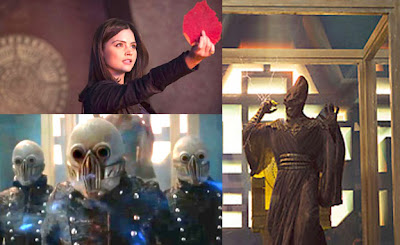 Ring Out Your Dead

Warning: Very slight spoilers on this one, I suppose.
If you really aren’t expecting them.


Well... I think this is going to be a very short review.

The Rings of Akhaten was, frankly, very dull.

Well okay, not that short a review then. Let me try to add to that.

I watched this one with my family and the general concensus in the room for this one was, I’m afraid, that it was kinda dreadful. I’d have to go on record as saying, it wasn’t dreadful by a long chalk... it just wasn’t very good.

Okay, so there are some very nice things going on this episode which include new companion Clara’s first journey to another world, a throwaway comment by Clara that the TARDIS doesn’t like her (which could mean one of a couple of things and I’m sure we’ll find out what when the time is right) and a mention by The Doctor of his grand-daughter... buy whom he presumably means his travelling companion Susan, who he left on earth after his defeat of the Daleks in The Dalek Invasion Of Earth. Of course, if she was a time lord, like him, she’s presumably long dead by now... erased from existence in the Time War we’ve heard so much about.

There were also some nice sets (lots of reds and earthy colours), some nice costumes (especially some of the alien creatures) and, erm, stuff. Lots of nice stuff which momentarily escapes me. Oh, yeah, the first five or ten minutes were pretty good with The Doctor visiting Oswin number 3 at different points of her life and finding out why the leaf in her book is so precious to her. That was all good stuff.

Also nice to have The Doctor facing death and having his new companion save his life in her second episode. Of course, this was a tactic employed with the second Amy Pond episode too but, who cares, it makes for some dramatic television. Plus, there were some great Doctor-as-messiah quasi religious kind of shots going on in the episode which made for some nice things to look at...

There was no real action in the episode apart from some kind of “low speed” flying bike chase which had some terrible visual effects in it that managed to detract from the action enough to remind me of those old Blakes Seven episodes from the 1970s. I’d go as far as to say that this was pretty much as lifeless and unexciting as one of the modern Doctor Who episodes could get... except I’d also have to make that same comparison if we were watching classic Doctor Who too.

Seriously yawn inducing in places. I’m not gung ho for action scenes usually but this one could have done with a little less “cosmic wonder” and a bit more running around being chased by things. Oh, and probably a bit less singing too. In fact, I know Murray Gold has been accused of overscoring modern Doctor Who before, and it’s something I usually defend him from, but I have to say that this show had so much exciting music going on in the background for so little visual action that you could hear the mindset of the composer as he tried to spice up the on-screen visuals by speeding up the rhythms and throwing everything but the podium in there. While this tactic worked well for Elmer Bernstein in The Magnificent Seven, I’m afraid the lighter weight of the episode couldn’t really support it and, although I’m sure some of the music from that episode will make for a good listen on the inevitable album, it just kinda gets a little too obtrusive in the context of playing support for the visual image in this one.

And that’s all I’ve got to say, really. Some nice performances with everyone working really hard to bring an alien world to life before your very eyes... it just needed to either pick up the pace a little or really slow itself down to a two parter and given some of those heavy dialogue pieces a little more room to breathe perhaps? But one or the other I reckon... this one just felt badly paced.

Never mind. I’ll live. Ice Warrior on a submarine next week so maybe it’ll pick itself back up then.