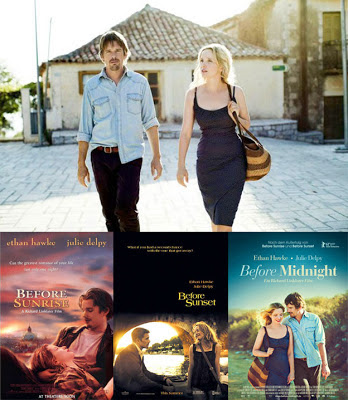 You know, two of my all time favourite movies are just about a couple of people talking to each other for the entire length of the feature... they’re a bit like My Dinner With Andre at a very basic level, but without being confined to just one room and with a less one-sided conversation.

The first of these was directed by Richard Linklater in 1995, who I already knew from his marvellous movie Slacker, and it was called Before Sunrise. It’s a brilliant, charming, funny and very romantic movie, perfect for watching with your lover (except in the case of one of my ex-girlfriends... when I tried to show it to her on Valentines Day and she made me switch it off after a quarter of an hour... she wasn’t a fan).

It tells of one day in the lives of the two lead characters - Jesse, played by Ethan Hawke and Celine, played by Julie Delpy. The two characters meet by accident on a train going somewhere and they get on so well that they both decide to get off the train in Vienna and spend the rest of the day and night there seeing what’s going on before continuing with their respective journeys. The camera follows them as they encounter people and situations of no real consequence and keep up an absolutely charming conversation about various ideas throughout. It seems (and probably was) as much improvised as it was scripted and the film is an absolute testament to the fact that a low, practically non-existent budget can often produce great art.

It was an almost perfect film and the ending was absolutely brilliant. The young lovers, as they come to be over the course of the hours they spend together, are both going back to their homes the next morning... Jesse to the US and Celine back to France. So they make a pact... they will meet each other in exactly one year at a specific time and place and continue their relationship then. No addresses are swapped or numbers given. Just the chance to properly continue what they started in a meeting designed to recapture the fleeting spontaneity of this first encounter. They then go their separate ways and that was it... film finished and the story is done. Or so we thought. It was left up to us to figure out if they got together again in a year’s time or not. It was beautiful.

Except... what nobody knew is that it wasn’t over.

In 1994 Richard Linklater made an absolutely mind blowing and very cool animated film called Waking Life, which will either overload your circuitry by 20 minutes into the running time or will actually force your mind to expand and cope with it and deal with it on its own terms. Two of the many “dream protagonists”, in a five/ten minute cameo, were Jesse and Celine carrying on their conversations from Before Sunset, again voiced by Ethan Hawke and Julie Delpy. It was a nice little tribute to these characters and it was at that point that you start to wonder if, perhaps, Linklater and his two leads were not done with these characters just yet.

Then, out of the blue, nine years after the release of Before Sunset, a sequel movie materialised, with  Hawke and Delpe also contributing greatly to the dialogue and shape of the finished product (as they do in their current collaboration). This was absolutely gob smacking to fans of the first movie who neither expected or really wanted, in all honesty, a sequel to the first. That being said, this is my second favourite “conversation movie” and the thing which got people back into the cinemas to watch it was basically because the film is also set 9 years after the first in movie time too. We all wanted to know if Jesse and Celine both made their rendezvous a year later as they’d planned or if events had transpired to stop them. Well... I’m not giving anything away in this review to spoil it and, without having seen it, you’ve absolutely no way of knowing whether they got together or not. The second film is set over a four or five hour period in Paris and it kind of leaves you almost, but not quite, with a question similar to the ending of the first. A decision is made by one of the characters and you think you know what that decision is but... it’s a transient world. Nothing is set in stone. What happens next?

Well this time fans weren’t going away saying, “We’ll never know.” This time they were saying, “How long until we get to see the next one.” And, of course, the answer to that is... now.

Yay! Jesse and Celine are back!

Nine years, again, in both real and fictional time since the events of the second movie and... yes, things have moved on once again in these two character’s lives. I’m not going to say too much about the story of this one... especially since these really aren’t films that have, or are about, story except in very minimal terms, if you look at the broad arc created by the end of each movie.

Instead, what I will say is... this is another great film in the... um... “Before Series” (I wont say Before Trilogy because I’ll be gutted if they don’t make another one).

This time the “action” (or lack of, in reference to these films) takes place in Greece and the situation the two characters find themselves in is an opportunity centred around Jesse’s occupation in the second and third films. It’s a brilliant meal of a movie but its main course is quite bitter/sweet. The ending is once again left at a place where decisions seem to have been made but, due to the volcanic eruptions preceding this decision, the nature of the ending is not set in concrete and one wonders where the characters will end up in relation to each other within a year of the ending of this one.

There are a couple of things in this one which are a bit of an oddity for this series of films. The first is that for a big chunk of the first half of the movie, the characters are not just interacting with each other but with a bunch of other characters who are their companions at this point in time. This seemed a bit unusual for these movies but I rolled with it and was ultimately rewarded again with the total isolation of these two characters with each other by the last segment.

Secondly, and regular readers may be surprised at this, this film had a musical score in places which really didn’t gel with my remembrances of my experiences of watching these characters before. There’s not much of one and it only comes in at the odd moment but I did feel it was just a little too obtrusive and maybe it’s a sign of the studios perhaps not having enough confidence in the fabulous threesome (the director and the two main leads) at being able to carry the film on their own genius. And, yeah, I recognise the irony of someone like me who regularly champions film music to not want a score in this film. It just felt wrong.

Everything else about it felt right though. The dialogue, performances and extra long takes of between 10 and 20 minutes in some cases (just like the first two movies) were all there and the conversation was gripping and, in places, a little depressing... it has to be said. I was totally hooked again in these fictional people’s lives right from the first shot and, as a consequence, my stomach was doing butterflies as the tone of the film grew darker towards the end... not even Julie Delpy’s magnificently naked breasts were able to stop me worrying about the territory these characters were getting into. This is intense.

I can’t tell you what happens. It would be really terrible of me to do that to you. Just wrong.

All I will say is this... If you liked the other two films in this series, then go and see this one too. It’s my least favourite of the three but by no means less brilliant and it deserves your honest box office coin. If, however, you haven’t seen the first two... steer well clear. You really do have to see these movies in order. These characters are too great for you not to experience their conversational adventures in chronological order... you owe them that much as a fan of cinema in general. Before Midnight is, like the two before it, one of the best films of the year it was released in. If you are into cinema then you need to see these three movies. They are part of what the art is all about.