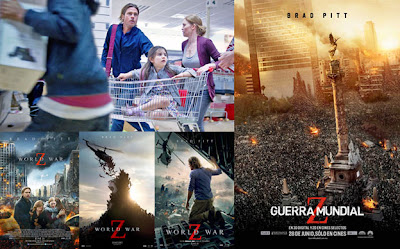 I really didn’t know much about World War Z going in.

In fact, the only four things which I did know were as follows...

1. Brad Pitt is in it. I don’t mind him as an actor but at least one of his decisions in the past, if what I read was reported accurately, caused some bad consequences for other people in the business and consequently, since I don’t know him... I am wary of him. That said, his performance in 12 Monkeys was astonishing and I enjoyed his comic book performance in Inglourious Basterds a heck of a lot too. However, he’s a major star (and producer of this film) and my feelings say that major stars change the tone of projects... and that’s not often a good thing.

2. There was a lot of fuss, really a lot of reported news in the film press, that this project has been going for a long time and that major changes and reshoots were made. This is usually a sign of a bad movie, or often a really good movie which doesn’t match studio expectations of it, which is deemed in need of fixing and that tampering, from what I see of it, is rarely for the better (the extended cut of the Universal remake of The Wolfman, for example, became a contradictory mess in its longer version, whereas the original studio cut is quite watchable - reviewed here).

3. I’ve not read the original novel this thing is based on but I’m told that there is no one central protagonist in the book and that everything is pieced together from different news reports on a global level. Now this could be perceived as a problem because Hollywood and its stars don’t react well to narratives which have no real main protagonists in them but, you can tell even from the trailer, that this movie did have a starring lead role for the picture... Brad Pitt. I wasn’t too worried about this (not as much as I might have been had I read the book, for sure) and I think sometimes in the film industry you have to streamline things down to a central narrative character arc in order to get the film to something watchable... so not too many worries there.

4. The trailer worked really well for me. We had gazillions of zombies eating everything in sight and people in peril. So, really, whatever cynicism I might have been harbouring for the final product on screen... it was going on hold. I like zombie movies. They’re strangely comforting (for the most part).

Now just a couple of days prior to this, I’d heard some criticisms of this film on twitter based on it being filled with action for the first two thirds of the movie and having a strangely subdued last third and, yeah, I can almost see how some people might have had a hard time with that except for one thing, and it’s this...

Although the movie does celebrate zombie action over anything else for the first couple of acts, the third act, while slower in pacing and less spectacular in setting (although no less spectacular in set design), is certainly no less an intense or a suspenseful sequence than what has gone before it. In fact, I’d argue that it’s a whole lot more breathtaking and interesting than the rest of the movie put together... even though by now you’ve completely figured out how the movie is going to finish (I’ll get to that later).

So what we have here is like a big computer game with the first couple of levels in action mode and the final level in stealth mode. Pitt is quite convincing in his role and although it’s not a character driven plot, the film does take time to invest you with a feeling of Pitt’s “family unit”, which is a dead giveaway to the emotional state you will get to at the end of the film and why you know Pitt’s “final solution” will work... it has to in order to pan out the family drama. This drama is badly handled right at the last couple of minutes, I feel, and is one of the worst things about the movie, imbibed with a certain saccharine sweet sentiment instead of going for the natural sugar which was all it needed at this point.

Nevertheless, despite critics redundant rumblings, World War Z is a pretty entertaining time at the movies. It’s basically the big budget end of Hollywood finally catching up to something the low budget end of US film-making has been doing well since the late 1960s and, in this, it does kind of come across as George R. Romero meets 28 Days Later but with a slicker, commercial feel and lots of money to do it in style. But so what? It’s fine by me... I get to see a big budget zombie movie which actually gets to play at local cinemas with enough showings for me to be able to catch it. That’s not a bad thing and, as I say, it was pretty entertaining.

The film enthusiastically goes from one impressive set piece to another and is basically split up into three acts:

1. Escape from the zombie epidemic that suddenly hits where you are living and destroys your entire city in the space of an hour...

2. Become a globe-hopping researcher to try to find the cause of the plague and find some way to stop it... with impressive stop overs in both Korea and Palestine.

3. Go to Cardiff in Wales and sneak around a zombie infested World Health Organisation building with all the atmosphere (and some of the cast) of a really good Season 2 or Season 3 Torchwood episode.

I did find it to be a bit “art-imitates-reality” poignant when Pitt’s character discovers that by immediately lopping off the hand of a female colleague he can halt the infection before it starts, considering the tragic events that have recently plagued his own real life family, but this film is a really well oiled machine of what is known these days as “the summer blockbuster” and it didn’t fail to deliver the goods (as many of them, of course, do fail to do just that).

There were a couple of disappointing things about the movie, though.

I don’t understand the USA ratings system but certainly, over here in the UK, the movie has a 15 rating. That’s kinda crazy because this film is pretty bloodless and lacking the kind of goriness you would usually expect from a good zombie movie. It’s like the producers were playing it safe on every level and not wanting to annoy the censors too much. So anything which might have been better explained by seeing it demonstrated as on screen violence, like the aforementioned, quick fire hand amputation or the killing of an “up-close-and-personal” zombie threat is often just off the side or bottom of the screen where you can’t properly get a handle on it quickly enough. It’s not too detracting or damaging to the movie as a whole, although it obviously distracted me enough to notice it each time they did (or rather, didn’t) do it but I’m guessing this just means there’ll be a harder, longer  and more satisfying cut of the movie released on video at some point.

The other thing which bothered me was the obviousness of the final solution and it’s successful outcome. By the time of the third act, Brad Pitt (and the audience) will have more or less figured out what the “chink” in the zombies’ armour is. However, in the last part the film makers place the lead character in a position where he is surrounded by zombies and there is no way out... unless he tests out his theory on himself and goes with his final solution. Which is what he does and, since we’re already so invested in him getting back to his family, we know it’s going to work, no question. This kind of lets it down in some ways but it doesn’t make it any less watchable for it and it’s only the very end of the picture with the family reunion where it gets maybe just a little less palatable... on the whole.

But there it is. World War Z is a pretty entertaining movie and it certainly won’t let down people who are into these kinds of monster infected pleasures (myself included, of course). The performances are fine and, aside from that one mis-step with the predictability of the “cure”, the writing is pretty good too with some excellent and hard hitting dialogue in places, performed by a cast who are obviously enthusiastic about hitting the right kind of tone for the story. I can’t speak for anyone else who’s seen this movie, obviously, but from my end, that of the endless audience, it’s certainly a top notch summer pop corn movie and people should have a good time with this one. I certainly enjoyed it a heck of a lot more than the last film I saw by this director, Quantum Of Solace, which perhaps isn’t saying a lot, come to think of it. However, World War Z is something I am quite looking forward to introducing to mum and dad when it comes out on Blu Ray... and that’s not a bad thing. Go see it.
Posted by NUTS4R2 at 20:54