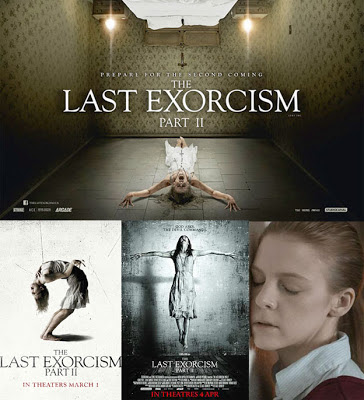 Warning: Very light spoilers possessing
the soul of this review as you read...

Well this movie came as a bit of a surprise when I finally saw it.

A number of years ago now there was a “found footage” horror movie called The Blair Witch Project which was made on a shoestring budget and which went on to conquer the box office and scare people silly. While the iron was hot, a sequel was commissioned by the studio but this dispensed with the dodgy 1st person camera eye view that had so impressed people in the first movie (although this film far from pioneered that style of directing, it certainly repopularised it and the aftermath of that is still with us today) and instead was presented as a straight, linear movie narrative. The seeming touch of brilliance, though, was the fact that it was the so-called found footage from the first movie which inspired the characters in the sequel to proceed into similar territory and get themselves into so much trouble.

Unfortunately, for everyone involved, the second Blair Witch movie turned into “just another teen horror movie” which was dull and uninteresting and it seemed that the filmmakers had been so intent on reaching that easy pot of gold at the end of the rainbow that they had forgotten to make sure that the film turned out to be any good.

Cut to a couple of years ago and a similar “documentary style” footage movie called The Last Exorcism that some people didn’t really go for but which I’d really loved opened in cinemas (my review of it can be found here). When somebody other than the original creative team announced that they would be doing a sequel (so what would that be... The Laster Exorcism?) and that they would be dispensing with the first person camera style in this one also, I was getting a strong sense of deja vu that this was going to be going the same way as the Blair Witch sequel... especially as it comes to pass that “found footage” from the first movie turns up as a youtube video in the second film.

However, where The Last Exorcism Part 2 scores over the Blair Witch Project sequel big time is that, this time, the new creative team actually put together a pretty entertaining movie. I know I’m probably going to be in the minority on this one but, I have to say, I really liked this installment.

Ashley Bell returns to this film in the same role which she played so dazzlingly well in the first movie and this one indeed picks up pretty soon after the last film ended in what I can only call a “blaze of Wheatley”. Only this time she’s not doing hardly any of the “twisted body” thing she did so well in the first movie... this film is not like that. It does its own thing.

Her character, Nell, is “discovered” in the pre-credits sequence, which is another little exercise in jump scare horror, and this pretty much sets the tone for the whole movie and her adventures in a girls orphanage in New Orleans is all about becoming a normal girl who is gradually feeling her recent past catching up with her.

Nell is a name which echoes deep for me in the legacy of cinematic horror. It’s the name which Shirley Jackson gave to her heroine (short for Eleanor but written ghostly on a wall as Nell) in her novel The Haunting Of Hill House which became, and still remains, my favourite movie in the genre when Robert Wise made it into a film in the early sixties, The Haunting (so much so that I’ve never been able to contemplate seeing the remake). Nell in this and the previous movie in The Last Exorcism franchise has fair hair and an innocent to the point of blindingly naive demeanour, just like Jackson’s original heroine, played so well in the sixties movie by Julie Harris and maybe that’s why I have such an affinity with the Nell character in this franchise. More likely, however, it’s probably more because Ashley Bell is such a fantastic actor who really knows how to use her body language to put her character across when the character’s voice leaves her words often unspoken. She’s a really interesting actress who tends to hold your attention whenever she’s on screen.

There’s also another actor back from the previous movie but... I really shouldn’t tell you who. It might spoil the sequences that character is in a little too much for you.

To be honest, the movie proceeds throughout most of its running length to be a series of cheap scares piled on top of yet another sequence of cheap clichéd scares which I can sometimes be critical of as a technique in modern horror... except this movie executes these fright moments so well. It had me jumping at everything... dogs barking and hurling themselves at fences, radios doing spooky volume tricks, birds flying into windows... it’s all there but the director knows how to time it so, even though in most cases you know exactly when and how the scare will be coming, it still manages to give your heart a little rush when it comes. At least, it did that for me.

Nell’s gradual maturation from an innocent little girl through to a point when she is anything but an innocent little girl is both touching and satisfying to watch. There’s a scene in Sam Raimi’s excellent M.R. James retread Drag Me To Hell (reviewed here) where an attempt is made to trap a demon in a goat and then kill the goat before it gets loose again and a similar kind of sequence (in a slightly differently presented way) is played out towards the end of this movie but, where Raimi tends to play his scenes for laughs, this one is played for keeps and the shift in strategy by the exorcist and his secret society in here... their kind of end game last resort... is something which makes you think, oh yeah, this was the devils plan all along, to force this battle right here and now. I don’t want to spoil the final outcome for you but I really loved the last sequence of the movie (as i had the movie before) and, without giving too much away, I would have loved it if somehow a time machine could have been invented to let Bernard Herrmann score the last shot as a backwards xylophone hit over a jump cut. If you know the film I’m referring to here well... when it comes up in this one you’ll know it when you see it.

There is prominent use of CGI in this little end sequence but I just loved it and although there will probably be a lot of detractors to this movie, because it doesn’t do exactly what the first movie did and for a heap of all kinds of other reasons, I know a skillfully put together motion picture when I see one and the performances and standard, but astonishingly effective, horror score straying into the realms of sound design by composer Michael Wandmacher mark this movie out as a much worthy successor to the original film than, say, Damien: Omen 2 was to The Omen (and there’s a good reason I refer to that film series in particular here).

All I can say is, if you liked the first movie and were as astonished by Ashley Bell as I was, here you get to see a less physical but equally enchanting side to her characterisation of Nell and I think you might want to go along and leave your expectations at the door. I know I did and I’m very pleased at that.