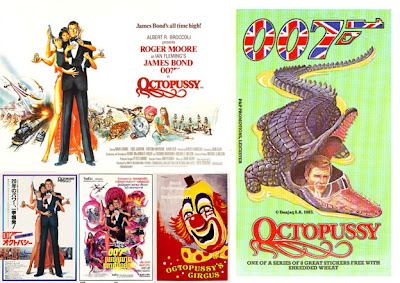 I don’t even know how to start on this one... so I guess I’ll just start off with a reminder that 1983 was the time we had two James Bond movies at the cinema in the same year. But I shouldn’t get ahead of myself here.

Okay, so I was 15 and, four days before Octopussy came out in the UK, my country saw the release of what was probably the most anticipated movie sequel since the days of the cliff hangers. Star Wars Episode 6: Return Of The Jedi is the film that was on everybody’s minds at this point and so, maybe this contributed to my general disappointment with that year’s Bond movie at the time... but I can hardly use the same excuse when, on subsequent viewings, my verdict of the movie really hasn’t changed all that much.

And it’s not like there wasn’t enough hype and publicity surrounding the film either. I even remember working my way through my Shredded Wheat so I could finish the box off and move onto the next one and get another in their series of Octopussy stickers. Oh yes, I remember them well... those stickers. James Bond dressed as a clown... was this meant to be a joke? James Bond’s head peeking out of a one man submarine disguised to look like a crocodile. Well that looks silly. And, yes, it’s in the movie too... and what do you know? It is silly. Granted, Sean Connery swum into a shot disguised as a duck once in Goldfinger, but that was a quick, cheap gimmick... a fake crocodile with a grown man inside it is... well it’s campy and rubbish and that’s just exactly what Octopussy was/is. Campy rubbish of the worst kind... because it’s campy inappropriate rubbish.

I remember coming out the cinema with my mum and she’d quite liked it and I was thinking that maybe something was wrong with me. That wasn’t a Bond movie we just watched, it was a travesty. When the rival Bond production came out at the end of the year, the Thunderball remake Never Say Never Again starring Sean Connery as Bond, well it was obvious that the Connery flick had much more edge and ‘entertainment weight’ to it than the EON produced flick. I was sick to death of Moore in the role and completely fed up with the direction that the films were heading in... so as a consequence, I never even bothered to go to the cinema to see A View To A Kill when it finally came out. No more Moore for me, I’d decided... purely on the lousiness of this film.

Again, I’ve nothing against director John Glen. He got the best he could out of an aging Bond and the raw materials he had to work with... it just all falls rather flat for me. I remember at the time thinking that Octopussy was the worst James Bond movie to ever be released into cinemas and it wasn’t until decades later when two equally bad Bond films hit our screens, Die Another Day and Quantum Of Solace, that I was able to make good on my new comparison/insult of... “all in all I’d rather be watching Octopussy”. Even the much lamentable License To Kill has more edge to it than Octopussy.

So, what is there of note in this movie? Well, it sees Maude Adams returning to the franchise in the title role after playing Scaramanga’s girlfriend in The Man With The Golden Gun. It also had a joyful but possibly somewhat embarrassing performance by professional tennis player Vijay Amitraj playing... well he’s playing himself, using professional tennis playing as his cover for being in the secret service. Which is all well and good and certainly is no different from, say, Peter Falk playing himself who was also actually an angel who returned to Earth from heaven and became an actor called Peter Falk in Wim Wenders’ Wings Of Desire and Faraway, So Close! However, the fact that the Vijay character in this film is bloodlessly killed with a highly impractical ‘spinning buzzsaw yo-yo’ but, in fact, didn’t get killed in real life, was a source of profound puzzlement to me at the time. Nowadays I can just shake it off as needless twaddle in a film which is just too awful to worry or care about... but at the time I found that concept kinda mind bending.

So what else? Well the recurring character of General Gogol has a much more active role in this movie... as does Desmond Llewellyn’s Q, who takes more of an integral part in Bond’s on screen shenanigans here than he does in most of the films. And we also have respected actor Steven Berkoff playing a thuggish Russian military villain, hamming it up good and proper and once again proving that, for a serious thespian, he’ll do anything for money (hopefully, he does this in the same spirit that John Cassavetes used to... use the process of acting in bobbins to fund his own artistic projects).

None of these things really make the movie worth actually watching, however.

The one redeeming element, I think, that Octopussy does have going for it is, despite an absolutely awful “all time low” of a title song, is John Barry’s amazing score. How he could get inspired enough by this movie to turn in what is almost an old school young-Barry Bond score is beyond me but this one certainly goes in the right direction and, as a stand alone listen away from the context of the movie, it’s really not a bad score. Such a shame it’s just attached to such a yawn fest of a movie. This is one of the worst three films in Bond history, as far as I’m concerned. Even Skyfall was better than Octopussy.

And that’s about all I’ve got to say about this one. Not James Bond’s finest hour, I have to say.

Dr. No
From Russia With Love
Goldfinger
Thunderball
You Only Live Twice
On Her Majesty’s Secret Service
Diamonds Are Forever
Live And Let Die
The Man With The Golden Gun
The Spy Who Loved Me
Moonraker
For Your Eyes Only
Octopussy
A View To A Kill
The LIving Daylights
Licence To Kill
GoldenEye
Tomorrow Never Dies
The World Is Not Enough
Die Another Day
Casino Royale
Quantum Of Solace
Skyfall
S.P.E.C.T.R.E
Posted by NUTS4R2 at 21:54