The Flesh And The Fiends/Burke And Hare Double 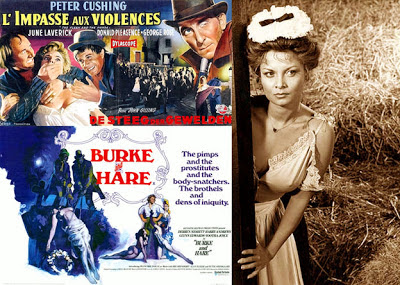 Snatch Of The Day

The Flesh And The Fiends
1960 UK
Directed by John Gilling

Both movies shown as part of the Classic Horror Campaign
to bring horror double bills back to BBC2 television.

Warning: Very slight spoilers snatched from their last resting
place and scattered throughout the following paragraphs.

Now this was an interesting proposition. I’d already seen an “inspired by” version of the real life tale of body snatchers Burke and Hare in Val Lewton’s classic production The Body Snatcher, starring Boris Karloff and Bela Lugosi, which changed the names and played even harder and looser with the established facts than either The Flesh And The Fiends or Burke And Hare did, to be honest. Here, however, the current Classic Horror Campaign team of @cyberschizoid and @DrKarenOughton gave us all the chance to see two movies inspired by these events in one sitting and the contrast between the two productions couldn’t have been more telling about the times in which they were made.

To be honest, though, it wasn’t this that got me to brave the very depths of darkest London on a Saturday afternoon. The main pull for me was the fact that one of the stars of Burke And Hare, the lovely Francoise Pascale (@Fpascal) would be in attendance to talk a bit about the movie and to sign copies of her new autobiography, which can be found at her website here.  Now I’d accidentally met Francoise at a signing session at the Westminster Film Fair earlier in the year and had been bowled over by the lady’s charm and enthusiasm, so to be honest it was more in mind with the thought of buying a copy of her book and seeing one of her more prominent film roles that I attended the said event than for anything else.

That being said, the Classic Horror Campaign’s screening was another corker of a double bill and I shall certainly be going back for more of those when I can claw back some time to attend. The two films I saw this time are both items I actually hadn’t seen before, and I have to say the presentation was both fascinating and entertaining... especially in light of the second of the two, Burke And Hare.

The Flesh And The Fiends was shot in black and white by director John Gilling, a man who would go on to direct some classic Hammer Horror movies but, it has to be said, I was not particularly impressed with the majority of the look and feel of the movie, if truth be told. The design of the shots and the way in which they were edited left me pretty uninspired on this one, to be honest but the one thing you really couldn’t fault it for were the performances.

Peter Cushing plays Doctor Knox crisply, without emotion for the most part... and with an eyelid that hangs down over one of his eyes... giving him a slightly creepy look, to be sure. Burke and Hare themselves are played in this one by George Rose and Donald Pleasance and they do it so well that you really wouldn’t want to fall afoul of either of these gentlemen on a dark night. Between them they emit a potent blend of brutish force and calculated ruthlessness, which certainly gives the characters the kind of gravitas they needed to live up to the real life villains the actors were trying to portray.

The second movie of this double feature, Burke And Hare, is a big, multicoloured confection of a film which could only have come out of that late 1960s/early 1970s period, I reckon. Derren Nesbitt, who I knew primarily for his portrayal of Number Two in The Prisoner episode It’s Your Funeral, plays Burke and Minder regular Glynn Edwards does the honours for Hare. The way that they are played is dictated very much by the tone of the film which seems to me to have been a direct attempt to turn the story into a light and fluffy comedy and sex it up for a cinema-going audience who were more interested in laughs and thrills than any serious attempt at portraying the facts of the case... which is okay by me, I love this kind of stuff.

British character actor Harry Andrews plays Dr. Knox in this one and plays him with a similar sense of authority as Peter Cushing did in The Flesh And The Fiends, but with a little more emotion. Unlike Cushing, though, he elects to play his role (or someone elected it for him) with a black lens on one of his eye glasses, as opposed to the downturned eyelid of Cushing’s incarnation of the role. It was also good to see James Hayter again for a brief scene. He always gives a good performance. And Yootha Joyce as Hare’s wife was also brilliant and helped give the movie another comical support.

And then, of course, there was the stunningly lovely (and still absolutely gorgeous as she is now, as it happens) Francoise Pascal, playing the romantic interest in the form of a prostitute in this version of the tale... in a role which was very much the equivalent of the one Billie Whitelaw played in The Flesh And The Fiends. Both were good in their respective roles but Pascal really knocks it out of the park in this one. And it wasn’t just because she runs around a lot of the film in various states of undress either... although that was also more than worth the price of admission, to be sure. During her interview session between the two films which made up this double bill, she said that she didn’t think she was all that good in this. Well I have to beg to differ on that verdict I’m afraid. She is definitely the only person you are watching whenever she lights up the screen on this one and really does give the film an enormous lift. Her acting is more than fine! She signed her book at the end of the film for me and I have to say, I look forward to reading this as part of my “holiday reading” in July. A review, I’m sure, will be forthcoming.

An in yer face comedy song called Burke And Hare by the popular band Scaffold (remember their big hits Lilly The Pink and Thank You Very Much... I remember Pinky And Perky singing that one at the end of their show every week) sets the tone to not take this movie too seriously right from the outset. The producers must have really liked this song, actually, because it’s included in the film three times... once at the start, once at the end and also for a “body snatching is fun” kind of montage sequence somewhere in the middle. Strange stuff.

In fact, the musical score by Roger Webb is quite odd all the way through. It’s like they are trying to inject even more fun into it by giving it something which almost sounded like a Carry On film soundtrack but with the added odd moment of B-movie terror stinger at certain points. In fact, one of my bestest friends who I was with at the time, @cultofthecinema, leant over during the film and whispered that the music was making him expect Sid James to pop out from behind a door at any moment. I’d have to agree with him that the scoring was maybe a little too strong at times... perhaps in an attempt to lift parts of the movie that the producers possibly didn’t have confidence in. Still, it’s of its time and I certainly enjoyed it as much as almost any other element in the movie.

In real life, after Hare was released due to turning King’s evidence, there were a lot of stories about what happened to him. Some say “the mob” got him, some say he was thrown into a lime pit and the no less credible accounts say he went to live with an in-law for the rest of his days. Each of the films here take a different ending... with the ending of Burke And Hare being a little rushed and more abrupt than I was expecting, to be honest. Burke And Hare has one of those “this is what happened to the characters next” kind of voice over narratives at the end of the film... before crashing into that Scaffold song again. This second movie goes with the lime pit story while The Flesh And The Fiends shows Donald Pleasance being horribly blinded with a lighted torch. More interesting than the fates of the two victims is the fate of Doctor Knox. He fares pretty well by the end of the first one than the second but in each of the adaptations he’s certainly portrayed as a misguided good guy, paying for questionably supplied corpses in the hopes of pioneering the cause for good, future doctors. In real life, of course, his reputation by association with Burke and Hare was a little less palatable and more than a little tarnished... but, of course, was not the career destroyer one would expect from a similar chain of events if something like this ever went down today.

Of the two films, I found Burke And Hare to be absolute brilliant (and something I ordered the next day on BluRay as it happens) and The Flesh And The Fiends to be more interesting in terms of studying the performances, especially that of Cushing, who was already being associated with and exploited for, certainly with some of the posters, his recurring role of Baron Frankenstein for Hammer.

All in all, this was another sure fire winner from the Classic Horror Campaign team. I’ll definitely be going back for more! Check out their web page here http://www.classichorrorcampaign.com/ and sign their petition!

And for more details about the charming Francoise Pascal, and to grab a copy of her autobiography, go to her website here... http://francoisepascal.co.uk/
Posted by NUTS4R2 at 19:21