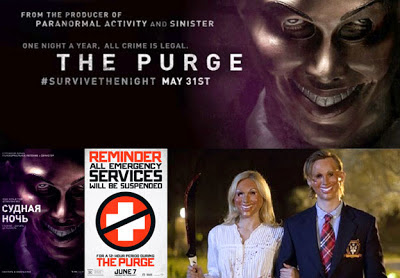 Warning: There will be spoilers purging themselves
randomly in this review. You have been warned.

I really like Ethan Hawke but there aren’t that many movies I actually get to see with him in these days. All his best ones are directed by Richard Linklater and the horror movie Sinister, which he toplined last year, kinda disappointed me somewhat (my review here). However, I’d seen some people on twitter talking about a new movie called The Purge which, somehow, I was completely unaware of. I checked out the trailer online after this and thought I’d give it a go.

Now there have been a lot of negative reviews on this one over the last week or so, which makes me kinda grateful that the two people on twitter who had the conversation I was watching were among the few people who'd taken a relatively positive experience away from this movie... otherwise I probably wouldn’t have bothered to pursue this one, if I’m being truthful. As it stands, I did have a fair few problems with this movie myself but I do think it’s being unfairly criticised at the moment by people maybe expecting something different from what it delivers and although there was some not great stuff going on with it, it also had some really strong points to it as well so... I think this is really going to be a little bit of a defence of the movie too, to an extent.

The appeal for me on this one for example, apart from Ethan Hawke being a cool dude in most of the films I’d seen him in, was that the basic idea for the movie, of having an “all crime including murder goes legal” for 12 hours a year event, was exactly the kind of gritty conceptual science-fiction concept that Hollywood used to make so well back in the late 1960s and early 1970s. You know the kinds of movies I mean. I’m talking stuff like Planet Of The Apes, Rollerball, The Omega Man, The Ultimate Warrior, Soylent Green, Westworld, Demon Seed... stuff like that. Often they’d have someone like Chuck Heston or Yul Brinner running around in them... but not always.

Well I have to say that I was pleasantly surprised that this movie managed to maintain that kind of high concept, early 70s atmosphere for a lot of the movie. It’s not just a mindless bunch of action scenes thrown together... it does throw out questions about this near future society who choose to have an annual purge of savagery to keep the crime rate down and forces you, very simply, to question the moral dilemma of the main protagonists of this movie in a speculative setting which you wouldn’t be able to realistically explore in the confines of real life to this degree. And, of course, this is one of the main tenets of the best kind of science fiction... to explore basic questions, problems and dilemmas of the human condition in just this kind of speculative setting which allows you to scratch deeper into the surface of an idea than mere real life could.

So I was really happy that this film does confront certain questions of basic right and wrong and, frankly, very respectful of the decision of the writers/filmmakers to not take sides and draw their own conclusions for you. There’s no judgement held here, except for maybe the US constitution’s right to bear arms and, though this is firmly encapsulated into various character’s ways of life here, it rightly pails before the bigger questions like... is it right to sacrifice one human life in order to save your own and that of your loved ones? Happily, as I said, the film does not spoon feed you anything and lets the various visual calms between action sequences wash these kinds of ideas over you in a way that forces you to confront them yourself.

The downside of this is that like many high concept science fiction films where that simple idea is the driving force around the narrative, there’s not a heck of a lot else in the way of storyline to get to. The main meal is the concept and some people in today’s audiences, I suspect, are going to find it just a little too simplistic in comparison to what they’ve come to expect from a modern screen entertainment. It’s actually got a lot more meat to it than most celluloid dished these days but, because it just goes from A to B in a straightforward, linear fashion with no real surprises... I think a lot of people might switch off to this movie. I thought the basic plotting was fine though, precisely because it allowed the moral dilemmas to come to the fore and force you to think on your feet.

However, I did have massive problems with this movie too.

The first problem was predictability. There’s a character introduced very early on in the film and you just know that she and the local neighbours are going to come back towards the end of the movie and wind up trying to kill the main protagonists. She gives the wife, played by Lena Headey, a tin of home made cookies right at the start of the picture and already I was thinking... “Are those cookies going to turn out to be poisoned or something?” because you could tell by the way these characters were highlighted for just a little too much screen time that there was going to be some clash between them later on in the movie. This was a really obvious set up and I’d rather they would have introduced the concept of the neighbourhood second hand from the main protagonists and slowly revealed the jealousy and hate that was lurking there through the eyes of the family, rather than hit you on the head with it at the start of the picture.

The other two obvious things were that you knew Ethan Hawke’s daughter’s “forbidden boyfriend” would try to kill Hawke at some point and the fact that Hawke's young son had a mobile camera on tracks that he’d just upgraded to be equipped with night vision, meant that this gadget would also come back at some point as some kind of heroic rescue component in the latter stages of the film. And yeah, bingo, it did. It was like they wanted to be really obvious about spelling out all the traps and aids which the main family could ether fall into or use to their advantage later in the film and get it out of the way within the first 20 minutes of the running time. It all seemed so obvious and fake.

But, even with all that telegraphing in the earlier scenes, the film still went along and tried to “have its deus ex machina and eat it too” because there’s a sequence, a really intense  sequence actually, where the home invasion battle of the movie begins proper, and there was a kind of repeat motif going on about building up expectations of death and then swooping in to save the day. I honestly couldn’t count the number of times, but it was maybe four or five, when a family member got within an inch of death before somebody else walked into a room and instantly removed the danger with a few spare rounds of plentiful ammunition. Seriously people? I mean, yeah, you can maybe get away with it once if you’re going for that kind of “on-the-edge-of-your-seat” bluff but not four or five times a row in quick succession. After time number two, you stop getting worried... either something will happen to stop character Y killing character X or it wont... and it doesn’t matter anymore because it just feels like one big repetitive cheat. Which is a shame because a lot of the film is quite strong.

The cast are terrific, firstly... with special shout out going to some guy I’d not heard of before called Rhys Wakefield who played the main, lead villain as a kind of well spoken yuppie who you really want to see killed off as quickly as possible. Known in the cast as only “polite stranger” the juxtaposition of rich, well mannered breeding and unconcealed blood lust leaves a nasty taste on the tongue and this guy is obviously someone to watch out for in future movies... as long as he doesn’t manage to get himself typecast as playing villains all the time.

Asides from Ethan Hawke and Lena Headey, there’s also a “bloody stranger” who is played by a guy called Edwin Hodge... unfortunately his character is merely there as a catalyst for the problem our main protagonists are in and it’s so very obvious that he is going to end up shrugging off the treatment he suffers at the hands of these people (which is where the movie really starts to wallow in its shades of grey, quite successfully and mostly unflinchingly) and living up to his own moral code and turning up again like the cavalry in the last act. I wish the character hadn’t done that, in fact, because again it was so predictable but, predictable or not, he played the character well and made him someone likable to the audience... so you can at least emotionally invest in him when you need to. Job done on that count by a great little actor.

What I will say about the last half an hour or so, which is for me when the film really loses its moral edge for a little while (but makes up for it in bloody carnage), is that the stealth action sequences which mostly make up the climax of the movie are quite effective in their actual shooting and intensity... asides from the fistful of miracle rescue moments I was talking about earlier. There was one little sequence where Ethan Hawke ends up in hand to hand combat with about five of the “bad guys”, for example, which reminded me of that first, intense fight sequence in Kill Bill Vol. 1... the editing and sound design made it all quite brutal and in your face... well until the inevitable “quick save” moment.

The music, too, was pretty interesting. I remember it being fairly minimal and it blended nicely with that “final days of old Hollywood” sci-fi ambience which I believe it was half trying to emulate. I don’t think it’s going to be getting a stand alone release on CD which is a shame because I’d quite like to have a listen to this one properly, away from the movie. It serves it very well though and resists the temptation, in most places, to overstate the on-screen action too much.

The Purge is, frankly, not as great as it could have been but certainly not deserving of the flack it’s been getting from some quarters. If you are going there because it’s being sold almost as a horror film (from the producer of Paranormal Activity and Sinister, as the UK poster screams) then you’re probably going to be a little disappointed... but if you’re looking for a simple but strong conceptual sci-fi film and you don’t mind about the obligatory modern mass carnage element which the film inevitably builds up to, then it might be worth a smidgeon of your time to check this one out and purge a little.