The Woman From The Sea (Kaitei Kara Kita Onna) 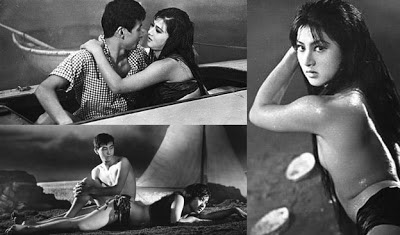 Warning: Slight spoilers swimming around the depths this review...

This is a movie which I had a bit of a strange reaction to when I finally saw it. I went to an NFT screening with JamesDevereaux of The Great Acting Blog and after the film was done he asked me what I thought of it and, in all honesty, I felt little disappointed but ultimately wanting to take another look at it... which is unlikely at the moment since the movie has never been made available on video in a country which would necessitate a subtitled print of a relatively (for Western audiences) obscure film. I said I’d need to sleep on it and, after a few fitful attempts at sleep (my personal life at the moment is a wreck) I have come to the conclusion that it’s a film I’d very much like to rewatch and let grow on me. Which must mean I kinda liked it, right? My feelings will probably be more apparent to me as I finish writing this review.

The film was screening as part of a season of old Nikkatsu studio films at the National Film Theatre and the curator of the event, Jasper Sharp, came out and did a little intro to the movie. Now bearing in mind the NFT staff always give out fact sheets containing an article about the movie you’re about to watch before the screening, I have to say that the gentleman in question was, for the most part, just underlining what I’d already only just read on the programme notes. However, I am grateful to this guy because he mentioned one insightful scrap of information in his opening spiel which, although I would probably have arrived at the same conclusion myself after watching the film, I have to give credit to him for because he pointed it out first and maybe I was looking out for it. That information was a comparison of this film and others like it to... Scooby Doo... and I’ll explain just why I agree with that proposition in a little while.

So the first thing I have to say is that it’s very much of its time, but for an American or British picture, in terms of cutting and editing. Even the shot set ups, although there were a couple of stand outs, were not what I was expecting from a Nikkatsu studio picture from this specific era (Nikkatsu are, of course, Japan’s oldest film studio). Most, not all but most, of the shots are a little less stylised and the space less artificially populated than I would suspect from some of the giants of Nikkatsu... people like Seijun Suzuki and his ilk. Instead, the movie relies on a more charming and comfortable feeling of community injected into the scripting and acting. The acting, by the way, was pretty matter of fact but stronger for it in this one, with special mention going to whoever the lady was who played the main male protagonist’s aunt.

The film took me by surprise because I was expecting something more serious and less lightweight for a picture that essentially contains supernatural elements mostly associated with the horror genre and, indeed, you can certainly see strong elements of that genre in this film but in a more “gee whiz” kind of presentation. Dealing with a beautiful (and HIsako Tsukuba really does have a searing presence in this role) fish-woman who attaches herself to our main protagonist Toshio (played by Tamio Kawachi) early on in the film, I was expecting something a little more haunting and poetic like a watery version of Kaneto Shindô’s excellent film about cat spirits, Kuroneko. Instead, we had a similar idea but with a lady who is a shark and who has been poaching and eating fish, not to mention feasting down on some of the locals as part of her diet too.

The strange bit is that the whole movie has been cross-pollinated with what I can only assume are the Japanese equivalent of the American beach culture movies of the time (you know, stuff like the Frankie Avalon/Annette Funicelli vehicle Beach Blanket Bingo). These were apparently (and again thanks to Jasper Sharp for this) known as “sun tribe” movies and this makes for a rather uneasy, if spectacularly interesting, blend to watch on screen because, on the one hand you have a threat to the community in the form of a hostile, aggressive fish-woman who lures her victims to their death and eats them and it’s all mixed in with the same fish-woman and Toshio getting all teenage romantic and starry eyed. It’s quite a stark contrast at times too, because the villagers who seek to slay this beautiful monster are really quite viscous in their intent and even Toshio’s brother is killed off by the titular monster.

And while all this is going on, the great Japanese composer Masaru Sato’s score is enhancing the shenanigans even further and this is where the Scooby Doo analogy really takes hold because one of the methods the filmmakers use to give the audience the message that this is a wholesome movie about a bunch of kids investigating groovy mysteries is to have Sato deliver a score full of weird jazz and percussion hits and, annoyingly, Hawaiian guitar stingers... all dropped in almost without structure, or at least quite randomly, within the underlying music. And thinking of it, although it’s been many decades since I watched an episode of Scooby Doo, an extremely similar method of scoring was taking place in those early cartoons and this does give the picture a very strong message that it’s all just a heady, teenage romp.

Except it’s not. People are dying in brutal fashion and even Toshio is in line to be the next meal of the young “fish themed maiden”. So it’s all very interesting actually.

At the end of the day... I was fairly entertained by this film and I would certainly pay out for a DVD or Blu Ray of this movie if it was available (I’m looking at you Criterion Eclipse!) An interesting experience and one that people who are into exploring different movies should all strive to seek out... or at least a movie in a similar vein. Time and money well spent.