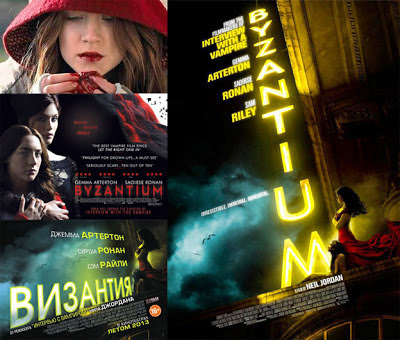 I don’t know much about director Neil Jordan, truth be told. I think I saw The Company Of Wolves once, many years/decades ago, but that was it. But I have seen a fair amount of vampire movies and I remember that last year I saw a really good one from Germany called We Are The Night (reviewed here). Since vampire films have become so clichéd again at this particular point in cinema history, I thought the odds of finding a really decent new one like that were pretty astronomical if I’m being honest with you. To discover two such films in such close proximity would, in all fairness, be fairly unlikely.

But, I’m happy to report that Byzantium is just such a film. A truly great vampire movie that people who are interested in this genre will want to see. We also have the invention of a new term for vampires which is pretty cool if you don’t want to just come out with "the V word" and keep a certain distance to a little of the previous genre baggage. In Blade Runner, Ridley Scott’s “inspired by” movie “adaptation” of Philip K. Dick’s Do Androids Dream of Electric Sheep?, Scott coined the term replicant to give what became his artificial humans an air of gravitas that the term android just didn’t carry anymore. Similarly, the screenplay to this film by Moira Buffini, based on her own play, comes up with the term “sucreant”... which I really like the sound of, to be honest. It sounds quite filthy, to be sure, and almost instantly conjures up the dark sexuality implicit in the kiss of a vampire.

The film seems to me to concern itself with three main themes, one of which is very typical of a vampire movie.

The first of these is, of course, the question of survival. Vampires survive, and make themselves villains in the eyes of the living, by drinking the blood of the living. Byzantium’s two main female protagonists are vampires sharing a certain relationship (I won’t spoil it by telling you right from the ‘bat’ what that relationship actually is) and managing to survive over the millennia by being ruthless and moving on from place to place when the going gets tough. These two central characters have been running for a long time... but I won’t tell you why, because it will become apparent as you watch.

The second of the themes this movie concerns itself with, it seems to me, is temporal displacement. The movie works on revelations through flashback and sometimes, often in fact, those flashbacks are cross cut with the “present” of the character’s timelines, mixed up in a ghostly fashion through both editing and shots where characters share screen time with other versions of themselves. It sounds clumsy, I know, but actually this director does this with a very nimble touch and the results are pure visual and audio poetry in the mode of some of the great European directors over the years, as opposed to what might have been less confidently handled scenes in the hands of another director.

On the first time I thought I was watching a flashback, for example, which was cross cut with one of the two protagonists talking about the past life of the other... it turned out I wasn’t watching a flashback at all but two separate incidents from the same story happening simultaneously. So the director not only dislocates the characters in time due to the way the narrative leads us in to expecting the possibility of flashback, he also dislocates the very audience who are watching the film. So when the film does go into flashback territory, very soon after, he has already set up the feeling that time is not something which vampires worry about or neccessarily perceive in the same way that we do, despite Gemma Arterton’s alpha female Clara constantly telling her companion not to “look back”. This is a brilliant approach to the telling of the story and it carries all the way through the movie until we get to a certain point near the films beautiful climax.

The third theme this movie is about is... the telling of a story. Now a lot of directors (more than I care for) hold dear the idea that their function as filmmakers is to tell a story. It’s always a statement which causes me to groan loudly because it denies the possibility of cinema to exist without narrative structure... which it clearly can. However, unlike many films, this one isn’t just about the telling of the main protagonist’s story... it’s also about the telling of that story and the consequences of its revelation. And that’s a very interesting thing and, because we have this kind of narrative displacement already in the way that this tale is approached... what could have been a very simple storyline is revealed in tiny pieces and it’s only right near the end that we get the whole truth of the history of the two characters. And it’s even much before then that the discovery and telling of that history becomes a prominent point in the story in and of itself.

And again, because of the juxtaposition of two linear timelines, with one going from A - Z but with the back story scrambled and scattered into a different order and then pitched against it, our sense of temporal structure is shifted in exactly the way that the younger of the two female vampires, Eleanor, played by Saoirse Ronan (perhaps best known for her superb portrayal of the title character in Hanna) experiences it. Time is turned somewhat topsy turvy in a sucreant’s world and this is implicit in the creation process of the species as shown in the place of each vampire’s creation. The very act of becoming a vampire is portrayed as a kind of temporal trick... so this temporal misalignment also becomes part of the narrative thrust which surrounds the world of our main characters. And, of course, because of the way the back story develops as one displaced fragment at a time, it’s sort of like watching a film directed by Nicholas Roeg in some ways, but slowed down to a more relaxed pace which lets itself unfold like the slow opening of a piece of paper with an important word of revelation on it.

The performances are incredible.

I would expect no less of Gemma Arterton now, to be honest. She’s proven herself to be one of the powerhouse actresses of her generation and I look forward to being completely immersed in her character whenever I see her plying her trade on screen. Absolutely amazing.

Brilliant, too, is Saoirse Ronan as the younger of the two vampires. She was brilliant in Hanna and proves here that the performance was no flash in the pan, playing a vulnerable but courageous soul who’s voice-over narrative helps imbibe the already beautiful visual imagery with a deeply poetic feel... and this film is truly a study in the cinema of poetry made flesh. Not quite in the same way as Andrei Tarkovsky or Ingmar Bergman might have achieved that kind of feel but certainly Jordan’s treatment of the text and his faith in his cast and crew delivers a beautiful piece of art that could have easily turned into true exploitation cinema if he and his dark practitioners in the art of collaborative cinema had proven to have a less deft touch. Add in cast members like the always watchable Daniel Mays and the ever changing chameleon actor Caleb Landry Jones and you have a movie which is, in fact, a true masterpiece.

It also, having said all that, doesn’t steer away from the graphic violence or the action set pieces either. A lot of the film is shot with beautifully slow moving camera which slowly reveals the way the actors are related to the space around them and changes your perceptions of that sometimes over the duration of the shot. But when an action piece is called for, Jordan has no problem adjusting the tempo and the editing style to hook us into the hard edged action mode and, similarly, when a piece of vampiric violence is called for, made novelty with a nice little substitute for fangs (which, again, I won’t spoil here) then he really delivers. There’s a decapitation scene at one point which really goes for it and treads the fine line between the poetry of violence and all out unpleasantness which really works well.

The film is not that predictable either, possibly due to the narrative structure, and that’s really something rare these days too. It will have you guessing right up until the end which heads are going to roll, so to speak, and you’ll definitely be rooting for people who may have been portrayed as less sympathetic in anyone else’s retelling of the story.

There’s some nice little shout out’s for vampire fans too, such as Clara going under the assumed name of Carmilla, in reference to Sheridan La Fanu’s short story of the Karnsteins (much filmed in many variations by various directors over the years) and the scene where Eleanour is watching Hammer’s Dracula Prince of Darkness in the hotel she is staying in. Alas, the hotel Byzantium in no way, it seems to me, parallels the hotel in Daughters Of Darkness... but one wonders if that was in the writer’s mind.

It’s also interesting in that, like a lot of modern vampire movies, it plays hard and fast with the “established” rules of the game and picks and chooses just which parts of the myth it wants to retain for the sake of convenience. So, for instance, the vampires in this story are fine hanging around in the sunlight (although they “prefer” the night) but they still need an invitation into somebody’s house to be able to gain entry. It’s always interesting to see which parts modern filmmakers will retain and which they will leave by the wayside... the choices made in this one are all pretty intelligent ones and don’t really hinder the story and it’s telling in any way. Nor set it apart from the established mythology too much either. It invents, adds and enriches without alienating itself too much from its cinematic and literary legacy.

What more can I say? Byzantium is just absolutely bloody brilliant... and I do mean bloody, at times. It’s an absolute must for all true lovers of the vampire genre (and is probably not for Twilight fans, I would guess) and even if you are not a follower of that particular vein of cinema, it’s certainly an intelligently crafted piece of celluloidal delight (as much as that can mean in the digital age) and would still be worth taking a look at whether you’re a fan of these kinds of films or not. An absolute full on recommendation from me. Miss it at your peril.
Posted by NUTS4R2 at 19:44