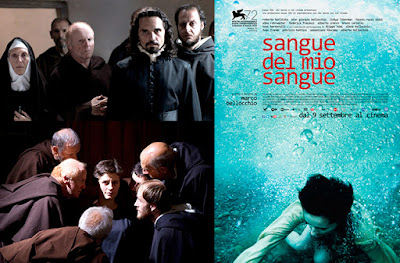 Marco Bellocchio’s new film, Blood Of My Blood, is one of the three films I picked out to see at the London Film Festival this year because the premise sounded intriguing. It also sounded very similar, in some respects, to a movie called The Witches’ Sabbath which has been languishing in my ‘to watch’ pile of DVDs for almost a year now. Which, bizarrely, I found out on the IMDB the day after I watched Blood Of My Blood, is also by this same director... a man whose work I have not seen before. Must be something in my subconscious picked this one out of this year’s programme to apply for the tickets, I reckon.

This movie is interesting in that it’s a film of two definitive halves, both set in the small town of Bobbio but in two different time periods. One section set historically at a time where suspected witches were being tortured for confessions by various monks in their monasteries and then flipping over to the present day halfway through the movie. The main lead actor, Pier Giorgio Bellocchio who plays Federico, is also the producer and son of the director and, like a few people in this movie, he has a dual role playing a character and then, later, a different person in contemporary times... presumably an ancestor of the one he played in the first part.

The plot involves a beautiful actress called Lidiya Liberman, in her debut role, playing Benedetta, a woman who the monks need to confess to consorting with Satan to allow Federico’s twin brother to be buried properly, rather than as a suicide which goes against God. In order for that to happen, they have to prove that he was not in sound mind and committing the action of his own free will and so... they need to torture a confession out of Benedetta.

The first half of the movie is Federico going from hatred to love of Benedetta as she undergoes fairly common witchcraft style trials such as the “if she floats she’s guilty” variety and, surprisingly, passing them all until she gets to a point where a kind of compromise is reached and she is, rather than burnt, walled alive into a tiny cubicle.

When we jump to the present day, we follow the upset caused by a Russian businessman who wants to buy the building in which Benedetta was walled up in and the current owner, an old vampire from a secret society of vampires, who wants to block this from happening but isn’t really in a position to. There are echoes from the past as he goes about his business and spies a new waitress in town who is the dead spit of Benedetta. Is she an ancestor? Well probably not as a nice revelation scene about her nature takes place in flashback towards the end of the movie... but I won’t spoil that moment for you here.

There are also some nice comedy moments, during the first half especially, where Federico introduces the two women he is staying with while he is visiting the monks, to the fanning of their sexual curiosity and awakening of their desires... which Federico is able to kindle and satisfy in one hit. He does tend to put it about a bit in his earlier incarnation, it has to be said.

Now there’s an interesting thing about the camerawork on this one, I noticed. Specifically, a lot of the shots in the first half of the film seem to be pitched from a point of view either slightly below or slightly above a ‘square on’ view. Not everything in the first half of the movie is shot like this but a lot of it seemed to be and that means that you are always either looking slightly down or slightly up at the characters as they come into view. This is bolstered by the odd extreme shot taken from either a greater height, such as the top of a staircase looking down at a door (something which is used a few times in the first part of the movie and again in the contemporary section of the film) or a shot from well below the view of the particular subject matter of a sequence. The latter is best demonstrated in a really interesting view point as when Benedetta is being thrown into a river loaded down with chains... the camera views her atop a cliff from under the water as a blur, later returning to this point of view as her body drops and breaks the surface of the water. There are definitely some nice things being done with the cinematography on this one.

The musical score by Carlo Crivelli is mostly appropriate and tasteful (asides from a few overtly comically scored moments, perhaps) but at a few points a couple of songs by ‘Scala & Kolacny Brothers’ are used and one of them, in the same sequence as the trial by water I described earlier, starting up when Benedetta is weighted down at the bottom of the lake, is Self-fulfilling Prophecy. Now I don’t know why the director and producers chose this but it popped me straight out of the movie for two reasons... other than for being a truly beautiful and haunting piece of music in its own right (which I guess means I’ve maybe answered my own question as to why it was chosen, to some respect). One reason is because it’s almost a more modern sound and doesn’t feel contemporary to the period it’s supporting. Now this is not a new thing and is, actually, a very common practice of musical anachronism found in more films than you might expect. To be fair, it’s not being used as ‘source music’... but I just find that when songs with vocalised lyrics are used that it tends to ‘break the spell’ of the illusion of the movie much more than if it was a purely instrumental piece. This is not what I would expect from the period in which this portion of the film is set.

Secondly, it’s already a piece of music I associate with both cinema and vampirism, being as it’s used to very good effect on the 2010 German vampire movie We Are The Night, reviewed here. So I don’t know if this was chosen to maybe evoke the idea of vampirism into the subtext of the movie before the overt introduction of one in the second part of the story but, much as I love this particular piece of music, I suspect this would have been much better off serving as purely a temp track in the rough cut for a new piece of score rather than being used outright in the movie. Of course, for people who are unfamiliar with We Are The Night or, indeed, the music group in question, then this may not have the same effect on certain members of the audience. I’m not in a position to be able to guess at that one.

All in all, Blood Of My Blood is a pretty good movie. It doesn’t spoon feed the audience and it leaves little puzzles and mysteries of the characters to play out in the mind after the movie is done. For me, for instance, a scene involving the throwing of a second cloister key onto the river bed may be concealing more interesting truths about the two characters than my brain was divulging to me on this first viewing. This is always a good thing but I’m not sure, to be honest, if this is a film I’d want to watch again. It is, however, a bit of a rare gem and the performances of the actors and the great, almost larger than life characters they conjure up here, are quite watchable and interesting. Most people should have a fairly good time with this movie, I think. Not exactly unmissable but certainly a rewarding film if you have the time and if, indeed, it gets any kind of release in this country at some point.