Doctor Who - The Girl Who Died 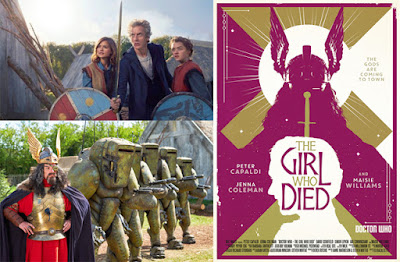 And The Horse They Odin On

So episode five of the current series, much to my surprise, is another first rate episode. It’s technically another two parter and indeed the story should continue, in a way, next week... just with a different set of characters and locations, aside from the one important supporting character, it would seem... The Girl Who Died.

It’s a very simple story and it’s one which leaves The Doctor and Clara in a situation where all they have to help them are their wits and The Doctor’s special MacGyver powers to make the most out of the various things you can find in a small viking village in order to save the day. This time it comes at a price, the consequences of which will doubtless be explored in the next episode following on from this... The Woman Who Lived.

So, yeah, this episode starts with the tail end of an off screen adventure where The Doctor wards off an entire battle fleet while simultaneously rescuing a stranded Clara in space before the brain eating spider working its way up her costume can have her for dinner. All well and good but when the two stop for a quick breather, to catch up on what just happened and the limits of their allowed involvement, they are back in viking times and promptly captured by a band of the said fellows who take them back to their village. Two things to note is that they are now two days by boat from the TARDIS and, hooray, The Doctor’s sonic sunglasses are snapped in half and, though they do make use of them still... well, let’s just hope that he doesn’t make any new ones anytime soon and he can get a new screwdriver manufactured by the TARDIS before the next episode comes into play.

The story gets underway properly when a species of aliens, the leader of whom represents himself as Odin and projects his image into the sky, culls the village of all its fighters, effectively making them into a protein shake to drink, and then accepts a challenge by the title character of this story to come back the next day and fight the warriors. That is to say, they’ll come back and slaughter the rest of the village the next day. So immediately, The Doctor and Clara are put into a Seven Samurai kind of situation (or The Magnificent Seven, if that’s you’re preferred pop cultural reference here) and have to train up the remaining villagers to fight... even though they realise it will be futile.

Of course, before the episode is over, The Doctor manages to MacGyver some stuff up from the local blacksmith’s forge and, using handy electric eels, helps the locals defeat the alien menace. However, the price is the death of the girl who challenged the alien race in the first place. And this is where it gets really interesting in terms of continuity with the series because The Doctor finds a way to save her too... but the reasons he does this are a neat fix on something which may have been bothering a minority of the viewers of the show for a while.

You see, Doctor Who is a big and long running show here in the UK. Pretty much most British actors have a role in it at some point or another and many of them return again for different and, quite often, more famous or longer lasting roles over the 52 year history of the show. Nicholas Courtney, for example, played a recurring character in a long story in the William Hartnell years before returning in Patrick Troughton’s era as Colonel Lethbridge-Stuart, who was soon to be promoted to Brigadier Lethbridge-Stuart and who worked with quite a few of The Doctor’s over the years before his death a few years ago. Similarly, future Doctor Colin Baker starred in a minor role in a story in the show years before. The second incarnation of the time lord companion Romana regenerated into a character she liked from the previous series, naturally played by the same actress. So there is a precedent for this in the show and that last example is a pertinent one here because the writers acknowledged the actress' likeness in the story and came up with a justification for it...

Now Peter Capaldi is no stranger to the Doctor Who universe. He played a major role in the third series of Torchwood and, more importantly here, played a great character in the David Tennant story The Fires Of Pompeii. The Doctor acknowledged in the first proper Peter Capaldi story that he recognised the face from somewhere and wondered why his body had chosen it... with a few careful and quick flashbacks to both of those stories we now have the reason for The Doctor’s face being the same as one which occurred in the earlier episode used here... as a reminder that sometimes you don’t always have to leave people behind. Which is possibly unnecessary but it’s certainly a nice touch.

The episode is loaded with references to other pop culture references too... from It Ain’t Half Hot Mum to Noggin The Nog and the writer certainly must have had a lot of fun with this one. The story is pretty cool in its own right too and the simplicity of stripping away the technology and throwing The Doctor in at the deep end to manufacture the tech and use what he’s got to ‘capture’ upgraded technology both works really well and gives the characters a chance to shine in a simpler environment. There’s some really nice character building going on here, not least of which is shown in the way The Doctor saves the girl who died. Reprogramming an alien field kit he heals her back to life after death but... there’s a catch. The field kit absorbed in her body will never stop repairing her. She won’t age and won’t die ever... or so we’re told. And we learn, or are reminded (to be more accurate) of The Doctor’s regret about him outliving all his friends when he leaves her with a second reprogrammed field kit... so when she meets the person she wants to share the curse of immortality with, she has the power to make it happen.

That being said, I don’t think things will quite play out that way. I think next week we’ll find that there is another option to immortality and that the second field kit may well go unused. We shall see what we shall see and I’m kinda hoping I’m wrong on that count. So fingers crossed.

All in all though, The Girl Who Died is probably the best episode of the current series so far, which is saying a lot since even the slight duds have been pretty good episodes. Entertaining, well performed, more than adequate special effects, the reminder of The Doctor’s ability to ‘speak baby’ and, to top it off, maybe even a little thought provoking. Can’t ask for much more than all that on a Saturday evening science fiction TV show I reckon. Good job all around. Will be interesting to see where the next part of this story takes us.
Posted by NUTS4R2 at 11:21