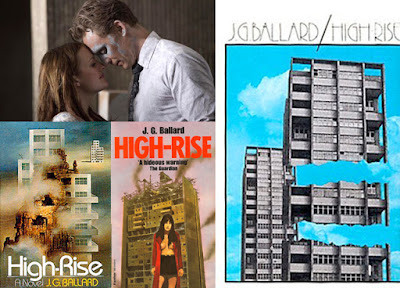 Hmmm... I’ve only seen two of Ben Wheatley’s films prior to this one but I would still call myself an admirer of the director’s work based on the experience of those two alone; Kill List (reviewed here) and Sightseers (reviewed here). Now I’ve not read J. G. Ballard’s original novel of the same name, on which High-Rise is based, so the usual caveats apply to me being able to say anything even remotely intelligent on its status as a good or bad adaptation of the work in question. For what it’s worth, I’m told this is very close to the source novel.

Ben Wheatley, however, is essentially, someone who I see as an overtly ‘British’ director and although the writer is also, of course, English, Wheatley would not be my first thought when it comes to being a person to direct something based on one of Ballard’s works, to be quite honest. Then again, the only novel I’ve ever got around to reading by Ballard was my old, battered, 1960s edition of Crash (asides from some of his old New Worlds short stories) and so... I’m also less well informed in that quarter too.

All that being said, what I am able to say is that Wheatley does a very interesting job with subject matter which I’m guessing is a little difficult to translate into a visual milieu in the first place. Amy Jump, who adapted this for Wheatley, has therefore done a spot on job in terms of giving the director something less abstract to work with... although the film does have its moments so I can only assume these are appropriate responses to certain passages in the source text.

Now, I have to be honest here and say that I wasn’t particularly entertained or impressed with this movie... at least not nearly as impressed as I was with those other two films I saw by this director. That being said, you have to admire someone who can depict the kind of moral decline of those living at different levels of a futuristic tower block and have it still mostly making sense by the time you come out of the other end of it. I say mostly because there were, for me, and I may be at fault here if I wasn’t processing the amount of rich visual and audio data on offer in this film quick enough, some instances where the narrative either jumped or expected you to take a leap of faith in terms of the time frame and what good old Ballard contemporary Michael Moorcock would probably have referred to as... “the speed of the collapse”.

In terms of linear storytelling, we have a fairly standard, almost 'Lord Of The Flies' style decay taking place at pretty much all levels of the social structure in the High-Rise block in question, with the people at the top of the tower occupying the uppermost rung of the class society and the lowest of the low nearer to ground level. All well and good and, as you’d expect, by the end of the film, when the moral entropy has pulled everyone down to the same level of destructive mayhem and survival... I felt myself popping out of the movie and asking why the heck the world outside hadn’t moved in on the tower block and brought everything back to order. Bunuel, for example, could get away without those kinds of questions being asked in something like, say, The Exterminating Angel (reviewed here), because the dream-like parameters of the prison that the house party becomes in that movie is fairly self contained and less like something which could have a genuine echo in real life, it seems to me. This film didn’t generate that same kind of easy negation to the logic of the events taking place and so I was fairly baffled at the exclusion of the view of the outside world looking in at the chaos.

To be fair, Jeremy Irons character of the 'architect' of the structure, occupying the uppermost rung of the tower, is seen to be deliberately keeping the police at bay in his own pacificistic manner at one point in the narrative but... the amount of anarchic destruction, loss of human life and generally appalling survival tactics going on in the building by this point did lead me to question just why the heck would he do that, after everything that has taken place. I also found myself questioning just what had happened to the job that the central character, Dr. Laing (played very nicely by Tom Hiddleston), has in his real life because a lot of the time it was hard to tell if he was actually getting into work or not, by the end of the picture. One guesses not since he decides to set up a private practice within the confines of the tower block but... I dunno... I’m guessing that there was maybe a fair amount of footage cut out of the final version and something had to give.

Another thing I was disappointed with, to a certain extent, was that the movie didn’t really seem to go far enough in its portrayal of the descent into a barbarism which had the potential to be quite a bit more unsettling, it seemed to me. For instance, when a character played by the always brilliant James Purefoy helped to deliver the baby of a woman who his clique of barbaric, upper class toffs had kidnapped earlier in the film... I initially assumed it was because the baby might seem to them to be a more viable source of nourishment than the horses and dogs they’d begun to have to eat by this time in the picture... but unless some footage was cut out here, this doesn’t seem to be the case. One wonders why, then, when human life has become such a cheap, throwaway commodity at this stage, they are even bothering to help out at all. However, this may not be Wheatley and Jump’s fault here... it may be that in order to stick to Ballard’s vision of the story (if story is the right word to use here... possibly not) then the writer and director may have decided to tone down the level of this particular circle of hell in order to be a closer adaptation of the source.

So, yeah, perhaps I was just a little underwhelmed by it but there’s also a lot to like in this movie such as a moment when Tom Hiddleston’s character goes into a dream and he’s walking down a corridor with some air hostesses, breaking into some dance moves in slow motion. Scenes like that were getting a good reaction from the audience and even I broke my deathly, emotional pallor and chuckled at that one. I also was quite thrown by the scoring which seems to be a mixture of Clint Mansell, source songs and some tracked in music library cues at certain moments. It all seemed a bit uneven and some of the scoring choices really seemed to make less than perfect sense but... it does keep the film interesting and is almost used, in some scenes, to create a juxtaposition of two different emotional hits of opposite moods conveyed by the music and image... which is as valid and oft used a technique as any other I can think of in the history of cinema... it certainly gives one pause for thought during certain sequences of this movie.

Another incredible scene utilising sound, rather than music, occurs after a character called Richard Wilder, played absolutely astonishingly by an actor called Luke Evans, starts repeating and then screaming his name into a tape recorder, his language slowly deteriorating until we are left with just snarling rage and loss of identity. Then, when a person comes in and questions him later, as he lays beneath a table, as an answer to the questions he starts and stops the playback at the correct moments and a raging torrent of incomprehensible vocals are his answers. This was pretty neat.

The film is a heady mixture of brilliant performance from the likes of Irons, Hiddleston, Purefoy, Evans, Sienna Miller, Elizabeth Moss and Keely Hawes, coupled with some nice tracking shots, beautiful editing and, although I noticed rather a lot of zoom shots, the director seems to make even these work within the mix too. I’m wondering if the style of a camerawork was another 1970s homage, being that we have a future conceived of in the 1970s by Ballard and manifesting itself here, distilled by Wheatley through a retro filter to channel that atmosphere.

The Q and A at the end of the screening with both Ben Wheatley and Tom Hiddleston was kinda interesting and it certainly showed the passion and enthusiasm that these two men shared for the subject matter which they’d collaborated on. Hiddleston even read out a part of an old J. G. Ballard interview to the audience to show just how prophetic the author was and, yeah, I think that when you have that kind of belief in a project, the good work is going to shine through in the final product... whether you like that final product or not.

At the end of the day, High-Rise really isn't a bad film. It’s actually a pretty well made movie... which I’m guessing some will find far more challenging than the usual fare on show at their local cinemas. As far as I’m concerned, although I did appreciate it, I think it’s just not my cup o’ tea. Like the time I saw Trainspotting on the release of that movie, I just felt this one was another film where I’ve seen it all before... but then I am getting to be a bit of an old geezah, so that’s not necessarily a good yardstick for whether you, the reader here, will enjoy ot or not. Even though, unlike Wheatley’s other films, this is not a repeat view movie for me, I can recommend that it’s almost certainly going to be a most interesting night at the cinema in comparison to a lot of the other movies coming out in April, which is when this movie is scheduled to be released in the UK, as ar as I can make out. So you might want to make a note of this one in your diaries because... I suspect it will be, at the very least, much talked about when it hits the cinema circuit proper.
Posted by NUTS4R2 at 18:57