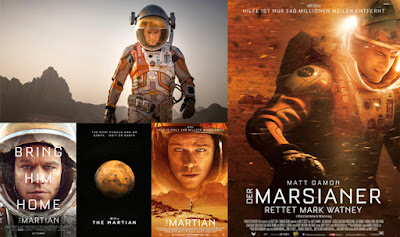 Okay... the first thing you need to know about me if you’re going to read this review is that I’ve never read Andy Weir’s bestselling novel The Martian, on which this film is based. Therefore, I really can’t give you any idea of how good an adaptation this movie is of the source material, which, with someone like Ridley Scott at the helm, could go either way (I still refuse to watch Hannibal after what he apparently did to it). What I can do, though, is review this purely on its own terms as a personal cinematic experience... which is all a production team would possibly want from a review, I would think.

Ridley Scott used to be my favourite director for a little while, back in the mid-1980s. He directed two of my favourite films, in fact. Firstly, the original ALIEN, the first theatrical release cut of which I would still claim is the best of any of the movies to make use of the titular creature created for it by H. R. Giger. Secondly, he directed what has, since I first saw it as a teenager in 1982 at my local cinema, been my favourite movie of all time (maybe tying in first place with The Third Man). That film being the original cut of Blade Runner (reviewed here)... one of the most moving and spectacular modern noirs I can think of.

Unfortunately he's also let me down quite a bit over the years. The Hannibal debacle was just the start. He also delivered a ‘director’s cut’ of his original ALIEN which, while restoring sequences we all wanted to see, also trimmed footage from the whole experience and sped the film up somewhat needlessly, Scott citing the way audiences change and digest visual information to be the prime motivator in his decisions on that one (if I remember the interviews correctly about that at the time). Similarly, we now have something like five different versions of Blade Runner but, still by far the best, is the one which Criterion put out on laserdisc (now on the latest Blu Rays and DVD box set presentations of the movie) which was a less censored version of the original theatrical release.

So when it comes to Scott I have a lot to gripe about in terms of what he’s done to what were my favourite movies of his, not to mention the abomination of Prometheus... but that’s another story and I reviewed that one here.  The fact that he's about to 'prometheus up' a sequel to Blade Runner is the final nail in the coffin of good taste, it seems to me.

However, he’s visually brilliant, no matter what choices he makes, and since cinema is at least 50% reliant on the visual aspect (I would say) then you can’t deny that the man is a bit of a film making genius... whether you agree with his decisions or not. So I went into The Martian with open eyes and a desire to be impressed because I like science fiction and, also, I quite like Matt Damon as an actor/personality... so, yeah, I thought I’d give it a go.

What we have here is a film about an astronaut left for dead and stranded on Mars with roughly no chance of survival. He then sets about trying to beat all the odds to try and a) survive, b) communicate with his NASA colleagues on Earth and, c) organise some kind of plausible rescue in the kind of time window he has left before the inevitable stranglehold of approaching death comes to claim him.

And you know what? It’s a pretty good film.

Having a likeable celebrity like Matt Damon in the lead role certainly helps lift this and, luckily, he is supported by an absolutely astonishing cast of cool actors such as Jessica Chastain, Jeff Daniels, Sean Bean, Michael Peña and Chiwetel Ejiofor... not to mention a load of lesser known actors (to me, at least) who all knock it out of the park when it comes to performance. That is to say, like the best science fiction, the acting makes everything completely credible and, with a plot like this, where credibility isn’t so much of an issue due to the implied scientific know how... everything seems totally convincing in this movie. Even the bits which might not be quite as scientifically accurate as you might hope or expect.

Scott doesn’t direct this in the same way as the earlier movies that I best remember of his (The Duelists, Alien, Blade Runner, Legend or Someone to Watch Over Me, for example) and I was expecting the movie to be full of extremely long, slow pans and a very specific kind of lighting style which I didn’t see once. Instead, we have a way of shooting, or at least editing, which splits things up into smaller cells of time. Now don’t get me wrong here... this isn’t cut/cut/cut for the MTV generation kind of filmmaking... but it is a heck of a lot pacier and it struck me that Scott has done a clever thing here...

What he seems to be doing is splitting up the Matt Damon scenes of isolation and shooting them from different viewpoints and sources in order to somehow pacify the sense of isolation for the character. The director could very easily have gone down a Mr. Forbush and the Penguins kind of route (reviewed here) with the way in which he shot the lead actor but, instead, he goes from maybe a close up or slow pan to a different view as seen from a monitor... or on another kind of visual source. And quite a lot of the action deliberately takes us away from Damon and shows it all from the point of view of either the people on Earth or Damon’s colleagues, who are on their way back home. Though this is possibly dictated by the content of the novel (and like I said, I really don’t know)... the writer and director could easily have gone for a version of the movie which stays with the title character a lot more and gets information from other sources communicated in a different way than it is here. So it’s an artistic choice and I think either way could have worked very well and got us two completely different looking movies.

Scott’s gone this way and it seems to work really well.

The other thing we have here is a movie with no real central antagonist. Okay, yeah, it could be argued that Jeff Daniels character fulfils that role to a certain degree... almost by default because he’s the one who has to make a lot of tough decisions. However, this is more a disaster movie in the aspect that most people are all there pulling for each other (including Daniels) and this does tend to give the movie a strangely unexpected feel good factor. This is not a downbeat film by any means and, I think, Scott has chosen not to emphasise the chronic sense of danger in the way he’s shot this movie...

For instance, when Damon’s title character, Mark Watney, accidentally blows himself up while he is trying to find a way to manufacture water to grow potatoes for food, it’s played mostly for comedy and the moment the calamity happens is almost slapstick in the way it is timed and staged. It certainly got a huge laugh from the audience I was with at my local cinema. Sure, we are aware of the consequences but they’re downplayed to an extent where we can watch the drama unfold without taking things too dryly. Now that’s possibly not the most appropriate decision but it’s certainly a solid artistic decision and, whether you agree with it or not, you have to give the moviemakers some credit for taking a less expected route.

At the end of the day, The Martian is a surprisingly strong 'feel good' movie. I certainly wasn’t expecting that from someone like Ridley Scott, who is certainly no stranger at portraying ‘the black dog’ on film... but it’s certainly what I got. It’s maybe not as bleak or as effective in the sense of filling the audience with the appropriate amount of terror that such a situation presents us with but it’s extremely watchable and a real fun trip of a movie. Perhaps not a complete masterpiece but certainly a fine work of art from a great British director... so give this one a go if you like plausible science fiction wrapped up in an addictive little package of a movie. Not one you’d want to miss having an opinion on, methinks.
Posted by NUTS4R2 at 18:47