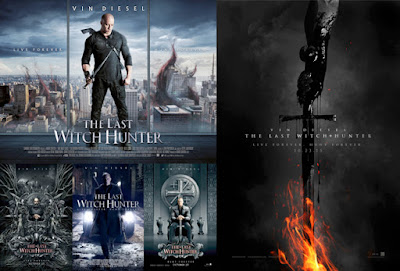 A Witch In Time

I’m not a big Vin Diesel fan, it has to be said. I’ve seen him in a few things like Pitch Black and XXX and, although I thought the former of these two was an okay movie, I wasn’t all that impressed, at the time, with the main male lead, who I thought was a bit wooden. That being said, I also wouldn’t go out of my way not to see a movie with Vin Diesel in it... it’s just he tends to make films I wouldn’t usually choose to pass time with at the cinema. So when I saw a trailer for The Last Witch Hunter at my local a few weeks ago it looked kinda interesting to me... silly, but interesting. So I thought I’d take a look.

I’m kinda glad I did because, you know what, Vin Diesel is a bit wooden but, looking at the confidence and ease with which he is able to deliver lines against seasoned actors like Michael Caine and fill the expectations of the role in this movie, I’m giving him a long hard look now and thinking he maybe does this on purpose. It’s part of his on-screen personae in very much the same way that John Wayne used to cultivate a certain style of character when he could actually have been a lot more versatile than that if he wanted to be. I think Vin does alright in this movie and I’m gonna start looking out for him in other films at the cinema... if they take my interest.

The film itself is... well it’s a mixed bag when it comes to the style in which it’s been shot, marrying up hand held, slightly jerky shots to sprawling camera pans and then relying on the editing, which is skilled enough to just about make it all work. The story is great though and the impression you get of it from the trailer is totally accurate. It’s silly but fun... and those movies tend to occupy a large place in people’s hearts because escapist adventure tends to be pretty good when it does what it says on the tin... and this is no exception.

The film follows the adventures of Vin Diesel as a witch hunter called Kaulder, aided by his friend Dolan the 36th, played by Michael Caine, the latest of many ‘Dolans’ through the ages since Kaulder’s death and rebirth through a witch’s curse. Kaulder and Dolan are part of an organisation that makes sure witches through the centuries are kept on the straight and narrow to comply with the world’s laws that witches are not allowed to harm humans. Kaulder is that secret society’s blunt instrument, weapon of choice against any witches who stray out of line. However, when Dolan the 36th retires and is replaced by Elijah Wood as Dolan the 37th, that former Dolan is found ostensibly dead on the same day and black magic is obviously involved. This leads Kaulder and Dolan the 37th into a plot to rebirth the evil witch queen who cursed Kaulder with immortality over 800 years ago.

On the way, he finds himself flung in with a young witch called Chloe, played by the lovely Rose Leslie, who does the whole dynamic of not trusting The Last Witch Hunter through to risking her life on his behalf... and a heck of a lot of magic and battles in the quest to try and prevent the witch queen and her evil plot. Along the way there are betrayals of one kind or another and revelations about the central character, which is a key part of the jigsaw puzzle of the trick to defeating the queen at the end of the movie.

Now, I have to say, there was one surprise fairly early on in the movie which I didn’t see coming but, for the most part, the script is full of clichés and pretty much every twist and turn telegraphs itself way before it manifests on screen... but that’s okay because sometimes a cast and crew can get away with that kind of writing, especially in a fantasy action genre like this where the characters are themselves of greater interest than any plot that they are thrown into. And everyone does fine here... the acting is all pretty good and the writing, while not throwing too much originality at your brain, does succeed in writing interesting character types to go along on the adventure with.

It also helps that it’s a fairly solidly made movie and the set pieces, such as they are, are handled well, are mostly exciting (although the final battle sequence does tend to go on a bit, it has to be said) and the editing doesn’t get in the way of decoding and understanding the action sequences like it does in a lot of Hollywood blockbusters. I was pretty much entertained all the way through and that’s no mean feat with this kind of movie, to be sure.

I love films which are pretty much monster hunter movies like this so The Last Witch Hunter is right up my street. I was looking at a father and his two kids in the row in front of me and they seemed to be lapping it up too. I was looking them and thinking that, for these kids, this is the modern day equivalent of those old Ray Harryhausen stop motion action adventures that I used to watch as a young 'un in the 1970s. It took me right back, in a way. It also reminded me a little of the old Hammer and Amicus movies of the 1950s, 1960s and 1970s too. Not in look, because pretty much every set and shot in this movie is enhanced with an abundance of CGI set dressing comprising special effects and such like, but in that this is just the kind of film that studios like those would have liked to have been making back then... if they’d have had the monstrous budget at their disposal back then to credibly create some of the magical creations in stories of this kind... which they wouldn’t have.

To be honest, I’d like to see more movies with this of monster hunter theme to them at the cinema. I loved films like Van Helsing and even the completely inaccurate to the source material but still quite fun Constantine, to be honest, and this film definitely follows in the footsteps of movies like these. There’s really nothing wildly new or different about this one at all but, it is convincingly put together and makes up for the lack of shining originality by being really on the nose when it comes to setting up a credible world and not deviating from that vision.

Steve Jablonsky’s score is okay too. Certainly appropriate although, again, I didn’t think it maybe went far enough to stress the dark, twisted bleakness of some of the characters in some places. Some more experimental orchestration might not have gone amiss, I think. Don’t get me wrong, it’s a lovely score and I bet it’s a great listen away from the movie (which is why the CD is going straight onto my Christmas list) but I did feel, in some places, that it sounded perhaps just a little too much like every other American fantasy movie out there. With a character like Kaulder, who is living on the edges of our reality and on the outskirts of a plain of existence where witches and demons gather at the periphery of mankind, I thought that it was just a little mediocre in certain places. That being said, I’m really not sure the composer can be blamed for that because the film has one of those noisy sound mixes where a lot of the time the music is dialled back in contrast to the various action sound effects which take centre stage in the audio range of the film.

Still, it serves the movie admirably and it’s really not a complaint. The Last Witch Hunter is, as I’m sure you’ve guessed if you’ve seen the trailer, not a frightening movie and I suspect it’s not supposed to be. It is a fun, action romp tinted with horror film trappings and filtered through generations of movie and literary characters who have sought to fight with demons and witches to keep the world safe. Vin Diesel’s Kaulder is one such character and the actors here do so well that I would love to see a sequel to this sometime. Not really expecting that to happen but, hey, I enjoyed it and I can imagine it will be a Christmas holiday favourite on TV in many households in years to come. Not essential viewing by any means but a solid, fun action movie that should satisfy most lovers of that kind of combination genre. One to watch out for, if you have the time.
Posted by NUTS4R2 at 19:34