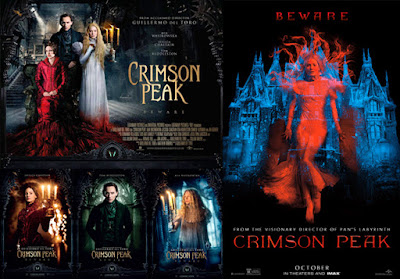 Warning: Slight spoilers in this one
in terms of the first half of the movie.

Well... this one surprised me by completely living up to my expectations of it... which were unrealistically high, it has to be said.

I first saw the trailer for Crimson Peak online, either at the end of 2014 or early 2015, if my memory is not playing tricks on me. I admire Guillermo del Toro as a director but find him a bit hit and miss when it comes to making movies which are able to entertain me. Films like Pan’s Labyrinth which, with its surrealistic fairytale leanings, should have been right up my street... left me a little cold, to be honest. Whereas stuff like the Hellboy movies (especially the second one) and Pacific Rim, to a certain extent  (reviewed by me here), are films I could happily repeat watch. However, even the films I find less than entertaining by him are always worth a look because they are usually so arresting at a visual level. Crimson Peak is no exception but, I’m happy to say, it’s also wildly entertaining and, frankly, a bit of a masterpiece of modern Gothic romance.

Now, I’m pretty sure I read a tweet by del Toro saying that the film is not a horror movie. Well, I guess it depends on your definition of horror. For me, anything with non-human monsters - be they off-planet, other-wordly or supernatural phenomena, falls firmly into the horror movie camp for me... and the presence of a handful of ghosts in this film certainly does the trick here. However, the horror details are really the icing on the cake of this delicious crimson confection... the movie is both more than that, and less than that, in equal parts... depending on your point of view.

More than that because they support what is basically a contemporary take on an old school gothic romance, a film firmly following a direct lineage of movie versions of such works as Charlotte Brontë’s Jane Eyre or Daphne DuMaurier’s Rebecca. Less, because the movie is more about the characters and their relation to their situation rather than a full on ghost movie... although this really isn’t to suggest the movie is anything less than scary in certain sections. What we have here is the style of those kinds of earlier literary works infused with a quite chilling rendition, due to del Toro’s very good taste at getting things to look and feel right, of the kind of modern incarnations of ghost horror movies such as Mama (reviewed here) and Dark Water.

The film follows a young lady called Edith Cushing, played by Mia Wasikowska, as she finds herself in an unlikely romantic entanglement with her former Only Lovers Left Alive (reviewed here) co-star Tom Hiddleston as Thomas Sharpe and his sinister sister Lucille Sharpe, played by Jessica Chastain. After the violent murder of her rich father by an unseen assailant, she and her money return with the Sharpes to live with them in England, to his ancestral home which... as Edith finds out far too late (certainly much later than anyone in the audience would expect, given that Tom starts talking to her father and his colleagues about red clay)... is known by the locals under the nickname Crimson Peak. This is a place she has been warned of, by her dead mother, and told to stay away from... so obviously there wouldn’t be a story here unless she ended up at this place at some point in the film’s running time. Her biggest concern... and the audiences... is to try and figure out just who or what is there that may mean her harm. Is it the ghosts of the violently deceased that plague her in the night or are either Tom or Jessica less transparent in their intentions than they are letting on?

Well, I’ll tell you now you probably won’t take too much time seeing through the various clues, highlighted in the cinematic equivalent of a giant marker pen on paper... but the mystery element in the story should keep some people happy and it’s not the story, anyway, which makes this film such compelling viewing. It’s del Toro’s deft touch and signature on the frames themselves which will have you riveted to see what beautiful set piece is coming next. There is high romance (a lit candle for a waltz scene), lurking terror (the entire environment Edith ends up in) and there’s also the terrifyingly rendered ghosts in the movie... I promise you, you would not want to meet one of these creations on a dark night. Above all though, there’s also a deep and lacerating sense of violence which boils up when, admittedly, you most suspect it but... honestly... with a certain visceral force that leaves you with a schism in your head as you try to marry up the contrast between rich, romantic gothic atmosphere and the viciousness and goriness of an expression of violence in which del Toro certainly doesn’t pull any punches.

It’s a terrible cliché for me to write in a review but the film truly is a rich, visual and, also, aural feast - the sound design is beautiful with whispers of dread and terror lurking in your ears as you follow the characters through the old house on Crimson Peak. This is, of course, exactly what I would expect of the director and his artistic sensibilities. He has apparently gone on record as saying that the design of the film was his attempt to recreate the look of Mario Bava. Now, as regular readers will know, I cite Bava’s influence in films a lot but I wouldn’t have necessarily highlighted that here unless prompted by the director’s own words. What I will say is that I was much more struck by the film’s resemblance, on some visual level, to the mid 1950s to late 1960s horror movies put out by England’s Hammer studios. The dense colours don’t quite seem to be as luminous as one might expect to encounter in the works of Bava, to my mind, and more like what you would see in a Christopher Lee Dracula movie, for instance (my review of the first Hammer Dracula can be found here). Indeed, the fact that Mia Wasikowska’s main protagonist is presumably named after one of Hammer’s best loved actors, Peter Cushing, presumably demonstrates that these films were also in the director’s mind when he was working on this film.

Either way, Hammer and Bava are not the only references for horror or, indeed, giallo fans to sink their teeth into. For example, the murder of Edith’s father is straight out of a Dario Argento giallo... in fact, I suspect it’s inspired by a murder scene in Profondo Rosso (aka Deep Red, reviewed by me here) but the director really manages to up the stakes and make the violence in this particular scene, among others, something you almost want to look away from. Which, frankly, is what violence should be... something you really want to look away from. The director uses the brutality of the violence to punctuate certain scenes, especially in the last reel, and really hits home that the characters populating the story, no matter how beautiful they all look in his perfect shot compositions and framed within his leisurely moving camera, are very much real people with a lot at risk. It helps add to the gravitas already conjured up by the three main leads and Charlie Hunnam’s character, who becomes more important toward the end. I’m happy to say that the ‘deus ex machina’ arc of Hunnam's character doesn’t necessarily follow the exact path the audience thinks it’s going to... and he's not very smart in some scenes, it has to be said.

Del Toro’s Crimson Peak is an absolutely beautiful film and it’s steeped in the gothic tradition of the literature of over a hundred years ago, filtered in a deliberately post-modern fashion through some of the best directors of colourful horror films of the past but, at no times, does it ever stop from being the unique and personal vision that you would expect from this Mexican master of cinema. Guillermo del Toro is one of the absolute key modern players of what is still the most popular art form of our time... the motion picture. Crimson Peak is, I will say again, a masterpiece and, from my view at this stage of his career, one of his key films.... certainly my favourite so far of all his works. Great beauty for fans of gothic romance and tales of ghostly spirits bearing warnings from the dead. Definitely one you should catch up with and see on a big screen. Such a beautiful film.
Posted by NUTS4R2 at 19:36