Doctor Who - The Woman Who Lived 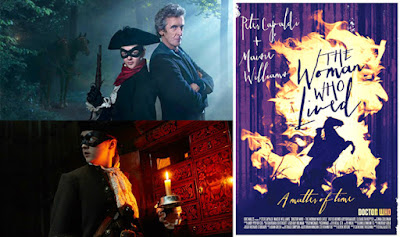 Okay, so this was pretty good but... I’m guessing it might not be a crowd pleaser. Not for the younger audience because there’s not really much in the way of action in this one... just sparklingly well written dialogue. And I suspect the very dark tone of this, while ideal for a viewer like me, to some degree, will probably put off some people... but time will tell on that one.

As for me... I thought this follow up episode, The Woman Who Lived, was absolutely marvellous and explored the anxieties and consequences, touched on by The Doctor when he brought The Girl Who Died back to life, in an absolutely beautiful manner. It gets very dark but not quite as dark as it could have got and the avenues it explores and the end game of the episode actually did surprise me to a certain extent. Which is good because I was sure it wasn’t an option the writers would even consider being on the table for this and, although it might seem a bit hum drum and a bit of a quick fix solution... I think it was handled, both in the writing and the performance, in as eloquent a way as possible.

The episode wisely ditched Clara for almost the entire running time, to give the relationship between The Doctor and the titular character, Ashildr, to play out in as much time as was needed to explore the themes and throw in the odd comic sequence for light relief. The episode also delivered just the right touch with Clara too because the longevity of The Doctor’s companions and the way in which they are left behind is something which is again thrown up as an element which we can now see in a different light... after a conversation which happens towards the end of this episode. Clara unwittingly brings closure to the conversation, even though she has no way of knowing what she’s doing and it makes for a really touching conclusion to the story.

I have to give a big shout out to Maisie Williams as Ashildr. She was pretty good last week but this week, playing someone who had been made bitter and numb to life due to the passage of, and emotional ravages of, time... well she was just astonishing. Given that the episode only lasted 45 minutes, she managed to convey all the bitterness and dissilusion turned into a more cavalier way of looking at life in a kind of shorthand way that was totally effective and I was so impressed by the depth of her exploration. She, like Jenna Coleman is able to do regularly, kept up with Peter Capaldi, who is frankly brillliant, and gave him a run for his money on screen. What a treat to see amazing writing performed so well on a weekly basis. We’re halfway through the series now (they chopped it down by yet another episode this year and are counting the Christmas special as this year’s thriteenth episode) and I have to concur that somehow the writers and show runner Steven Moffat have really been able to turn the show around. This is quality stuff here... but I’m still cynical enough to expect the inevitable fail at some point soon. Hope not but... yeah, I’m a little jaded myself.

Congratulations too, should go to Rufus Hound, who only had a few scenes to make me care enough about him as a character that the final end game solution of the storyline here finally looked like it was obviously the inevitable choice to take. I won’t spoil it here by saying what that was but... although, as I said, a bit of a hum drum option to stear the plot threads too, Hound’s performance as highwayman Sam Swift was one which stood up and delivered a means to at least make that final choice by the titular character an acceptable one. So that helps a lot.

There were some nice references to The Doctor’s past adventures here too, with a conversation including the Great Plague and the Great Fire of London implicitly naming the Terrileptils as the creatures who started the fire in Pudding Lane... as seen in the Peter Davison era story from the 1980’s, The Visitation. Captain Jack Harkness also gets a big shout out... which I’m sure a lot of people will be happy about. Of course, the sonic sunglasses also made a most unwelcome return... so there was something really bad about the episode. Maybe we can get that fixed somehow though? I understand there’s an on-line petition. Is Moffat just teasing us with this thing or does he mean to keep the sunglasses in? This really isn’t a good idea.

One last thing... Murray Gold’s score was absolutely brilliant... asides from a little ‘comedy romp’ music in a break-in scene perhaps. Truly beautiful with some nice, haunting piano work for a scene with Ashildr at the end and a nice little, light touch rendition of Clara’s theme too, all helped the episode weave its magical spell. Another short review but in terms of incident, the episode was fairly simplistic and the locations were not all that many... plus I really don’t have anything to complain about again so... sorry if you’re feeling short changed on the size of this one but I don’t have much else to say about this, other than it’s another one of the stronger episodes of the last five years. Looking forward to next week and seeing if that episode is set before or after one of the semi-regular characters was killed off at the end of last year and, also, whether this will lead on to The Doctor rediscovering Gallifrey or not. Time will tell so... another Doctor Who review next weekend, methinks.
Posted by NUTS4R2 at 09:51