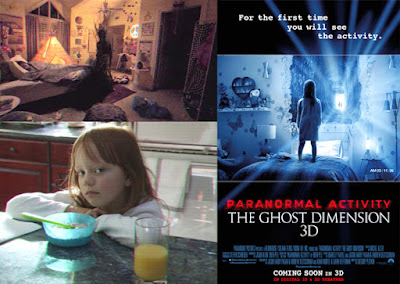 Regular readers will know that I have a soft spot for the Paranormal Activity films. The first of these (reviewed here) was not really all that scary but fits into my realm of 'comfort horror'. Paranormal Activity 2 - 4 (reviewed here, here and here)  were pretty scary and, as each new film was released, they added another compelling puzzle piece to an overall  back story arc that has been used to drive the franchise on, pretty successfully, since the first installment. At this point I should probably point out that I don’t include the original sequel to the first Paranormal Activity film, the Japanese horror movie Paranormal Activity 2 - Tokyo Nights because, amazingly, the producers have done a really good job at suppressing a release of that, now unofficial, sequel over here or in the US and I still haven’t been able to get my hands on a copy with English subtitles. it follows a completely different plot avenue from the US Paranormal Activity 2 and I really want to see what the Japanese did with it. I shall keep looking out for it though.

The US films are not set in a chronological order but, as the story unfolds, you realise that there's a good reason why this is so, especially with the inclusion in the fifth installment, the dreadful Paranormal Activity - The Marked Ones (reviewed here) of the concept that various characters in the Paranormal Activity universe can travel back and forth in time. Now this is interesting because, as far as I can remember, the release of Paranormal Activity - The Ghost Dimension was stalled for a couple of years to make way for the shooting and release of The Marked Ones and it seems to me now that the only reason this could be so, was that test audiences (be they members of the public or part of private studio screenings back in 2013) may have been confused by the time travel element in this movie but, honestly, although I originally assumed that this was why that fifth film was needed, I can honestly say that you’d have to be... well...  really not very smart if you couldn’t work that out for yourself by the things which are happening in this one, since the film straddles mostly just two realities (or three if you count the titular plain of existence) - that of the year when Katie and her sister were taken in by ‘the coven’ in the past and also the current part of the story playing out, the year 2013... which gives me further circumstantial evidence that this was, at least in part but probably in whole, in the can by the original projected 2013 release date.

Now, the thing which was driving me nuts about this one before I went to see it was that it’s being presented in 3D. What the heck? Now you have to think about this. The movies are found footage horror films making use of whatever camera technology they are purportedly being recorded on... mostly VHS in this one because it includes the identity of the finders of the tapes which you saw being discovered in the opening of one of the former episodes... I forget which one. So how do you get away with justifying a 3D release of a Paranormal Activity film when the whole point of these things is they’re supposed to look like they are documentary style found footage recorded on the hoof?

Well, as it happens, I forgave them almost immediately because, like the majority of the series, this film brings in a slightly newer element which elevates proceedings just a little more than the last one and, in this one, it’s the discovery of a souped up camera which has twice as much innards as it’s supposed to have and which seems to have been specifically created to capture things happening in a spirit realm, invisible to the naked eye or a normal camera, superimposed over the real world images as they manifest themselves. So think shots of eerie ectoplasm beings appearing whenever the films ‘star demon’ Toby comes out to play, so to speak. So most of the footage in the movie is still flat but, whenever The Ghost Dimension starts manifesting whenever it’s this particular camera picking up the footage, the ghost parts are actually projected on a 3D layer... accompanied by some appropriate sound design to heighten the audiences awareness that something spooky is about to happen while simultaneously conditioning the audience, Pavlov style, that whenever they hear these sounds or see these ectoplasmic 3D black shapes... something awful could happen, so be afraid! Of course, all this would have gone down a lot better if it had made its original 2013 release date, when 3D hadn’t totally lost the popularity Hollywood wants it to have, in order to justify the ticket price hike but... at least the team behind the film have gone to some lengths to find a decent spin on the gimmick for this movie... which I think lets it off the hook somewhat.

It doesn’t hurt, either, that this is a real return to form for the series after that last, plug in installment. This one has a group of characters consisting of people who you really can sympathise with again and who you can hope make it through the film fairly unscathed... rather than the bunch of foul mouthed  street thugs you just don’t care about in The Marked Ones. Of course, I’m not going to tell you if everyone or, indeed, anyone survives this installment but... it’s a Paranormal Activity film. What do you think? You need to go find out.

The film is somewhat formulaic, it has to be said, following the slow burn format of the previous installments with the scares getting increasingly more alarming and violent as Toby and the gang ramp up to a finale where all hell breaks loose... almost literally in this case. There’s also a nice return, in this one, to the old Dennis Wheatley school of horror... which manifests itself when a local priest gets involved with the family and friends who are trying to protect their Toby-obsessed daughter. So, yeah, you get the old chalk symbol circle sequence where everybody has to stand in said circle and must not... whatever they hear or see... leave the circle which protects them from the demonic forces at work.

Okay... so how do you think that ones going to work out in a Paranormal Activity movie? Someone always leaves the circle of protection in a horror tale, right?

Let’s just say that the final confrontation between the priest and Toby, kickstarts the usual chaotic and scary concluding sequences of the film and, I have to tell you, the writers/producers/director goes way past the level they usually do at this point in these movies. You will, finally, get some good glimpses of Toby and the demonic deaths of any/all/some of the characters in this one (like I’m going to tell you) are all done in a much more over-the-top fashion which, in a lot of cases, makes full use of the 3D format. It possibly gets a little silly in this final pièce de résistance of the movie but it’s swings and roundabouts averaging out between the “blimey, that scared the pants off me, I did not expect that” moments and the “okay, 3D demonic impaling... whatever” moments and I can really forgive the film-makers any indulgences with the last quarter of an hour of this movie because it’s just so much scary fun.

The creator of the franchise, Oren Peli, has gone on record that this will be the last in the series but... hang on, you can’t stop it here! The final message we take away from this one is pretty grim and I really do want to see more of this franchise. I don’t think the story is done here and I would so much like to see a good guy/gal ‘anti-coven’ group of heroes go into a final showdown with Toby, the coven and, presumably, the devil made flesh etc. This is like where they left it at the end of The Last Exorcism Part 2 (reviewed by me here) and I was pumped up to see where the next one would go... which didn’t materialise. I want to see this series’ equivalent of the original Omen trilogy’s The Final Conflict (reviewed by me here) where there’s a huge showdown between the forces of darkness and light, over one or two movies. I don’t even care who wins... I just want to see it. I think this film needs to maybe make a heck of a lot of money and wipe out the bad box office of the unnecessary fifth installment to somehow give the studio a hand in reconsidering their options at this point.

The one thing that I found maybe dissapointing is that this is the first of the movies not to feature an adult version of the Katie character and played by the original actress. We certainly hear about what she’s been up to in 2013 and we certainly see a lot of her as a young ‘un... but no actual appearances in her adult guise in this one, I’m afraid to say. Which would have been a nice touch when all hell starts breaking loose in this one, I feel.

Regardless, my final words on Paranormal Activity - The Ghost Dimension are... this is another great entry into a seriously cool set of movies which actually make full use of the, possibly overused, modern cliché of the ‘found footage horror’ movie. It’s scary, heart racing fun for people who like to go to see these kinds of films and if you’re a fan of the Paranormal Activity series... essential viewing. If you got disheartened after that last movie in the series, you don’t have anything to worry about here... it’s back on track and is especially well worth a watch at the cinema in 3D because it’s used to enhance a plot point. And, like I said, I really hope this one does the numbers because I really want to see another sequel. A truly great movie, too, to spend this Halloween at the cinema with. Go see it soonest.
Posted by NUTS4R2 at 13:29