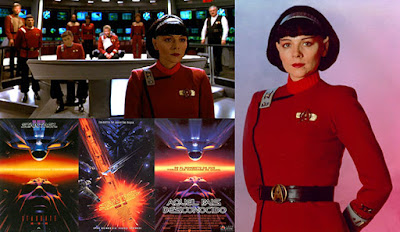 Where Iman Has Dorn Before

Warning: A big spoiler in that I will name the character
who betrays the crew of the Enterprise in this film.

“There is an old Vulcan proverb...
Only Nixon could go to China.”Mr. Spock, Star Trek VI - The Undiscovered Country

I’m gonna start this one by saying that David Bowie’s widow, Iman, plays a shape shifting alien in this movie and that Michael Dorn plays the grandfather of his Klingon character Worf, from Star Trek - The Next Generation, defending Kirk and McCoy in a trial scene about a third of the way through the film. So that’s explained my title to this one and you don’t have to hassle me about it anymore, right?

Star Trek VI - The Undiscovered Country is a movie which is very much a farewell film for the original cast of the Starship Enterprise. All but four of the cast would not return to the film franchise in the future. Three of them, William Shatner, James Doohan and Walter Koenig would return for scenes in the next movie, which is a kind of transition story, handing over to the crew of the TV show Star Trek - The Next Generation, and Leonard Nimoy would, of course, return for Star Trek XI (aka Star Trek... reviewed here) and Star Trek XII - Into Darkness (aka Star Trek - Into Darkness... reviewed here).

The film is  directed by Nicholas Meyer, who did such a bang up job on Star Trek II - The Wrath Of Khan (reviewed here) and, as with that one, he does a pretty good job on this one too. Although the film has an epic storyline to it, dealing with the political backdrop to the Klingon’s pursuit for a Peace Treaty with Starfleet, the venue for that story is a lot smaller in scale and not necessarily what people would have been expecting from a Star Trek movie, although I remember it was well liked at the time and I suspect it did good business at the box office. This one is pretty much a ‘whodunnit’ in space, pitched against an older, more contemplative crew of the original series who, like the central protagonists in Sam Pekinpah’s The Wild Bunch, are aware that they are reaching the end of their usefulness, or at least the perception of it by others, and perhaps reaching the end of their days.

The real problem with this movie, at least for me, is that it’s not a very twisty turny plot in terms of finding the identity of the person on the Enterprise who has conspired to assassinate the head of the Klingon Empire (said victim being David Warner, again, this time as a Klingon) and framed Kirk and McCoy for it. Once the Vulcan Lt. Valeris, played by future Sex And The City star Kim Catrall, is introduced, you can pretty much work out she is the prime mover on the Enterprise end of the conspiracy and, it has to be said, she’s a pretty good character. However, dramatically it could have been a lot better and, perhaps, less obvious in terms of the villainess in question, if she’d have stayed, as originally scripted, a semi-regular character from the movie franchise. Catrall was originally down to play the character as a returning Lt. Saavik but she didn’t want to be the third actress to play her (after the character’s appearances in the 2nd, 3rd and 4th movies) and so she was rewritten. What a shame, though, because dramatically, the weight of the betrayal would have been a lot stronger if it had been Saavik who had been the driving force in the first set of murders in this film.

This aside, however, it’s a pretty good movie with Mr. Spock even quoting Conan Doyle as Leonard Nimoy relishes the role of playing detective on the Starship Enterprise, while Kirk and McCoy struggle to survive in hostile territory on the mining prison they have been sentenced to. The rest of the regular cast have some great lines and scenes too, with George Takei’s Mr. Sulu character promoted and commanding his own Starship for this one. There’s even a tiny cameo by Christian Slater, who apparently framed his $750 cheque for the brief appearance... he just wanted to be in a Star Trek production.

The film is heavy on the Shakespeare references and quotes, both in English and the ‘original’ Klingon and this spills over into the subtitle of the movie, The Undiscovered Country, which was originally writer/director Meyer’s title for the second movie, before it was changed to the more familiar one by higher powers in the company. There are also some good references to past episodes in the franchise, with Kirk referring back to the death of his son in the third film... something which is used against him at his ‘show trial’ on the Klingon planet of Kronos.

The film is fairly breezy, although not nearly as light hearted as Star Trek IV - The Voyage Home (reviewed here) and it makes for some entertaining viewing, especially with Christopher Plummer hamming it up as a Shakespeare quoting Klingon General and, at one point, even spinning around in his chair. It’s also Mark Lenard’s last movie playing Spock’s father Sarek, although both he and Nimoy were filming their characters' appearances in consecutive Star Trek - The Next Generation episodes around this time. There are a lot of good things about this movie but there’s one member of the film’s crew who is absolutely amazing... composer Cliff Eidelman.

Meyer had originally wanted James Horner to return and score this film with him but, my sensors indicate that the composer’s ego had outgrown his usefulness to the franchise... or maybe he just didn’t want to work with Meyer again. When approached, Jerry Goldsmith also refused scoring duties, due to the terrible critical reception of the previous film in the series, or so I’m informed. Cliff Eidelman’s score, though, is easily one of the best in the series and I could never understand why he didn’t go on to score some major motion pictures after this, instead of having the career he’s had. Although the score is mightily reminiscent of Gustav Holst’s Mars, The Bringer of War from his Planet Suite (at the request of the director, is my understanding), it’s a major accomplishment and it manages to stay true to the style of scoring these films have had before... the big sprawling melodies, the small Vulcan atmospheres etc... while also giving it a lot of lift that a fair few other composers have failed to do in the history of the franchise. It’s always a pleasure to give this particular soundtrack album a spin because it’s also, as it happens, a great stand alone listen, too.

So there you have it. Star Trek VI - The Undiscovered Country is not my favourite of the films by any means but certainly one of the great, classic films of the Star Trek series and better than the majority of the movies that would come after (with one rare exception... when I get to the review, you’ll know which one I’m talking about, for sure). If you’re a fan of the original crew of the Star Trek universe then this is a definite must watch in the franchise and, despite a few future appearances by certain actors, a nice farewell to the original crew. May their memories live long and prosper.