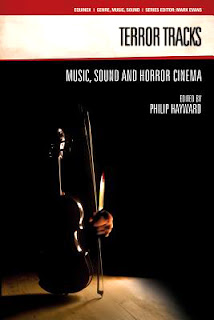 So here I am again, writing about a film music related book which I was really happy about finding on the shelves in Foyles and which, truth be told, I was less happy about when I started lurking between the covers. As is the fashion with some books on a broad subject these days, this tome consists of a number of different essays by different writers, each based on a specific sub-field... or perceived sub-field by the writers and editor, at any rate... of the topic at hand. I find these kinds of books a bit hit and miss to be honest but sometimes they can hold together pretty well, as was the case of The Psychology Of The Girl With The Dragon Tattoo which I reviewed here and which had a similarly ‘thrown together’ kind of structure. This book... not so much but, I’ll get to that later. Alas, Terror Tracks really is the epitome of a book that’s genuinely sporadic in its luminescence and perhaps my biggest problem with it is that there are just so many errors that have crept into some of the chapters.

For instance, in the third chapter on Sound And Music In Hammer’s Vampire Films (by Michael Hannan), the writer of that particular essay claims that the first Quatermass movie, The Quatermass Xperiment (reviewed here) was based on a TV serial called Quatermass. Wrong. Quatermass was the name of the fourth serial and it wasn’t even written and produced until decades after the Hammer movies were done and dusted. The movie The Quatermass Xperiment was based on the TV serial called The Quatermass Experiment. I really get annoyed when big errors like this find their way into printed form because a lot of people tend to take statements like this at face value and don’t always know that they are being fed completely false information. Admittedly, the writers don’t always know they are doing this either but, surely, this is a bit of a basic error to have gotten in there in the first place?

The same chapter goes on to say, and I quote;

“The studio's most enduringly popular monster was the vampire, represented in sixteen separate films, beginning with The Curse Of Frankenstein and ending with the Hong Kong co-production Legend of the 7 Golden Vampires.”

Wait, what? Seriously? In what corner of a parallel universe is the Frankenstein monster a Frankenstein vampire? Could the writer, perhaps, be getting The Curse Of Frankenstein, which was the first Frankenstein movie the studio put out, mixed up with the original US release title of the first Hammer Dracula movie (reviewed here), The Horror Of Dracula, released the following year? I’m guessing yes but, with this kind of hard, factual error I’m not in the position, as a reader, where I should be having to play guessing games with how the writer has managed to reach his so-called facts.

And it’s not just one writer who seems to be playing fast and loose with the truth either... Tony Mitchell, in his chapter on Prog Rock, The Horror Film and Sonic Excess: Dario Argento, Morricone and Goblin, tells us that the band Goblin were originally called Cherry Ripe. Um... nope. Their original name for commercially released work (they were called Oliver when they were working on demos) was actually Cherry Five... also the name of their first album, which is worth picking up from the Cinevox label if you’re a fan of their work, by the way. So I have no idea where Mitchell gets that from... unless it was changed by somebody else at the proofreading or typesetting stage by accident, perhaps? Either way, this glaring error has made its way into print.

Mitchell then goes on to criticise Ennio Morricone’s score for Dario Argento’s directorial debut giallo The Bird With The Crystal Plumage (which is not a horror film, by the way, and so perhaps should not be included in this book in the first place) as “bland”, some of which verges on “the banality of muzak”. Really? Many people would disagree with that, I would guess, although that’s a fair enough statement to make if you actually believe it. Why, then, would the writer then go on, later in the same article, to praise Morricone’s scores for Argento?

Worse than this, in the same chapter, we are treated to the wisdom that The Stendahl Syndrome was Morricone’s last score for Argento (another giallo too... not a horror movie as this book’s title implies). Well, all I can say about this is that, bearing in mind the composer scored Argento’s version of The Phantom Of The Opera two years after he worked on The Stendahl Syndrome, I find this statement a bit of a hard one to swallow. Yes, I agree Argento’s version of Gaston Leroux’s classic tale is probably something we’d all like to wipe from our collective memories but, just because many of us wish he hadn’t attempted it, doesn’t mean it doesn’t exist. Again... get your facts right.

Now, there are some good chapters in here too, it has to be said... although starting off with two essays by different people on Psycho really does nothing to endear me to a book which purports to be about music and sound for horror films and then starts off with two chapters about a suspense thriller instead. Psycho? Really not a horror movie, people.

However, Kyoko Koizumi’s chapter Creative Soundtrack Expression: Tôru Takemitsu’s Score for Kwaidan is extremely entertaining and Jeremy Barham’s section on Music as Context, Character and Construction in Kubrik’s The Shining is long but makes for some interesting reading. There’s even a wonderful section on what is a popularly (and perhaps inaccurately) perceived ‘modern’ trend in J-Horror in James Werzbicki’s chapter The Ghostly Noise of J-Horror: Roots and Ramifications, which also compares the timings and use of music in the original Japanese versions with their American remakes.

There are, perhaps, as many good chapters as bad and, even some of the ones I don’t agree with such as Christopher Leigh’s perception in his chapter on Music Of The Night, that human characters in modern horror are represented by pop music while the non-human characters are represented by classical styled representation... make compelling, if questionable cases. However, at the back of my mind throughout the whole book, which contains some interesting charts and illustrations of music and timings popping up in appropriate places, was the worry that... if there were so many facts glaringly wrong in some of the chapters which I was personally able to pick up on and which had been missed through all the proof versions, then surely there could be an equal number of errors in the other sections which I am not as knowledgable about to pick up on but, nevertheless, are still there, misleading me with false information.

So, yeah, Terror Tracks is a bit of a mixed bag to be honest and I’m not sure I’d recommend it to many fans of sound and film scoring, horror or otherwise. Perhaps I’d best not say too much because there are some things which are worthwhile reading here, so I'll just leave it to my friend's response when I texted him the statement about the Hammer vampire movies including The Curse Of Frankenstein. “Which book was it? I hope I do not own it.” was his quick reply.
Posted by NUTS4R2 at 12:09