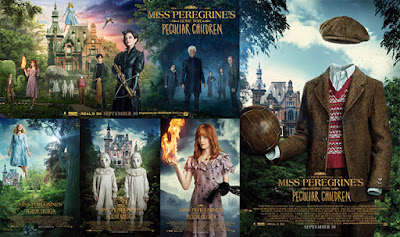 Play Miss P For Me

Although I’ve not read Ransom Rigg’s novel Miss Peregrine’s Home For Peculiar Children, the new adaptation once more continues my increasingly hit and miss (when once they were all hits) relationship with the cinema of Tim Burton. This is not one of my favourite films by him but, it has to be said, I did quite enjoy it in places although, in all honesty, there seems to be something a little less Burtonesque about the final product.

When I first saw the trailer for this film, and being unfamiliar with the book, I immediately thought it would be the kind of story telling that someone like Burton would want to be involved with, until I realised it was indeed directed by him. That being said, while the concept and tone of a film dealing with secret children with special powers who hide from their sinister and terrifying enemies by living in time loops where they never age through the years is, absolutely, something I would imagine this particular director would excel at (and to a certain extent, he kinda does), it doesn’t feel like the execution of the story is realised in a way which is consistent with other Burton projects in the past.

For instance, while the realisation of the children, their locales and the situations they find themselves in is full of imagination and peculiar whimsy, the look and feel of these elements seem to be just a little less wrought and twisted in the same way that the director usually pushes his visuals. Stylistically, it seems less controlled than usual but... perhaps that’s to be expected when the director himself has gone on record as saying that he did as much of this as practically and in camera as he could. It’s quite possible that this CGI element, removed somewhat from the equation (although there’s still loads of it, to be honest) is a contributory factor in my personal response to this piece of art. However, it is art and you are never going to get anything too naturalistic from Burton, you can be sure of that. On the other hand, in his early career, he still probably had a lot less to call on in terms of CGI effects than he’s used here... and those films always felt like they were coming from the same place.

Style aside, the film does still grab you from the very beginning and, although the follow through isn’t quite as good as the concept that’s being explored in the first half of the movie, it will intrigue most audiences I’m sure and, it has to be said, certainly give the viewing public an interesting ride.

My main reason for seeing this one was the casting of Eva Green, one of my favourite contemporary actresses, in the role of Miss Peregrine. Alas, she’s not in the film quite as much as you might expect, seeing that she is even mentioned in the title but... she’s in it enough and her absences from the screen at various times certainly contribute to the forward motion of the story as it unfolds. She is ably aided by a cast of children including Asa Butterfield and Ella Purnell as the two main male and female 'peculiar protagonists' and, it has to be said, the kids in this film really do a great job in this. They are all equally supported by a great cast including Samuel Jackson as the villain of the piece, Judi Dench (in what amounts to almost a cameo but she’s still pretty good here) and the always watchable Terence Stamp playing Asa Butterfield’s grandfather. I don’t want to give too much away about the temporal nature of certain passages of the plotting but Stamp is in it a little more than you might think he is going to be, after you get a little way in. This isn’t a throwaway cameo like he had in Star Wars Episode I - The Phantom Menace (reviewed here).

The acting is superb and the shot design, although less what I would expect from this director, is still quite beautful and it is, for the most part, fast paced enough to keep things going without losing the attention of the audience too much during certain sections. It’s inventive, has a moral heart for the people and the situations they find themselves in and, in a sequence which I knew must have been a labour of love for this director, has a scene which is pretty much a direct homage to Ray Harryhausen, as far as I’m concerned. There’s even what looks like an updated shot lift in one close up moment which had me thinking back to films like The Seventh Voyage of Sinbad and Jason And The Argonauts. All I’m saying is... if you like watching Harryhausen’s s skeletons, you’re in for a treat here.

There are also a few little things which annoyed me about the film, too, it has to be said. Such as why would an English girl who has been living in Great Britain for so long and who makes her home in a time loop in 1943 refer to an Underground Train Station as a ‘subway’? Sounds a little like an American anachronism to me. If you’re going to set a movie in a specific time zone in the UK then at least research the differences in the language of the time.

Another interesting point for me is that of censorship. Don’t worry, I’m totally against any kind of censorship other than self-censorship after a certain age. However, I think that before the age of, say, ten, then a child’s parent or guardian should make decisions about what might affect that child in a negative manner. Now, Miss Peregrine’s Home For Peculiar Children is rated a 12A over here in the UK. Which means that children under the age of 12 must be accompanied by an adult and, as it happpens, when I went to the performance on Sunday morning, the majority of the audience seemed to be in the 7 year old range... plus accompanying parents. That being said, this film is absolutely filled with graphic images of eye injury... minus any blood so that, presumably, censorship can be gotten around and a less damaging rating can be bestowed upon it. Which I don’t really agree with because, graphic violence which is bloodless just teaches impressionable minds that violence has no consequence.

And were talking about a lot of eyeball stuff here folks. I mean, the plot is such that the villains of the piece harvest the eyeballs of children so they can eat them as a means to bring themselves back into something closer to themselves before they had their ‘terrible accident’ (which is shown for us in flashback). People’s eyes are removed, bowls of them are eaten and, in a particularly gruesome scene, eyeballs are squished out with tentacles. I can’t but think that, with all that stupid fuss over films like Zombi (aka Zombie Flesh Eaters) in the 1980s, this film might well have made the Video Nasty list (and you can read more about two documentaries dealing with that peculiarly British phenomenon here and here). So I’m somewhat bemused that young children, who are pretty robust (as was pointed out by someone close to me), are allowed to see something which is, in my opinion, far worse than anything found in that particular Lucio Fulci classic (which you can read my review of here).

The other thing about this movie which deserves a brief mention is the musical score by Michael Higham and Matthew Margeson. Anyone remotely familiar with the films of Tim Burton would be able to tell you that almost all of his scores are provided by Danny Elfman. I can only, in fact, think of three Burton films which didn’t have an Elfman score and, I can’t help but wonder why he didn’t score this one. Don’t get me wrong, it’s a nice enough score but it doesn’t hit the same kinds of rhythms and arrangements that Elfman might have provided and so I also wonder if this is one of the reasons why this seems less like ‘a Tim Burton movie’ to me. Director and composer relationships such as the infamously torn one between Alfred Hitchcock and Bernard Herrmann or the amazingly long held one by Steven Spielberg and John Williams can sometimes be a battle of egos, I suspect, but it also sometimes leads to the best work being created by either of the two artists involved and so I have to ponder, since the score for this one is less a pseudo-Elfman score than Howard Shore’s amazing contribution to Tim Burton’s Ed Wood, if this is a big contributing factor to the way I mentally received the film in this case.

Either way, it’s not something I can definitively say yes or no to so I’ll leave that thought there and just round up this review by saying that, although it’s not as Burtonesque, nor as consistently brilliant as I was hoping, Miss Peregrine’s Home For Peculiar Children is still a pretty entertaining ride and worth a look if you like the idea of the art of cinema showing you something you can’t, quite, see in anyone else’s movies. A definite good night out at the picture palace for most people, I suspect, and certainly worth catching at the cinema if you have nothing better to do one evening. And, despite my evenly tempered reaction to it... I do hope Burton adapts some of the other books in the series. I’d kind of like to see where this goes.
Posted by NUTS4R2 at 12:13