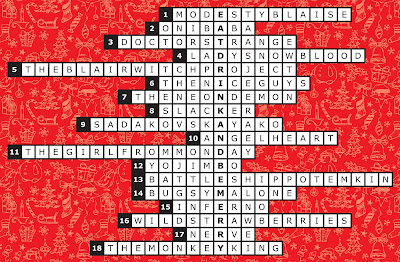 A big congratulations to the joint
winners of my 2016 Cryptic Movie Quiz...

Well done to them and a huge thank you to everyone who sent in their answers to the latest quiz. I hope you all enjoyed playing (which is kinda the point).

1. A less egotistical, traditionally English adopted drink behaving much more like a flaming headed Johnny!
Someone less egotistical may be considered modest. A drink traditionally associated with the English could be tea. So... Modest Tea. A flaming headed Johnny could have been Johnny Storm, the Human Torch but in this case it was Johnny Blaze, Ghost Rider.
So... Modesty Blaise.

2. Placed upon an Apple branded, bleeting sheep.
Placed upon is On. A sheep makes a ba ba sound. An apple branded product usually has an ‘i’ in front of it like iPod or iPad.
So... Onibaba.

3. Unusual, backwards fish on a rocky pinnacle.
Okay... Unusual could mean strange. A fish could be a cod. Backwards it would be doc. A rocky pinnacle is known as a tor.
So... Doctor Strange.

4. Drifting, frozen plasma is a tramp.
Drifting and frozen indicates snow. Plasma is sometimes another term for blood. As the song goes, the lady is a tramp.
So... Lady Snowblood.

6. A couple of bonfire night dummies from a city in France.
A traditional bonfire dummy is Guy as in Guy Fawkes. A city in France could be Nice.
So... The Nice Guys.

9. An unhappy and confused oak is speaking in poetry. A spiritual entity is proceeding positively but in reverse.
A confused oak? Well de-confuse it by rearranging it to ako. If it’s unhappy it’s sad. So Sadako. A spiritual entity could be a Ka. A positive exclamation is okay. Reverse it and you get kayo. That gives Kayako.
So... Sadako VS Kayako.

10. Rearrange the angle slightly and reshuffle the end of the earth.
Angle rearranged could be angel. The end of earth is an h. Rearrange it to the front of the word and you get heart.
So... Angel Heart.

11. That young lady stuck between Sunday and Tuesday.
Easy one here... The Girl From Monday.

12. Diminutively speaking James, it’s a greeting.
A greeting could be “Yo.” A diminutive form of James could be Jimbo.
So... Yojimbo.

14. See the insect and then send a letter to one.
An insect is a bug. If you see a bug that could be bugsee. Send a letter could be to mail a letter. One is one. Mail one.
So... Bugsy Malone.

15. To derive, by reasoning, in the negative.
To derive by reasoning is to infer. A negative is no.
So... Inferno.

17. Great French fiction writer finds himself in a muddle.
A great French writer for me was Jules Verne.
So unscramble his last name to get... Nerve.

18. Unlock to gain access on the Monday and the man is royalty.
Mon is short for Monday. If you unlock something yo need a key... so monkey. A royal man could be a king.
So... The Monkey King.

Thanks again all for playing. Hopefully I’ll get the time to do another one next year.
Posted by NUTS4R2 at 19:27