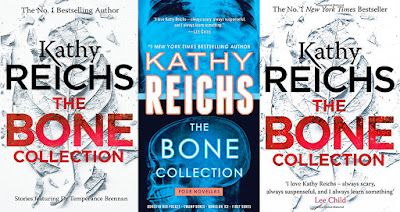 Most of my regular readers will know that reading the latest Kathy Reichs novel involving the exploits of her literary alter ego (as opposed to her TV alter ego of the same name), Temperance Brennan, is always my second Christmas ritual of the year. This year, however, the format is a little different and, I would guess, many of her most die hard fans may have already read three quarters of this book already... because it’s actually a collection of four short stories of similar length, only one of which has not been printed before in one publication or another. Luckily for me, I was unaware that Reichs had written any short stories about her literary counterpart/heroine at all so, yeah, these were all new to me.

The Bone Collection consists of three previously published tales - Bones In Her Pocket, Swamp Bones, Bones on Ice - and her new ‘origin’ tale as the last story of the book, First Bones.

Now anybody more interested in the soap opera style character development of the longer novels may find themselves a bit out on a limb here. For instance, Andy Ryan, Brennan’s longstanding on and off partner, had come to a very important ‘arrangement’ with her at the end of the last book. Anybody hoping to see the natural progression of that relationship will have to wait for another of the regular novels, although Ryan does make a brief and unexpected appearance in one of the stories... just not neccessarily in the way you’d expect.

As usual, the stories in this are excellent and well written. The first three, although mini adventures of everyone’s favourite forensic anthropologist, all follow Reichs' tried and tested formula... which is maybe not the best thing in terms of predictability but which certainly makes for entertaining reading. For example, the shorts are all split up into mini chapters and, yes, there’s still that little tease of an upcoming revelation at the end of each chapter, just like you’d get in the old pulp magazines which were ancestors of today's modern, popular crime writers. Kathy Reichs has always, I feel, been very ‘Doc Savage’ in her approach to the writing, building in mini cliffhangers at the end of each chapter and these work as effective ‘can’t put down’ page turners here... just like they always do. Foreshadowing the next big clue is something at which she is an absolute master (or should that be mistress?).

Like a lot of Reichs novels, the books are actually hinged around something she has a strong feeling about and the first two stories in this book are based around cruelty to some form of animal or other (trying not to give spoilers here) as the motive behind the various people murdered. And, as always, in her afterword to each story, she gives you details of how you can get involved and help the various causes trying to end this kind of thing by giving you links to the various web sites created by people who want, like any rational being would, an end to the kinds of practices detailed here.

The third story is set in Brennan’s home town but, strangely enough, it deals with a death on Mount Everest. You have to read the story to find out what Temperance is doing trying to piece together a body which has been frozen for a few years and then transported back to the US but it was inspired by a story which I found very interesting. The details are described in the tale themselves and Reichs confirms it all in the afterword. For instance, did you know that there are absolutely loads of dead bodies on Mount Everest which are out in plain sight but unrecoverable by sherpas because it’s just too dangerous to attempt. And furthermore, the ones wearing the most distinctive clothing kind of act as marker points for people undergoing climbs. It’s a morbid detail but one which Reichs uses to good effect in this tale which is set after a real 2015 earthquake which dislodged a lot of the unrecovered bodies and suddenly made them accessible to ‘rescue’.  I have to say, the truth behind the body that Temperance is working on didn’t fool me for a minute but... it’s an entertaining ride, as usual, getting to the end.

All through the first three stories we get the odd comment from Brennan about Andy Ryan and, if you have a good memory, the comments she makes reveal the age of the stories themselves and you can kind of work out where they slot in to the timeline of the full novels. Which is why I was wondering why the brand new story, First Bones, which was being touted as the ‘first’ Temperance Brennan story, is the last tale in the book.

Well, as it happens, it’s a flashback tale which is bookended from the 'bang up-to-date' version of the regular characters and tells of her first ‘case’, when she was still a student, retrospectively from the character’s life where she is now. And this is actually important in some ways because... something happens in this last story, in the contemporary sections, which is definitely going to change a certain constant element of the novels and which I seem to remember has been around since the first ones I read all those years ago. I’m trying hard not to give away any spoilers here but, if you're a regular reader of the good doctor’s adventures then you really need to read the last story in this collection... although I expect she’ll have to mention it in the next stand alone novel anyway. I completely didn’t see this one coming... which maybe goes someway to explain why I’m still addicted to the literary world of Kathy Reichs.

And that’s about it. If you’re a regular fan of the books then The Bone Collection is pretty much a necessary read as far as I’m concerned. Also, it’s nice to read short form stories from a favourite author sometimes. I’m not so sure it’s the best jumping on point for new readers, to be honest, because of the reveal in First Bones but there’s a whole back catalogue of books by this writer to explore if you are new to the world of Temperance Brennan. Either way, though, it’s an entertaining read and not to be missed.
Posted by NUTS4R2 at 12:24