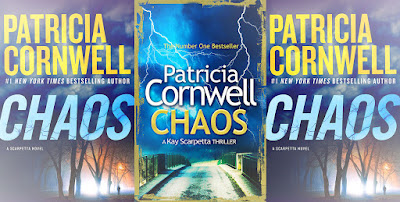 And here we go again with the first of my two regular Christmas literary rituals coming into play. Namely, the new Kay Scarpetta book by the amazing Patricia Cornwell. I suspect this one will be a fairly short review because there’s only so much you can say about a novel that’s so well written and perfect, easily confirming Cornwell as the top writer in her field... but I’ll have a go.

Unlike a lot of the Scarpetta books, Chaos starts off with an extraordinarily long lead in before the first dead body of the story actually arrives. This is, of course, to set up characters and to place them in the path of Cornwell’s two lead characters, Scarpetta and her FBI husband Benton Wesley, before pulling all the threads of her plot together. It also allows herself to set up the occasional red herring which is fine with me because, in all fairness, it actually worked with me this time and when a character does something with a bottle of water in the early stages of the book, I fell victim quite convincingly to her sleight of hand and was distracted in totally the wrong direction. I’m always really pleased when Cornwell (or anyone, these days) is able to surprise me when it comes to not telegraphing the ending of the story from early on.

And, of course, it goes almost without saying that Cornwell is so good at portraying her varied characters, such as Marino, her niece Lucy and Lucy’s lover Janet (who’s not in it very much), that although the lead in to the action is a fairly long one this time... I didn’t mind it a bit. She takes her time to explain things to the reader, embellishing the background in which her characters work with layers of reality so that, I really don’t feel slowed down at all. This is all great stuff and in the hands of a master writer like her, it just all works really well.

Another reason why this approach in no way messes with her writing style, which is in the first person from Scarpetta’s point of view (as the majority of them have been) is that this one is a good example of a story where Cornwell manages to do some interesting things with the passage of time. The whole story is set over the course of about a day, tops, with just a chapter or so at the end set a couple of days later and this way of structuring the story seems to be something the writer has been doing a lot of over the past few years. It’s also something she seems to excel at more than most who try the same tactic and she still seems to be able to both compress and expand time on a whim... which is really helpful in the somewhat manipulative art of fiction writing, for sure. Most of the book is set at the crime scene of the first body or the surrounding area and various characters make appearances at regular intervals to inform Scarpetta of certain plot developments as she works a crime scene and races against time to get the body properly attended to before she can have it transported to her autopsy rooms.

As the story unfolds, we are made privy to various cutting edge ideas and theories that someone in the author’s position has access to know about and it can sometimes be a quite sobering experience to read about terrifying inventions which could threaten the life of everyone if somebody got it into their head to build and use this stuff in a certain way because, well, you just know that if someone with Cornwell’s connections is writing about this stuff, then it’s probably a distinct possibility that it could happen (if it hasn’t already).

Regular fans of the series will be happy to know that certain long running antagonists and ghosts pop up from the past in this one, just as they have been for a couple of novels now, and that the way in which they pop up is sometimes surprising. The very last chapter, for example, when everything is supposedly said and done, reveals some surprising information about a fairly recently acquired character that I totally didn’t see coming and only had a hint of a couple of chapters before. So there’s some good stuff here and one has to wonder just how much forward planning the usually meticulous Cornwell is doing with her characters because 15 years or so from now, I reckon she’s left herself another thread she can pull on if she wants to.

And I’m really not going to say anymore about Chaos for fear of spoilers. I said it would be one of my shorter reviews and it certainly is. There’s not much else to say. Once again, Patricia Cornwell demonstrates why she is the queen of modern crime fiction, turning out a book that is taut, slow but evenly and suspensefully paced and... as I kind of expect from her these days... nothing short of a minor masterpiece. If you’re already a fan of Cornwell and have read the series from the get go, this is another ‘must read’ as far as I’m concerned. I wouldn’t say it’s a jumping on point for new readers but, if you are a new reader, go back to her early works and start from there because, frankly, her character progression is amazing. What more can one say? Well done again to a truly great writer... don’t miss out on the Scarpetta books. They are essential reading.
Posted by NUTS4R2 at 19:31