Theatre of Fear And Horror 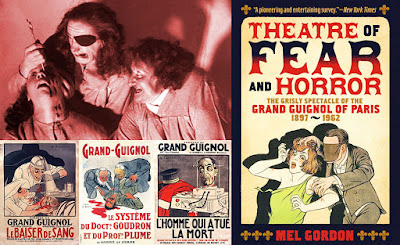 Grand Guignol is one of those terms which I’ve heard bandied about in various critical writings on literary and cinematic horror works for a long time. It’s almost  an overused cliché (although I am more than happy to use it myself when it gets the message across) and though most people understand it and the origins of the term, it’s nice to finally be able to have a book which takes you briefly through the 65 year history of the venue and all that it stood for. I, myself, first became acquainted with the term when some very small amount of information on it was available in either the first or second room of the Museum Of Moving Image (MOMI) on the Southbank when it opened in 1988 (a wonderful, if not always accurate, film museum in London which was, shamefully, ‘temporarily’ closed in 1999 and subsequently never re-opened).

Now, thanks to the kind Christmas gift giving of a very special friend, I have explored the story of the shows performed there in this great book, Theatre of Fear & Horror: The Grisly Spectacle of the Grand Guignol of Paris, 1897-1962, by Mel Gordon. The tome is split up into a few interesting sections and the first one details the entire saga of the venue with a few notes about what it was before it played host to the horror shows and then going on to detail important playwrights and the varying attitudes of their works, plus the reception of those works with the general public at large.

For those who don’t know, the Grand Guignol was a theatre in one of the raunchier, perhaps I should say sleazier, districts in Paris which would run programmes of short vignettes, usually involving themes based around sexuality but, most importantly, often incorporating lashings of gory violence with the, presumably very skilled, performers having to get their timing and sleight of hand as good as any stage magician to be able to pull off the trick of realistic eye gougings, acid burns, cuts, tears, limb lopping and the like to a fully expecting, but not always necessarily prepared, public.

Named after Guignol, the popular Punch and Judy character from Lyons, the theatre and its programme was so popular in France that it was listed in guide books and had audiences flocking from all around the world to take in the, mostly, unique and horror filled sketches, night after night. The real acid test for the actors and actresses, though, was the amount of faintings they had per night as a benchmark of their performance skills. As the writer says, “Between sketches, the cobble-stoned alley outside the theatre was frequented by hyperventilating couples and vomiting individuals.”

A typical tale, as described by Mel Gordon, can be found in this brief synopsis to a seasonal play, for instance... A Christmas tale of a poverty stricken woman in the last stages of pregnancy, unable to find someone to take her in (as Mary and Joseph were able to in their day), murders her child and throws the remains to the pigs in the fields while carols sound from the neighbouring village.

And there are a lot worse, in some ways, than this kind of thing in here and that, I think, is why various writers and critics over the years have used the phrase to metaphorically describe the sheer visceral horror of certain scenarios in art.

Gordon traces the origins of this tradition and shows how the horror and sexual content escalated when new writers and owners were brought in. Originally the plays were conceived as being new, unflinching and naturalistic tales which, obviously, included these strong, graphic elements as part of their daily bread. He also mentions a particularly interesting performer called Paula Maxa who met with an unfortunate demise 10,000 times in at least 60 different ways on the stage of the theatre and was also the victim of a stage rapist attack at least 3,000 times. I would love to see a full biography of this lady emerge some day. As it is, the writer reprints, in a later section, a longish and autobiographical newspaper story of her early years from the time, although I can’t really hazard a guess as to the truth of the claims made by Maxa here. This amazing little article written in her own words certainly whets the appetite for more information about this sensationalist performer who seemed more than happy to play and wallow in the kind of unsavoury elements found in the plays in which she performed.

The book also tells of the complete failure, despite its quite unparallelled success in Paris, that the Grand Guignol met with when the plays and actors toured in other countries such as Canada, America and over here in England. It’s also implied that, in some cases, these failures were quite possibly brought about by the xenephobic critics who may have had something against the idea of the French coming to their country. It also cites various foreign censorship bodies watering down the content of the shows in their territories as another reason why the touring thespians were forced to close their doors due to poor turnouts before their full season had finished.

After the story behind the venue, its performers and plays, we then get a lengthy section of brief synopsis of around 100 of the plays... of which there seem to have been many thousands. The summaries are rarely more than one or two short paragraphs each but they do serve to give some flavour of the breadth of grotesque pleasures which were on offer on a nightly basis. It also makes one wonder why nobody has tried to bring back a modern version in various theatre districts around the world... I would love to go and see one of these disturbing evenings myself. Ah, well... burlesque seemed to be making a comeback a few years ago so, perhaps, someone will get around to Grand Guignol.

After this section we get an archival essay on the nature of fear and the way in which people lap up horror and death by one of the vignette writers of the time. Reading it, the justifications could have been written by anybody working for the old Universal horror movies in the 1930s and their direct cinematic descendents. Actually, the cinematic legacy is briefly mentioned in the book, in a chapter discussing the influences on films like Robert Weine’s The Cabinet Of Doctor Caligari (one of my favourites), which, it argues, owes as much, if not more, to Grand Guignol than it does to German Expressionism.

The book also has a number of attractively reproduced colour plates of posters advertising the theatre over the years and there are also a fair number of monochrome photos throughout, showing details of some of the acts (so if you want to see grainy pictures of actresses having their eyeballs seemingly pierced by knitting needles, then you will find that kind of stuff in here). This is all followed up, at the end of the book, by the reproduction of the scripts of two popular Grand Guignol plays, both of which feature some nasty deaths to various protagonists and antagonists. I’m reliably informed that the scripts are from different plays depending on whether or not you get this new, revised edition of Gordon’s book or an earlier version.

And the book then ends, quite abruptly, on the final grim moments of the last reprinted play.
A common problem when I read books on an aspect of cinema or some other topic in which I am, fairly, well versed is that I usually find lots of incorrect things passed off as facts and it mostly really annoys me. I found none of this in Mel Gordon’s tome and the writing style was quite accessible throughout. Of course, my unfamiliarity with the subject matter in the first place leaves me in the position of not being able to recognise any bloopers within the pages even if they were there but, heck, it’s just nice to be able to read a book and not worry about that stuff for a while.

Theatre of Fear & Horror: The Grisly Spectacle of the Grand Guignol of Paris, 1897-1962 is a truly brilliant book and I count myself lucky to have received this splendid tome for Christmas. If anyone is already interested in this kind of horror theatre or has heard the term ‘Grand Guignolesque’ used to the point of insanity in various writings on the genre, then I would urge those of a sound mind to take a look at this volume. It’s an easy, uncomplicated read and it’s full of knowledge... just what a good book should be.
Posted by NUTS4R2 at 19:12