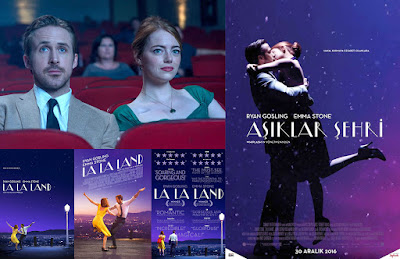 So it turns out that the new movie La La Land isn’t a great film... but it’s a pretty good shot at trying to shoot an old fashioned musical from a certain golden age of Hollywood’s history and, almost, really nailing it. I have a couple of reservations about it but I’ll bring those up in a minute.

I had the chance to see a preview of this movie at last year’s London Film Festival but I didn’t bother because a) I didn’t think too much of the lead actor and b) whenever someone tries to update the musical in a modern era, they usually fail abysmally. It was only towards the end of 2016, when I started hearing unqualified raves about La La Land on Twitter, that I got half excited about it and decided I’d probably check it out when it finally got a release over here.

Now, the film stars Ryan Gosling and Emma Stone as the two lead protagonists. I’ve always liked Emma Stone and think she’s an extremely talented and engaging actress. Ryan Gosling, however, is someone I’ve previously had a problem with and it was all based on one film, Drive, which he did okay in, to be fair, but which I thought was best summed up if you stuck and ‘L’ on the end of the title. I’d only seen him in that one thing, by choice, until I saw him in last year’s The Nice Guys... which I loved. Now my review of The Nice Guys is here but, in a nutshell, I hated both lead actors but went to see it anyway, on the strength of the writer/director of that film. And Gosling did great in it... winning me over especially with his Lou Costello impression in one scene. La La Land marks the second time I’ve quite warmed to a Gosling performance so I think I have to give him the benefit of the doubt, for now. The jury is still out but it’s 2 -1 to him and I’ll give him a chance next time I see his name attached to a project.

La La Land is a musical which stars Stone as an aspiring actress and Gosling as an aspiring jazz musician... two perfect career goals for your characters if you are making a musical, methinks... marrying the potential careers of these two characters to the format of the movie itself. So the writer was onto a bit of a winner there, right off the bat.

The opening of the movie is an ambitious but not great musical sequence set on the highway which put me in mind of Alan Parker’s musical Fame more than the kinds of 1930s - 50s musicals the film seems to be inspired by. It’s a sequence which is cleverly cut to make it look like one long shot (instead of a few long takes which I suspect is nearer the truth of its actual genetic, cinematic make-up) but my first big problem with this movie is clearly shown here and it didn’t impress me, it has to be said.

The problem with this and a lot of sequences in the film is that the songs are just not strong enough, I feel, to support the quite technically accomplished performances given by the actors and the crew in the service of La La Land. I actually found myself being more appreciative of the actual musical score between the songs, if I’m being honest and, for a musical, that’s probably not a good thing. That being said, although the tunes aren’t instantly memorable, they are repeated enough throughout the movie that by the last third of the film they do have a certain familiarity and, I suspect, if I were ever to watch this movie again, I’d probably get more out of them than I did here.

That being said, it does have everything else a great musical should have in it and, for the most part, it’s quite successful in hitting the notes it aims for throughout the running time. I’m a big fan of the late 40s to mid 50s MGM musicals and there are definitive homages to the formula used in such movies as On The Town, Singin’ In The Rain, An American In Paris and The Band Wagon, to name a few of my favourites, to be sure. Now, some of these sourced out sequences don’t, I would have to say, quite make it. The midfilm romantic number you always get is a sequence which the makers of La La Land have set at the same observatory as seen at the opening of Rebel Without A Cause and its the obvious moment where the lovers finally get to know each other and act out their musical harmonies. The surrealist element of these kinds of moments... well, you know, more of a surrealist element than bursting into song every ten minutes... which is a key ingredient of the form, is a lovely concept and it has everything going for it... I just think the resulting sequence is a bit lame. Then again, I always did find that mid-romantic moment in a lot of those MGM musicals a bit lame so, you know, there’s a good argument here that the director really nailed it.

One big thing it has got going for it is the sheer talent of the cast and crew at getting a lot of hugely subtle things timed right. Gosling, Watson and some of the other actors are absolutely gobsmacking in terms of getting some quite complex stage direction absolutely right and one can only stand back in admiration when you see these things. It’s one thing to marvel at the timing of Gene Kelly and Fred Astaire when they do some absolutely amazing things but when you get two leads here, for example, who are not noted for their ability to sing, dance or do some quite physically disciplined things... well I was pretty impressed by the performances, I must admit.

Now, in spite of these many jaw dropping moments, one of the things that makes La La Land a very good movie and not a great one, at least for me, is the lack of ambition to do something different with the form rather than just repeat it. Yeah, okay, there’s a certain wisdom in learning to walk before you can run but I felt like a lot of the sequences were trying so hard to get the atmosphere just right from those great musicals of yesteryear that they forgot to really add anything truly unique to the formula. which is a great shame but... well, combined with some musical numbers which don’t, as I said, have the strongest tunes and lyrics in the world then the film does feel kind of flat in some key places where I truly believe it could have shone. A lot of those musicals were pushing successive boundaries in their day and I would have liked to have seen something I hadn’t seen before here too.

However, that being said, by the last third of the movie I was blubbering uncontrollably at certain scenes and really cursing myself, I have to say, for having seen the trailer. All I’m saying is that, if you haven’t seen a trailer for La La Land before you see this movie... keep it that way. A certain shot in that trailer will telegraph a little ahead of time the kind of ending this movie has and... you wont’ want that. Every MGM musical I can remember from a certain period had a long, surreal and, for want of a better term, ‘arty’ sequence which would play just before the main plot elements resolve themselves. The movie makers use exactly the same tactic here but, well... there’s a point at the start of this sequence which you’ll be anticipating from the trailer and which will tell you everything you didn’t want to know about the ending which will be coming up later... which is a darned shame.

That being said, I’m not going to blame the director for that badly telegraphed ending... just the marketing people... and future generations won’t be lumbered with the trailer automatically before viewing like many people on the first release of a film are. So for future audiences this little wrinkle should iron itself out. At the end of the day, La La Land is a film that, although it starts of a little underwhelmingly, does build to a more immersive experience and there are enough visual movie references throughout the film to keep most cinephiles happy. It’s most important quality, though, is that it has a lot of heart and on that basis alone, not to mention the efforts of the hardworking cast and crew, I’d have to say that this one is definitely worth catching at the cinema if you fancy it. It doesn’t stand above many of the mesmerising musicals from Hollywood's furtive history but it can, with a pinch, stand alongside some of them and... that’s really no mean feat in today’s movie marketplace. It’s probably a good ‘date movie’ too so, you know, give it a go maybe.
Posted by NUTS4R2 at 19:52