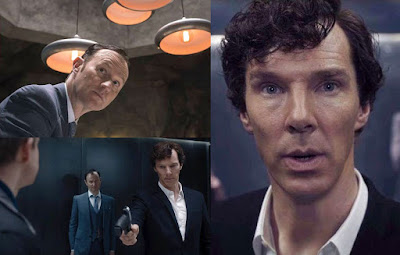 Oh rats. This is absolutely not the review I wanted to be writing today, in the wake of last night’s season finale of Sherlock. The show has been a bit hit and miss since it first started and there’s usually one clunker per series but... yeah, The Final Problem isn’t good. In fact, I would go as far to say that it’s not only the worst episode of this series... it’s the worst of all four series. Not a good one at all and, ultimately for me, very disappointing.

Okay... so was fully expecting the re-entry of Mary Watson into the plot this week. Perhaps a continuation of her back story thread and how it was, maybe, intertwined with Moriarty and Euros Holmes but... nope. She has a brief cameo where she enters the show via another video clip at the end and I mention this here purely to justify the title of this blog post. I was going to be using this title whether she reappeared or not, you see... I didn’t want to waste it. Alas, my ideas at the continuation of her storyline seem almost blown out of the water... up to a point.

And that point is... I’m now forced to give up on the idea that Molly Hooper was behind everything. The Molly-arty figure, so to speak. Alas, she remains a footnote in the lives of Holmes and Watson and I think that’s a waste of a great character and, indeed, a great actress. In fact, the entire episode seemed a waste of great actors and actresses, to be honest, because if there’s one thing you couldn’t fault here... perhaps the only thing... it’s the quality of the acting from all the usual suspects in this. So Cumberbatch, Freeman, Gatiss etc were all exceptional in this one... they just didn’t do very well as characters, I would say. I know the plot was dealing with things from childhood but I don’t think they had to make all the dialogue that childish. Also... it all seemed a bit too theatrical and cypherish, to me. Which is a shame.

On that subject, though, the one member of the cast who really won out in all this stuff was, in fact, the wonderful Louise Brealey in her one scene here as Molly Hooper. She played it in such a way that you really wanted to know what kind of day she’d been having and why she was responding like she was. It was a brilliant scene and pretty moving and her performance made you wonder why the heck the rest of the characters hadn’t been written as well as that this time around. This scene between her and Sherlock, at least her side of it, seemed to be the only ‘real’ and moving thing happening in the entire show, to be honest.

On the subject of Mary Watson... well there’s room for another series in a few years if they decide to go down that route and it would be a fairly simple matter, I would have thought, to bring her back into the role. Of course, the split between Amanda Abbington and Martin Freeman probably makes that highly unlikely now but, I’m certainly not going to rule that one out yet. Especially since I want to know who mailed the P.S. DVD she’d recorded at the end of the episode.

Okay, so there was a lot not to like in this and I really don’t want this to turn into a laundry list of complaints. Especially since I’m still really keen on the series and most of the people I know have now given up entirely on it and haven’t even bothered with Series Four. I still think it’s a good show and, honestly, one really bad episode out of three is not too bad an average, is it?

Okay... so things like the absurd skill at reprogramming people that Sherlock’s sister has really does go into the realms of fantasy. Yeah, I know there are real life precedents for this kind of thing but they really whacked this up to the Nth degree here. On the other hand, Sherlock is pretty much an invincible breed of super science hero and, maybe it’s fitting that his latest nemesis also has super powers of her own, so to speak.

There’s also the question, by way of an example of shoddy ‘run through the wet paint before someone sees you’ writing issues inherent in this week’s installment, of why Sherlock, Mycroft and Watson would feel the need to break into the compound in which Sherlock’s sister, Euros Holmes, is supposedly imprisoned when Mycrioft pretty much outranks the top brass there anyway. If they suspected the lunatics were already running the asylum then they should surely be better prepared for what was waiting for them. If they weren’t then... why the heck would they break in there in the first place? They could just walk in with authority over everyone there. So, yeah, taking the time to prove that security is lax seems a bit of a stretch of an excuse to show those kinds of action scenes here, methinks.

But all this, however, is distracting me away from one of the main reasons why I had a hard time with the episode.

Simple as that. I kept checking my watch to see how long we had to go because it was dragging. There were no interesting plot twists or developments and even the media induced enhancements were few and far between and certainly didn’t add much when you noticed them. About the only little clever thing I did like was the shot of the ashes from Musgrove Hall continuing to rain down on Mycroft in Sherlock’s study at the aftermath of his story... quite liked that nice little touch but there just wasn’t enough of this kind of inventiveness, I felt, in this episode. I got quite bored by the end of this one.

So there you have it. The Final Problem was not much of a series finale and, from what I understand, I’m not alone in that conclusion. I was actually going to part with some cash in a week or two to buy the complete series blu ray coming out next week but, after seeing this clumsy nightmare of an episode, I’m not sure I’d want to after the disappointment of that climax. I’m still hoping that we’ll get another series in a few years’ time (preferably with lots of Mary and Molly in it) but for now... well... I’m kinda glad they’re all taking a break from it, to be honest.
Posted by NUTS4R2 at 19:28