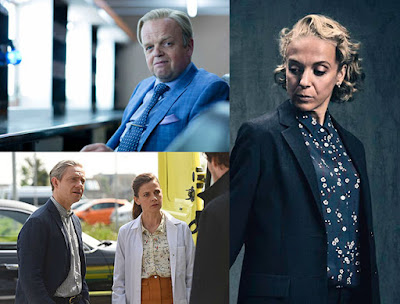 Warning: Spoilers from the outset.

And here we go again. This is an almost text book episode of what Sherlock is all about and what it’s always been about since the very first episode aired... It’s all about being very clever in its use of the media to both play with the way the content and information is delivered to good dramatic and comic effect while still using the flexibility of this rug-pull of a malleable breaking of the fourth wall, on a purely narrative level, to be able to wriggle out of anything. For that reason, I really loved it. However, another thing that has remained consistent throughout the majority of the series is the fact that on the level of the actual content delivered... and I mean the writing and its inability to use those same techniques to sustain trust or be anything less than obvious, for the most part... it lives up to its normal standard and is also, unfortunately,  fully represented in the chemical make up of this weeks episode.

In other words, it was an entertaining romp but, unfortunately, not clever enough by half.

Now then... this didn’t stop me enjoying this one, I have to say, and I found it to be a much stronger episode than the previous one but... it felt like a stop gap so Holmes can get Watson on board again after the ‘possible’ death of his wife in the previous episode. And, yes, I’m still not buying into that whole ‘Mary is dead’ idea just yet... if I’m going to make myself look stupid on that front then I can at least drown properly without flapping my arms this way and that in terms of my suspicions of where the last episode might end up.

So, despite the excellent performances of all the usual suspects in this one... Benedict Cumberbatch, Martin Freeman, Una Stubbs, Rupert Graves and Mark Gatiss... not to mention the always brilliant Toby Jones playing a really unlikeable serial killer who, alas, because the writing telegraphed his character too much, wasn’t surprising anyone (but, as usual for Jones, he did it so well)... my attentions were fixated on just two things throughout this episode. One of them was the whole Mary Watson thing and I’ll get on with my one last chance at second guessing that in a minute. The other thing was... alas... thrown in my face, so to speak... and that also had its roots in the previous episode.

In last weeks episode, Dr. Watson had a dalliance, albeit in text form, with another woman. This week... after I was sure that Holmes wasn’t actually talking to a dead woman... another character in the story had some chips by the River Thames with Holmes and, at that point, my thoughts marinated  to... wasn’t that the lady on the bus from last week but with different coloured hair? And then I told myself I was probably wrong and moved on until another scene with Watson and his therapist and, looking at her I thought... no, wait! Isn’t that the woman from the bus from last week? And then I moved on again because... well I kinda stopped playing that game and I assumed my gut instinct was wrong. Well, it turns out I was completely right in that all three women were, in fact, the same person... the only thing I didn’t quite see coming was her relationship with one of the main characters but.... yeah... you know... my gut was right.

And so I’ll come to Mary. I’m still not convinced her death wasn’t staged... possibly by Mary (and Molly... and I’m still not giving up on my Molly-arty theory either, for now) and the reason I’m still clinging onto this sad conviction that she might still be alive (at least until the conclusion of next week’s episode, at any rate) is because Moffat seems keen to make it seem almost impossible to the viewers at home that she could be anything but dead. So we have the ghost of Mary Watson talking to John Watson and giving him advice... or do we? Well, it was stated and is quite obvious that the ghost of Mary Watson is just a projection created by John Watson to deal with her death and... well... that psychological manifestation doesn’t have to mean that she’s actually really dead, does it? As long as John believes that she’s dead then he can have whatever ghost he likes playing around inside his brain. And that’s where I am at the moment and part of me sincerely hopes I’m wrong in my suspicions because, frankly, it would be nice if Moffat and Gatiss were able to run my mind around in little circles because I hate being right about a lot of the stuff I see on TV and at the movies... kinda numbs the emotions, so to speak. Time will tell... seven more days of that man made temporal construction known as a week should reveal the end game on this one... we shall see.

Other than all that though... great little episode despite the obviousness but with the quality... and this is a gift that Moffat seems to have... to still inject great dollops of humour into the programme even when the two main protagonists of the series are in their darkest places. Some of the dialogue, as always, was pretty wonderful... it’s just the broader strokes on these things which sometimes screw these up a little, methinks. So... wonderful performances, cool and innovative use of the medium to show things in the usual, marvellous, Sherlock manner and, as always, a really nice score by David Arnold and Michael Price which comes out on CD on 27th January (if you were wondering... pre-order it specifically from Silva Screen before the release date here now and you should get the special limited bonus disc of the score to The Abominable Bride thrown in too, if you get your skates on).

Despite some obvious moments, not a bad bit of viewing for a Sunday evening. British television has still got it, I reckon, and Sherlock is very much one of our finest exports. Looking forward to the next one now... just to see if any of my wild theories are right.
Posted by NUTS4R2 at 13:20