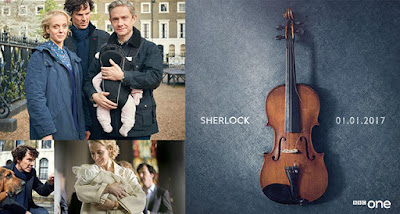 Warning: A big spoiler for this episode and a possible speculative spoiler for the third episode being broadcast in a couple of weeks. All this will be clearly marked in the text.

Okay, so we’re finally on what is being touted as the possible last series of the BBC programme Sherlock. I’ve been kind of a fan since the first episode although my level of enjoyment has been really hit and miss, to be honest. Usually, the easier I see the solution to the episode, the less I’m likely to enjoy it... although there have been some fairly interesting stylistic choices, coupled with some good dialogue writing, throughout the programme's run.

The latest episode is now, as I’m being continually reminded on Twitter and elsewhere by an audience who seem to be fast running out of patience with the last series, more of a soap opera rather than stand alone cases but, honestly, that’s part of the appeal for me. I always tend to value character development and progression above the content of a story so this show is absolutely doing something right for me... otherwise I would have stopped watching sometime in the first series, I suspect.

This episode is all about the perceptions of events, if I’m right about certain things...

For instance, we have John Watson being lured by a honey trap and there’s a certain feeling that the progression of what may or may not have happened between him and another, as yet unknown, character is somehow involved in a bigger end game than it first appears. In fact, the episode starts off with Sherlock Holmes being called to get rid of Moriarty and being asked what he will do about the very real ‘threat from beyond the grave’ of his regular nemesis. When he says that Moriarty is dead, I think he is right to a point but I suspect there’s a bigger end game which is ‘afoot’ here.

The episode was a rich in entertainment, if not quite as enthralling as I’d hoped, hotchpotch of absolutely top rate performances of all the usual suspects - Benedict Cumberbatch, Martin Freeman, Amanda Abbington (as Mary Watson, my favourite one in the show), Rupert Graves, Una Stubbs and Louise Brealey as Molly Hooper, who I’ll mention speculatively in my possible spoiler section. And, of course, we have Mark Gatiss playing Mycroft wonderfully and he also wrote this episode, with his usual display of good taste and furious pacing.

Okay, so all the red text below contains the big spoiler for the episode and also contains possible spoilers for the conclusion of the series...

When, a few weeks ago, Martin Freeman announces that he and Amanda Abbington had called off their long standing relationship I was somewhat disappointed (purely, I guess, because their on screen relationship is easily mistaken for their off screen one to casual viewers like myself and they make such a nice couple). It also signalled to me that there was a strong possibility that the Mary Watson character would be written out at some point in the near future and, as it happens, that’s what seems to have happened in last night’s episode. She knocks Sherlock aside and takes a bullet in the heart that was meant for him. And I was upset about this because a) I thought they’d wait until the final episode of the series to do this and b) I really love the character so much. However, after waking in the middle of the night where my brain must have been clearly occupied with this problem, I’m now beginning to think I was right... they might be waiting until the final episode to kill her off, or maybe not kill her off at all.

That is to say, and it may be very wrong and wishful thinking to say this, that I think there’s a strong possibility that Mary’s death could have been staged to help convince the real enemy that Holmes and Watson are no longer working together and then, in some way, get the villain of the piece to overplay their hand. After all, it wouldn’t be the first time a character in the show has had their death faked. I might be wrong but... I don’t think we’re quite done with Mary Watson yet, to be honest.

I know it’s a wild theory and I kinda hope I’m wrong about it so my respect for Moffat and Gatiss goes up but... I think that the death was faked for reasons pertaining to a ‘long game’ Holmes is playing against Moriarty. And when I say Moriarty, I mean the person who created Moriarty in the first place. Now Molly was one of many at the big showdown and saw Mary Watson die. She’s even helping Watson with their daughter. However... isn’t she the first person we saw in Series One with Moriarty? Is she, and this sounds a little ludicrous as I type it but it’s just my fan theory so give me the benefit... but is there a chance the murder of Mary was staged specifically for her to witness and she could be, in fact, Holmes nemesis. After all, Moriarty’s ‘ghost in the machine’ seems to realise Holmes is still alive and Molly was the one who helped Holmes fake his own death at the end of Series Two. So maybe she is the mind behind the whole game, as it were? I don’t know and I’m probably going to be proven wrong about all this but at least I’m writing it here in this blog so, if it is just wild fiction on my part, you can all see me getting it wrong in public. Hopefully, if I am wrong, you won’t stop reading my reviews because of it. ;-)

And so that’s that for the latest Sherlock. We shall see where we are after next week’s episode, which I expect may be a ‘mostly’ stand alone story. I’m looking forward to it because it’s got Toby Jones in it and I think he’s a terrific actor. And I’ll try and get the review of that one up either on the Monday or, more likely, the Tuesday after it airs. So hope to see you here again in a week or so.

And for anyone playing this year’s cryptic movie quiz... I hope to get the results up either tomorrow or the day after. Hope you enjoyed playing.
Posted by NUTS4R2 at 11:33